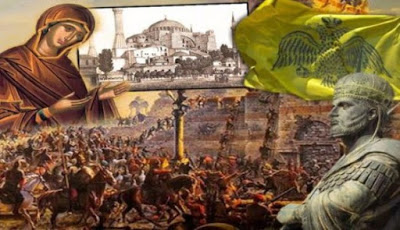 According to legend, after the fall of Constantinople to the Ottomans in 1453, three Venetian ships fled the city filled with various relics to avoid their capture by the Turks, but the third which carried the Holy Altar of Hagia Sophia, sank into the waters of the Bosphorus in the Marmara region. Since then, in the exact area of the sinking, the sea is always calm and serene, no matter what weather conditions are prevailing in the area. This phenomenon is testified by modern Turkish scientists, who have attempted at various times to discover the cause of this strange phenomenon, but due to the muddy composition of the seabed, their efforts have been fruitless.

In the book by Dorotheos of Monemvasia titled A Chronicle from the Creation of the World Up to 1629 (1781), we read: "The Venetians took the most wondrous and famous Holy Altar of Hagia Sophia, the much valued and most beautiful, out of the Temple and onto a ship, and as they set sail and headed for Venice, O the miracle! Near the island of Marmara the ship opened and out fell the Holy Altar into the sea, sinking where it remains today, and this is obvious and testified by many, for that entire area, when there is a storm, and the waves of the sea become fearsome, there is calmness in the place where the Holy Altar is and the sea remains undisturbed. And they go there with boats, to take water from that part of the sea where the Holy Altar is, and it smells of a wonderful fragrance, from holy myrrh and other fragrances."

The father of Greek folklore, Nicholas Politis (1852-1921), writes about the incident: "The day the City was taken, the Holy Altar was placed on a ship, to take it to France in order to not fall into the hands of the Turks. But there in the Sea of Marmara, the ship opened and the Holy Altar sank to the bottom. In that spot the sea is like oil, no matter how much of a sea storm is taking place around it. And this spot is always known by the calmness which is always there and the fragrance coming from it. Many have even been made worthy to see it in the depths of the sea."

It could be just another myth that has managed to survive for centuries in the hearts of the Greeks. But according to the local Turks of Istanbul today, this spot in the sea remains a real unexplained phenomenon. Jason West10/18/2020 7:36 am
When we take back the Holy City we will retrieve the Holy Altar from the sea floor and restore it back into the Hagia Sophia and then everything will be as it should.

Sally Iloff1/11/2016 6:10 am
What is made to serve God always remains to serve God in original form. God bless this holy place in the sea!
×