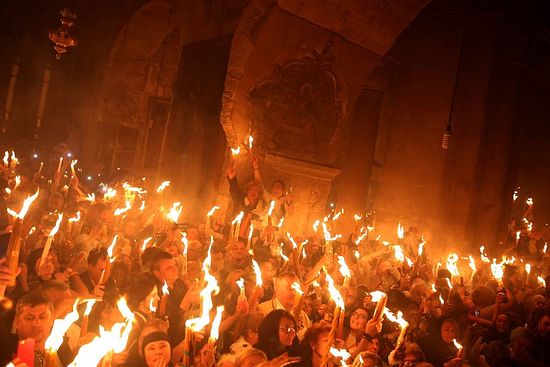 For the first time ever, the Imperial Orthodox Palestine Society (IOPS) will deliver the Holy Fire from Jerusalem to Russian parishes in London, head of the IOPS youth department Maria Korovin told RIA-Novosti on Wednesday.

The Holy Fire appears annually on Holy Saturday, descending from Heaven to light the candles of the Orthodox Patriarch Jerusalem praying and waiting in the tomb of the Lord, and from there is distributed to churches throughout the Orthodox world. This year the flame will be carried in specially-made lampada-capsules on a direct flight to London, and immediately brought to the Dormition Cathedral of the Sourozh Diocese of the Russian Orthodox Church, and to the Russian Orthodox Church Outside of Russia Cathedral of the Dormition and the Holy Royal Martyrs.

“It is gratifying that by the efforts of the Imperial Orthodox Palestine Society the area of care for Orthodox believers will be expanded this year, now including the British Isles. The Russian diaspora in England is constantly being replenished with young people, which undoubtedly speaks to the preservation and enhancement of the cultural and spiritual foundations of our faith. If before the Holy Fire was brought to Russian benefactors in Belarus, Ukraine, and other CIS states, then now we can proclaim the Paschal joy in European countries: in Great Britain, Serbia, Italy, Latvia, Estonia, Germany, the Czech Republic,” said Korovina.

“The Holy Fire will not only unite Jerusalem, London, and Moscow, but will also sanctify special pages in the history of our countries,” she added.

The history of the IOPS, celebrating its 135th anniversary this year, is inextricably bound to the British royal family, as Grand Duchess Elizabeth Romanova, the second chairman of the IOPS, was the granddaughter of Queen Victoria. Holy Fire to come to Russia at Pascha
By the blessing of His Beatitude Patriarch Theophilos of Jerusalem and His Holiness Patriarch Kirill of Moscow, the Holy Fire will be brought from Jerusalem to Moscow at Pascha again this year.