Met. Seraphim of Piraeus calls upon Erdoğan to give up false religion, turn to Christ 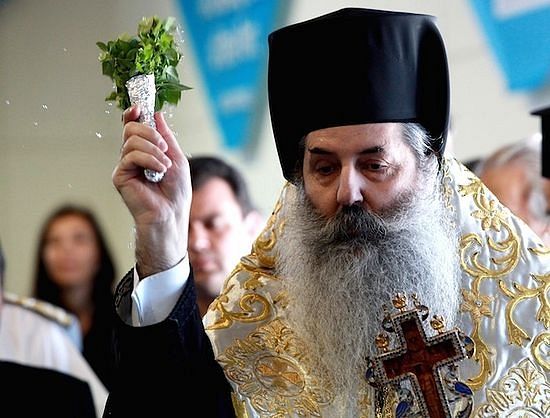 The staunchly traditional and outspoken Greek hierarch Metropolitan Seraphim of Piraeus has written an open letter to Turkish President Recep Tayyip Erdoğan, in which, among other things, he calls upon him to turn from the false religion of Islam and accept “Christ the Savior and Redeemer of the world,” even advising him who to take as his godfather, reports AgionOros.ru.

Beginning with an analysis of the crisis situation in the Middle East, the metropolitan writes that good relations between Turkey and Russia are “very important,” and stresses that they are what allows Turkish authorities to speak equally with the US and the European Union.

The prelate goes on to express his confidence that in the case of Turkey’s failed attempt to join the EU, the president has already for many years been preparing “Plan B”—the recreation of the bygone glory of the Ottoman Empire.

“Every state would like to have a political leader who respects and confesses the religion of the majority of its people,” Met. Seraphim stressed, calling Erdoğan the destroyer of Kemal Atatürk’s secularized Turkey, and the restorer of Islam in Turkey.

However, the choice of Islam as a consolidating factor is, in the Greek bishop’s view, of course a mistake.

The metropolitan then goes on to offer in his letter a number of historical and theological examples demonstrating the “fallacy of the Islamic religion,” arguing that “it is based on a number of illusions.”

As a conclusion to the many-paged religious and theological study, the hierarch of the Greek Orthodox Church calls upon the Turkish president to denounce his “demagogic false religion,” and “for the sake of true benefit to [him]self and [his] family and [his] people… to repent, reject [his] delusions, and believe in the God-Man Christ, the Savior and Redeemer of the world.” He advises him to undergo catechism and accept Orthodox Baptism, further advising him to “ask [his] current ally, the president of Russia Vladimir Putin to become [his] godfather, and the Patriarch of Constantinople himself to celebrate the Mystery.” Turkish textbooks: “Christians are instruments of hostile forces”
The Ministry of Education of Turkey is continuing to carry on an ideological and intensified struggle against Christianity and Christians using history textbooks.
Comments

FOMA DOBROV4/20/2017 2:20 am
Met. Seraphim did his just duty and it is done. It is between Mr. Erdogan and True God how his soul will continue or not. Now that is has been said, if he continues to be a Muslim that is his decision or not. If one CONTINUES to preach to him that is a classic case of "Pearls to Swine" by definition. The First Try is not, beyond that it is. Fr. Daniel Sysoev in his "Questions to Priest" covers this well. One of my most recent reads. We shall see!

MJC4/15/2017 9:42 pm
This was done in response to Erdogan praying in Hagi Sophia yesterday, on the day of Christ's death. Our holy hierarch was merely pointing out the truth and calling him to repentance. AXIOS! AXIOS! AXIOS!

F.S4/15/2017 5:47 pm
T.D, it's not up to any of us to decide whether or not calling someone to the truth is "futile" or not - Christ even said so himself. We should tell anyone and everyone the truth and let them decide whether they want to listen or not. I think what the Metropolitan did was admirable and I wish all priests and bishops had that approach - if they did there might actually be a true revival of faith in many Orthodox countries and communities and many would also convert. No offense, but with your attitude Christianity would never have spread outside of Jerusalem!

Anthony4/15/2017 10:18 am
Whilst I like Mitro, Pireaeus Serafim, I do have to wonder why he would waste his time undertaking such a pointless, futile act. How many prayers could have been said during the time wasted. The time that will never be regained. If he really felt the need to write a letter, perhaps it should have been to the phanar encouraging him to reject his heresies and the falsehood of ecumenism to repent and return to our Mother the Church. Now that would have made more sense.

T.D.4/15/2017 12:33 am
An exercise in futility. Is this supposed to be satire or does the Metropolitan actually think he can convert Erdogan? Putin be his godfather?!! He just desecrated the Hagia Sofia and he thinks he will now convert?
I'm speechless.