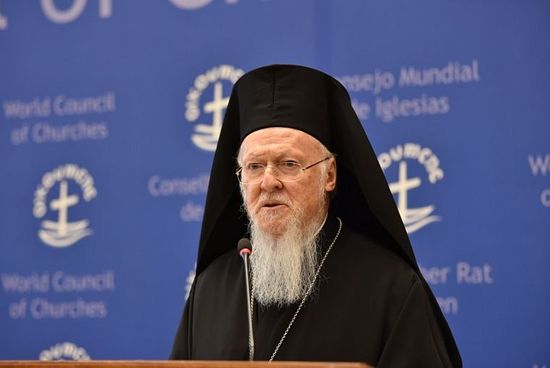 In Geneva to celebrate the 50th anniversary of the Orthodox Center of the Ecumenical Patriarchate in Chambésy and the 25th anniversary of his enthronement to the Ecumenical throne, His All-Holiness Ecumenical Patriarch Bartholomew delivered an address to the World Council of Churches (WCC) at Geneva’s Ecumenical Center yesterday. The patriarch focused on Constantinople’s historical involvement in the ecumenical movement and last year’s Cretan Council’s place in that work, and also commented on environmental and children’s rights issues.

The patriarch opened his speech to the inter-Christian gathering citing the words of the Psalmist: Behold, how good and how pleasant it is for brethren to dwell together in unity! (Ps. 133:1), before recalling that it was the Ecumenical Patriarchate itself which nearly a century ago called upon “all the Churches of Christ everywhere” to establish the ecumenical body, and which became a founding member in 1948. He also spoke of the personal inspiration he received from Ecumenical Patriarch Athenagoras, who lifted Constantinople’s anathema against Rome on Dec. 7, 1965, which set him on his lifetime course of ecumenical endeavors.

In this vein, His All-Holiness spoke of last year’s council on the island of Crete which gathered representatives of ten of the fifteen autocephalous Orthodox Churches, and which produced six documents addressing a variety of issues facing the Orthodox Church in the modern world. The council was conceived as a gathering of representatives of fourteen of the fifteen Local Churches, but the Churches of Bulgaria, Georgia, Antioch, and Russia pulled out for various theological and canonical reasons. The autocephalous Orthodox Church in America was not invited to take part in the pan-Orthodox synaxis, as the Ecumenical Patriarchate does not recognize the autocephaly that it exercises.

Patriarch Bartholomew noted that “for us, as Orthodox, synodality constitutes an expression and demonstration of the mystery of the Church itself,” and thus “’Coming together in one place’” comprises a characteristic of the Church’s nature.” The Orthodox system of autocephalous Churches can sometimes make it hard for the Church to speak as one, and sometimes breaks down into a system of a “federation of Churches,” which leads to the various Churches becoming introverted and self-serving, the patriarch reasoned. Thus, the mere fact of gathering representatives of ten of the fifteen Churches constituted a success in itself, His All-Holiness stated.

He noted that the council was necessary to address problematic issues such as the Orthodox diaspora, which his patriarchate perceives as rightfully falling under his jurisdiction as “barbarian lands,” before focusing on the council’s role in ratifying “Orthodox participation in the efforts toward the reconciliation of unity among Christians through the so-called ‘Ecumenical Movement,’” which until then had been decided upon by each individual autocephalous Church.

The first-among-equals invoked the Lord’s High Priestly Prayer that all of them may be one (Jn. 17:21), saying, “We Orthodox strongly believe that the aim and the raison d’être of the Ecumenical Movement and of the World Council of Churches is to fulfil the Lord’s final prayer,” expressing the implicit conviction that the Church is not yet whole. He quoted several times from the document “Relations of the Orthodox Church With the Rest of the Christian World,” which has proven to be the most controversial of the council’s six documents, and which stated that Orthodox participation in the ecumenical movement and worship services of the WCC does not violate the nature of the Orthodox Church as the one, true Church of Christ, but rather constitutes a valid expression “of the apostolic faith and tradition in new historical circumstances” (Relations, 4).

It should be noted that not all agree on this use of the John 17. Concerning the Lord’s High Priestly Prayer, Fr. John Romanides writes, “Christ prays here that His disciples and their disciples may in this life become one in the vision of His glory (which He has by nature from the Father) when they become members of His Body, the Church, which would be formed on Pentecost and whose members were to be the illuminated and glorified in this life… Of course this prayer implies the entry into these states of cure by non-members of the body of Christ, but it is certainly not a prayer for the union of churches.”

The documents of the council, signed by ten of the fifteen Orthodox primates, and various members of their respective twenty-four member entourages, constitutes the “synodal voice” of the Church, in the patriarch’s words, through which the Orthodox Church reiterated its commitment to dialogue, especially with non-Orthodox Christians. Quoting again from the Relations document, he styled the efforts of those individuals and groups opposed to ecumenical activities, zealous for emphasizing the already-existing unity of the Orthodox Church of Christ, as “efforts to break the unity of the Church… worthy of condemnation.”

Patriarch Bartholomew closed his address again quoting from the Relations document, expressing the conviction that there is as yet not one flock of the Lord, and the hope that the ecumenical movement will create this unity which we confess daily in the Nicene Creed: “This is why the Holy and Great Council prayed ‘that all Christians may work together so that the day may soon come when the Lord will fulfill the hope of the Orthodox Churches and there will be one flock and one shepherd (Jn 10:16) (Relations, 24).” Patriarch Bartholomew awarded for commitment to ecumenism
Meanwhile, in his letter the pope entrusts the patriarch, his “dear brother Bartholomew,” to the protection of St. Nicholas in common prayer for the sake of “the desired achievement of full unity amongst Christians.” Such ecumenical overtures also draw heavy criticism from many Orthodox hierarchs, monastics, and laity.
Comments

Foma Dobrov4/27/2017 6:03 pm
I agree with all comments above. Bartholomew is under the influence of something alien. It IS hypocritical to call this "Ecumenical" and kick out the OCA. Nice work. It is important to note that ROC opposes this Council too. Good! This "We are the World" business is rot. I remember Christ saying "I am not of this World"
Thus....Let us keep it clean. "Nothing New. Nothin Novel" THUS!

Gregory4/27/2017 12:20 am
We Orthodox brethren do live now and have lived since apostolic times in unity of faith and the One Body of Christ (the Orthodox Church) is catholic (whole,complete, universal). I am unable to understand therefore, what exactly his holiness believes the Body of Christ lacks?? Other christian societies are certainly welcome to embrace the true faith and accept the One Baptism.

Athanasius the American4/26/2017 10:13 pm
So we must cease being Orthodox to embrace this fantasy? Fascinating that the USA is not recognized by a man held as prisoner by the Turks in an Islamic city. Greece returns to paganism while Russia grows the Church exponentially. Rome has always been welcomed back to the table, and dividing and alienating Orthodoxy is not the way to get them back.