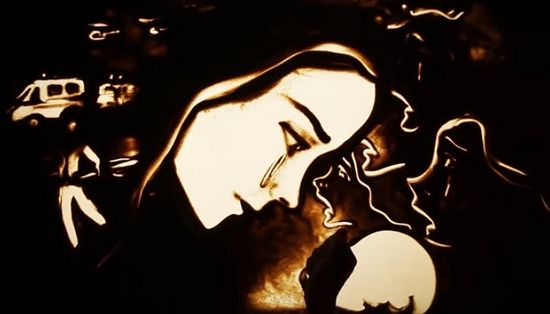 A new sand animation has been released on the website of artist Ksenia Simonova in memory of the victims of the 1986 Chernobyl disaster. The short story concerns a family and a mother and a daughter, and is meant to remind us of the thousands of people affected by the explosion.

Other sand animations from Simonova are dedicated to St. Ksenia of St. Petersburg, St. Luke of Simferopol, and Royal Martyr Nicholas II, among many others.

“My hometown of Evpatoria has always been closely linked with the memory of Chernobyl,” the artist writes. “Children suffering from the Chernobyl accident came to our children’s health center for rehabilitation. We opened the Wormwood Star Museum a few years ago. My generation well knows what I’m talking about; it’s not necessary to explain. I would like our children to know and remember, and grow up with the idea that the world must avoid such terrible catastrophes, to save the planet…”

The title “Wormwood Star” refers to the opening of the seventh seal in Revelation chapter 8, when many men die by drinking water turned bitter: And the third angel sounded, and there fell a great star from heaven, burning as it were a lamp, and it fell upon the third part of the rivers, and upon the fountains of waters; And the name of the star is called Wormwood: and the third part of the waters became wormwood; and many men died of the waters, because they were made bitter (vv. 10-11).

The Chernobyl disaster was a catastrophic nuclear accident which occurred on April 26, 1986 in the No.4 light water graphite moderated reactor at the Chernobyl Nuclear Power Plant. The destruction had an explosive character, the reactor was completely destroyed, and radioactive substances were released into the surrounding environment. The accident is the largest of its kind in the history of nuclear energy. Stories of the great miracles narrated by the rector of St. Elijah’s Church in Chernobyl, Archpriest Nikolay Yakushin

Stories of the great miracles narrated by the rector of St. Elijah’s Church in Chernobyl, Archpriest Nikolay Yakushin
Archpriest Nikolay Yakushin
The first great omen of the Chernobyl disaster, which shook the entire planet in 1986, was revealed at a time of the rapid development of nuclear energy, long before the explosion of the 4th reactor at the Chernobyl nuclear power plant. Witnesses recall it happened exactly ten years before the accident, on April 26, 1976. ‘Babushkas of Chernobyl’ Finds Life Thriving in Scarred Land
The sole inhabitant of the village, she is one of about 100 older people, mostly women, still living in the Chernobyl exclusion zone — 1,000 square miles of Ukraine that were evacuated in 1986 after a catastrophic accident at a nuclear power plant. Divine Liturgy Celebrated in Chernobyl
The accident at the Chernobyl nuclear plant happened on April 26, 1986, due to an explosion in the fourth power-generating unit.
Comments
×