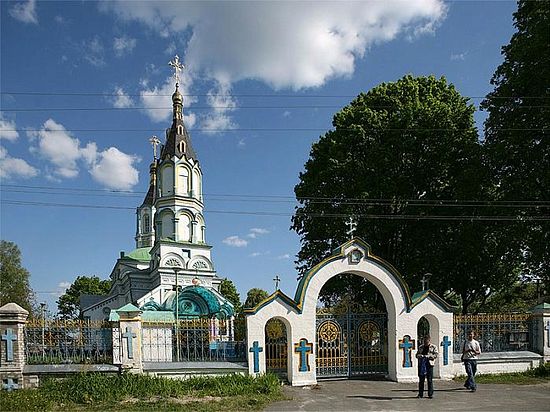 On August 2, 2014 (July 20 O.S), the feast-day of the Holy Prophet Elijah, Metropolitan Paul, Abbot of the Kiev Caves Lavra, was scheduled to celebrate a Divine Liturgy at St. Elijah’s Church in the town of Chernobyl, reports RIA-Novosti.

The only church in Chernobyl dedicated to the Old Testament Prophet Elijah is first mentioned by chronicles in the 16th century. Following the accident at the Chernobyl nuclear power station in April 1986 the church was closed. Services in it were resumed in 2001. The church contains the revered icons of “The Saviour of Chernobyl” and of St. Nicholas the Wonder-Worker.

All pilgrims who desired to be present at the patronal feast were welcomed. The entry into the town was simplified on that day.

In April 2011, on the 25th anniversary of the Chernobyl catastrophe, Patriarch Kirill of Moscow and All Russia visited Chernobyl. The head of the Russian Orthodox Church served a funeral service (panikhida) there for the repose of the accident victims. The Patriarch then noted that the containment and stoppage of the nuclear power station accident “became a great moral feat for thousands of people” and called upon the gathered people not to forget the Chernobyl disaster victims. 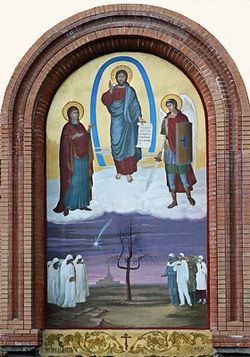 The icon “The Saviour of Chernobyl”
The icon “The Saviour of Chernobyl,” in Prophet Elijah Church, painted (written) after the disaster, has a unique history. According to the web site of the Church of St. Theodosius in Kiev, the icon’s prototype appeared several times in dreams to Yuri Andreev, an atomic energy worker who received an enormous dosage of radiation at the time of the accident. Andreev dismissed the visions as simple dreams, or even heresy, but eventually decided to ask Metropolitan Vladimir of Kiev (now recently-reposed) if it would be possible to have an icon made showing the Saviour, together with the people of Chernobyl who risked or sacrificed their lives to save others from the radiation. Metropolitan Vladimir gave his blessing. The icon depicts The Saviour, the Mother of God, and the Archangel Michael at the top of the icon. At the bottom left are the souls of the victims who died from the accident; on the bottom right are the workers who knowingly stayed in the deadly radiation in order to contain the accident. Between them is a pine tree, shaped like a trident, that stood at Chernobyl. “Workers of the Chernobyl nuclear plant were all non-believers,” said Andreev, as reported by The Voice of Russia, “until they witnessed something which can only be interpreted as the power of God. In the very first seconds after the explosion on the fourth reactor a cloud with uranium particles moved towards the neighboring town of Pripyat,” only 1800 meters (1 mile) away. “A pine stood in the way of the radioactive cloud. Before it reached the tree, the cloud broke into two halves and instead of covering the town, it passed it by a mere several meters from residential areas. No one can explain this to this day.”

During WWII, the pine had been used by fascists to hang Russian soldiers on.

The Icon has been the source of miraculous healings, according to the St. Theodosius Church web-site. During the consecration of the icon, a miracle occurred witnessed by thousands of people: a dove flew over the icon, a rainbow appeared in the sky in the shape of a halo (though there had been no rain), and then an Orthodox Cross appeared in the sky, with the sun in the center of it. Chernobyl teaches us that we are not in command

Chernobyl teaches us that we are not in command
The apocalyptic visions begin just inside the doors of the Ukrainian National Chernobyl Museum and many of them lead into the Book of Revelation. The final pages of Christian scripture are full of angels, trumpets, flames, thunder, lighting, earthquakes and catastrophes that shake heaven and earth.