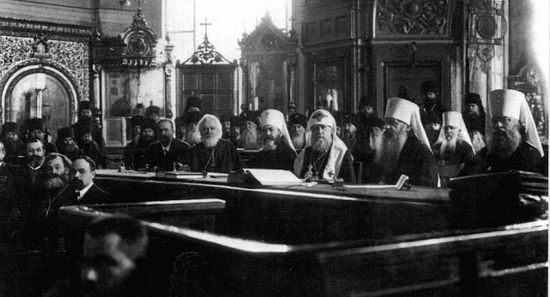 At its May 4 session at Moscow’s Danilov Monastery, the Holy Synod of the Russian Orthodox Church resolved to establish a new feast glorifying the holy fathers of the 1917-1918 Local Russian Church Council, to be celebrated on November 5/18, the day of the election of St. Tikhon to the Muscovite patriarchal throne, reports the press service of the Moscow Patriarchate.

The Synodal liturgical commission is to submit no later than July 15 the text of the troparion, kontakion, and magnification of the Holy Fathers of the Local Council of the Russian Church. A new service is also to be written, but until the time of its completion the service for the New Martyrs and Confessors of the Russian Church, found in the Menaion on January 25, is to be used. For centenary of revolution Church calls to immortalize those who suffered for faith in Soviet years
136,900 Orthodox clergymen suffered repression in 1937, 85,300 of them being executed. In 1938, 28,300 were arrested, and 21,500 executed. “The total number of believers who suffered in the years of persecution is known to God alone,” Met. Hilarion said. According to him, by 1939, only about 100 out of more than 60,000 churches that had been active in 1917 were still open. Only four ruling bishops remained free. Spiritual deterioration of Russian people led to Bolshevik Revolution, faith revived at turn of XX and XXI centuries—Patriarch Kirill
“The main lesson we must glean from the last century is that we cannot build human life and society without God. Such societies, in the words of Holy Scripture, are ‘houses built upon the sand,’” Patriarch Kirill underlined.
Comments