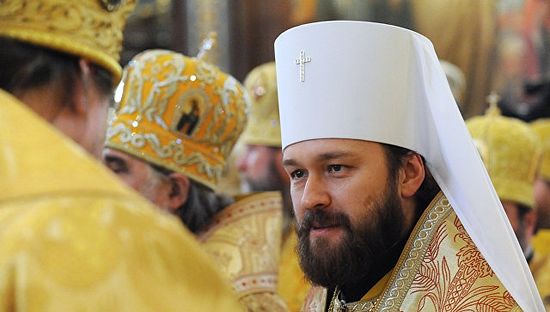 The head of the Moscow Patriarchate’s Department for External Church Relations Metropolitan Hilarion (Alfeyev) stated on Russia-24’s television program “The Church and the World” that he supports the Federation Council’s initiative to restrict shopping on Sundays, reports RIA-Novosti.

Earlier it became known that the Federation Council, the upper house of the Russian parliament, had completed preparations of a bill amending the law “On Trade,” according to which supermarkets would no long be open 24-hours, but would close at 9 PM on weekdays, 4 PM on Saturdays, and would not operate at all on Sundays.

According to the metropolitan, shopping deprives Russians of too much time. “Maybe one of the reasons so many of our families fall apart is that people have absolutely not enough time to just be with one another,” he said.

Moreover, he noted, employees of major retail stores are deprived of having a full weekend, including their time to go to Church. “The question here is about those people who work in these organizations. They do not have the chance to go to church on Sundays, and are deprived of the chance to be with their families on Sundays. And this around-the-clock conveyer, working all week without a break, turns people into robots,” His Eminence declared. Russian children's ombudsman identifies common tasks of Church and state
In Anna Kuznetsova’s view, the common task of the Church and the state is to prevent the dilution of values which contribute to preserving both the individual person and the family alike. Russian Patriarch Calls on Moscow, Athens to Cherish Common Spiritual Affinity
On Wednesday the Russian Orthodox Church's Patriarch Kirill called on Moscow and Athens to preserve the spiritual connection between Russia and Greece. Hold Fast to What You Have
Russia through the Eyes of an Orthodox American
Olga Kirianova, Peter Lukianov
I had goose bumps, and unexpectedly began to cry like a baby. I am standing in church, tears flowing, and I cannot comprehend where I am. It is impossible to relate this in words. Three minutes ago, I was walking along dirty and busy streets of a bustling modern city, and suddenly I am in paradise!
Comments

Phillip I Jospeh Hanna5/13/2017 11:21 pm
Barekmor Your Eminence! A brilliant idea to clamp down on spending culture, allocating more time to family and most importantly restablishing Our Lord's day holy and work free. Our Lord doesn't ask for much, He has given us 6 days for work and only asked 1 day for Him. Christ willing the bill is passed through Parliament.
Bless O, my Lord Bishop!
Your servant in Christ,
Phillip
×