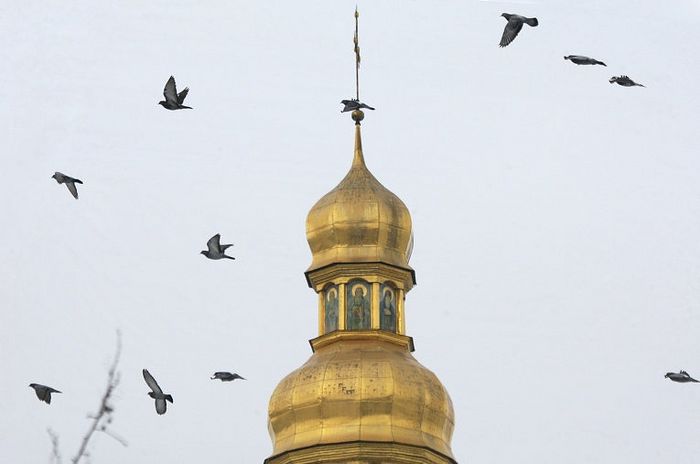 The Verkhovna Rada of Ukraine will consider two draft laws on the status of religious organizations on May 18, one of which would effectively prohibit the Ukrainian Orthodox Church of the Moscow Patriarchate, the second of which would legalize the seizure of churches, reports RIA-Novosti with reference to Strana.ua.

One of the authors of the initiative, Deputy Dimitry Tymchuk, confirmed that the document does indeed deal specifically with the UOC-MP: “Across the whole country their churches remain points of agitation against the Ukrainian state. They sell anti-Ukrainian literature even in the center of the capital at the Kiev Caves Lavra,” he stated.

The main research apparatus of the Verkhnova Rada has criticized the bill and recommended that it reject the bill as violating the constitution and acting laws in the country.

The UOC believes that with this law the schismatic Kiev Patriarchate will begin to take away its parishes by introducing a group of people into a parish who will “self-identify” as members of the parish and vote to change jurisdictions, which has already been attempted many times.

Metropolitan Luke of Zaporizhia sharply criticized the bill and its authors in a letter, calling them the “servants of the devil.” “Using their methods of pressure on the Church, they propose to adopt new legislation aimed at destroying the prayer life of our Mother Church, the established Church-administrative structure for centuries,” he wrote.

In his May 14 homily, Metropolitan Agafangel of Odessa called upon the faithful to strengthen their prayers, that the Verkhovna Rada not accept the “anti-people, ungodly laws, aimed at the destruction of the Ukrainian Orthodox Church on the territory of Ukraine.”

“We always pray for our God-protected country, and for the authorities and we desire that God would enlighten them. Through crisis and catastrophe the Lord calls all to repent and change… Therefore, we need to strengthen our prayer … that the Lord would give us patience and courage, for he is always with us,” Met. Agafangel preached.

In just one day, with the blessing of His Beatitude Met. Agafangel, more than 52,000 faithful of the Odessa region signed an appeal to the Ukrainian parliament to reject the two bills as dangerous to the Church and discriminatory against the faith of Ukrainian believers. mishi5/17/2017 4:19 pm
5 What will happen next? Paul said: “Whenever it is that they are saying: ‘Peace and security!’ then sudden destruction is to be instantly upon them.” The destruction begins with the attack against all false religion in the world. The Bible calls false religion “Babylon the Great,” or “the harlot.” (Revelation 17:5, 6, 15) That attack against all false religion, including Christendom, is the beginning of the “great tribulation.” (Matthew 24:21; 2 Thessalonians 2:8) Many people will be surprised when this happens. Why? Because until that time, the harlot will think that she is “a queen” who will “never see mourning.” She thinks that nothing bad will happen to her. But she will suddenly find out that she has made a mistake. She will be destroyed very quickly, as if “in one day.”—Revelation 18:7, 8.

Mugadizi5/17/2017 1:18 pm
Let the church be alone since you politician are the ones messing up with countries, please fight for justice in the society, peace, corruption, poverty and how to bring back equity and stability in society,don't misuse your parliamentary powers , God will judge you harshly as you persecute his church and people.....

Athenagoras5/16/2017 1:54 am
Russia should strive to maintain the Orthodox faith in all its purity, and counsel the Ukrainians to hold fast to the faith they have received from the Apostles and Christ.
×