Escaping From the Abyss of Sin

A Homily on the Samaritan Woman 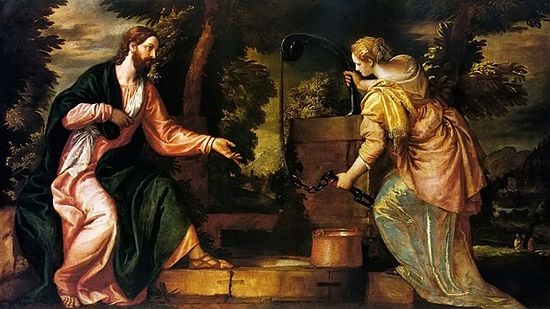 Our Lord Jesus Christ tirelessly taught His disciples and those who heard Him. Therefore, huge crowds of people always walked behind Him, thirsting to hear His holy teachings.

And now He preaches at the well. He grew tired after a long journey and a sweltering day. The Samaritan Woman came to the well for some water. The Lord began a conversation with her about true prayer and about where we ought to pray to God, and gave her instructions for eternal life, convicting her of secret sins.

The Samaritan Woman, hearing this reminder of her intemperate and scampish life with her unlawful husband, was moved thereby to the depths of her conscience and heart—not justifying herself, but from an excess of grateful feelings she exclaimed, Sir, I perceive that thou art a prophet (Jn. 4:19), and led the whole city to meet the Lord.

This remarkable woman then became a Christian, receiving the name Photini (“radiant”) in Baptism, later completely justifying the meaning of her name. She preached the name of Christ not just in her homeland, but in other countries—in Africa and in Italy. Together with her younger son she turned many people to Christ. Her older son Viktor served in the army under Nero and was made a commander in Italy, so as to exterminate Christianity there, but instead, as a soldier of Christ, he was the protector of Christians, and like his mother a zealous preacher of the Gospel. When the Roman tyrant learned of it, he ordered the Christians to present themselves to him. At that time, Photini along with her five sisters and her son willingly appeared before the tyrant, and to his question, “Why have you come to us?” they answered, “To teach you to revere Christ.” Then the torturer ordered to crush the hands of the saints on an anvil. However, it crushed neither their faith nor their bodies. It was then ordered to cut off their hands, but the sword was ineffective. The martyrs were imprisoned in a dungeon, but even there they continued to preach Christ, and the place of criminals was turned into a church of God—for which they were subjected to new torments, which eventually ended their suffering lives. St. Photini’s (the Samaritan Woman’s) skin was flayed off, and her body was cast into a well by command of the tyrant. Thus, she who at the well left the path of sin and received from the Life-giver living water and grace, leaving her temporal life behind at the well, passed into another, better, blessed, and eternal life.

Such was the Samaritan Woman mentioned in the Gospel. So bravely did she undergo suffering for faith in Christ! Her life is one of the most striking examples of how the grace of God can revive even the most sinful of souls, and raise it up from the chasm of ungodliness to the heights of spiritual glory. Sinful and despised by all, Photini went to the well to secretly draw up some ordinary water, but she drew up “living water, saving water.” This sinner, whom merely to touch was considered defiling by the zealots of the Law, mercifully accepted the Lord and Savior! What great encouragement, what unshakable support for all of us sinners. The Lord is always, every minute ready to accept everyone who turns to Him with sincerity and depth of contrition.

Therefore, my friends, no matter how corrupt we are, it is worth it to turn to the Lord Jesus in full repentance; but our turning to the Lord and Savior must not consist merely of empty words, or lamenting for a minute, but of a sincere and firm determination to escape from the abyss of sin, without turning back. Do All Paths Lead to Salvation?
Fr. James Guirguis

Do All Paths Lead to Salvation?
The Reading from the Holy Gospel according to St. John 4:5-42
Fr. James Guirguis
I would like to focus on some of the difficult things our Lord Jesus Christ says to the woman at the well. In our society we are being very well trained not to cause any waves with the things that we say. We are taught to be politically correct with all of our speech. We are taught that there are no absolute truths and objective realities only opinions and feelings are relevant. Are We Broken or Transformed?
Fr. James Guirguis

Are We Broken or Transformed?
Fr. James Guirguis
There is no doubt that we each need a life changing encounter with the Lord, and there is no doubt that we are each capable of having this because the Lord in His grace is hungry for this relationship with each of us. He is present, but where is our heart? Do we recognize that we are sick and have been enemies of Christ through our own sinfulness and pride? St. John Chrysostom: On the Samaritan Woman
Homily 33
How then did the Samaritans "know not" what they worshiped? Because they thought that God was local and partial; so at least they served Him, and so they sent to the Persians, and reported that "the God of this place is wroth with us" ( 2 Kings xxvi.), in this respect forming no higher opinion of Him than of their idols.
Comments
×