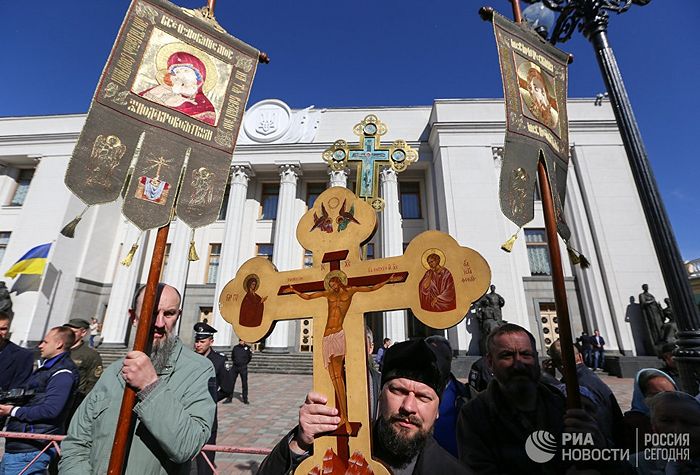 The Ukrainian Verkhovna Rada announced that it will not consider draft bills Nos. 4128 and 4511 on Thursday as originally planned, reports RIA-Novosti. More than 300,000 Ukrainians throughout the country signed petitions against the bills, which threaten to forbid and seize the churches of the Ukrainian Church of the Moscow Patriarchate, as they are centered in a state deemed an “aggressor” by the Ukrainian government, as previously reported. Around 10,000 gathered outside the Verkhovna Rada to prayerfully protest the bills today as well, according to the Information Department of the Ukrainian Orthodox Church.

Meanwhile, around 10,000 faithful from around the country, including representatives of many parishes and monasteries, gathered at the walls of the Verkhnova Rada at 8 in the morning to offer prayers to God, entreating His protection against the unjust laws that threaten the religious life of the majority of the nation’s citizens. Prayers were led by Metropolitan Vladimir of Pochaev, Archbishop Joasaph of Kirovograd and Novomirgorod, Bishop Jonah of Obukhov, Bishop Clement of Irpin, Bishop Barsanuphius of Berdiansk, and Bishop Cassian of Ivankiv.

“We are defending the rights of believers, opposing the law by which deputies will destroy the rights and freedoms of our Orthodox Christians, and defending our Holy Orthodox Catholic Apostolic Church of Christ. You know, the deputies are trampling not only Christ, but their ancestors, grandfathers, fathers, and great-grandfathers. We are for Christ, and defending their rights,” said Ekaterina from Chernogorsk, who was present at the rally.

On Wednesday, His Holiness Patriarch Kirill addressed heads of state in Russia, Ukraine, France, and Germany, the primates of the Local Orthodox Churches, Pope Francis, the UN Secretary General, and the Secretary General of the World Council of Churches in connection with the troubling bills that appeared on the Rada’s docket.

In his epistles it is noted that in the case of the adoption of these laws, discrimination unheard of in contemporary Europe would be legalized. Such a restrictive religious legislation was not in effect in Ukraine even during the Communist regime, and throughout the rest of Europe no such legislation has existed except during the time of Nazi rule in Germany, His Holiness notes.

In response to the patriarch’s call, the Reverend Dr. Olav Tveit, General Secretary of the World Council of Churches sent a letter to President Petro Poroshenko and to the Ukrainian Verkhovna Rada, expressing the deep concern of the World Council of Churches at the prospect of adopting bills Nos. 4128 and 4511. “We … believe that these two bills are inconsistent with Ukrainian efforts to develop democracy. We urge that these bills, fraught with negative consequences, be withdrawn,” he writes.

His Beatitude Metropolitan Onuphry, primate of the canonical Orthodox Church in Ukraine, also appealed to the deputies of the Verkhnova Rada, reminding them that, “The Ukrainian Orthodox Church has always advocated for peace in our Ukrainian state, and between all people. The preaching of the clergy of the Ukrainian Orthodox Church is a continuous call to Christian love, to the commandments of God, and for understanding and respect.” Citing the hundreds of thousands of Ukrainians who voiced their strong objection to the bills in petitions and prayer vigils, the primate strongly urged the deputies to reject the draft laws, which he terms, “anti-Church, anti-state, and anti-people.”

Meanwhile, on May 16, in a meeting with a Ukrainian delegation, headed by Prime Minister Vladimir Groisman, His Beatitude Patriarch Theophilos III of Jerusalem assured them of his continued prayers for peace in Ukraine, while emphasizing that ecclesiastical matters ought to be settled ecclesiastically, and not by political interference.

While the UOC-MP has repeatedly reported the harassment of its clergy and the seizure of its churches by representatives of the schismatic “Kiev Patriarchate, it has lost 40 temples to attack and seizure.