At the Ascension Orsha Convent. Miracles of Renewal 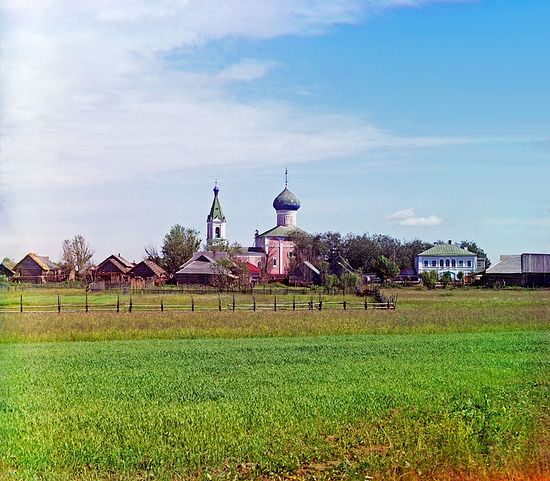 I believe that all who have ever visited Russian monasteries and convents have heard this story many times: how a monastic community flourished before the Revolution and then was closed by the Bolsheviks; how the monks or nuns were exiled; how the long-awaited restoration began in the 1990s; the abomination of desolation on the site of what once was “the Garden of Eden”; the first services in an unheated church building where in winter people saw “steam” coming out of their mouths (and that time is considered the happiest!); how once the community had no money to pay the builder but after praying before the monastery’s (or the convent’s) main shrine someone donated them the sum of money that they needed… All these stories repeat themselves only with slight variations, becoming history with a capital H before our very eyes; while we, pilgrims, are becoming the narrators of these stories.

Under the protection of St. Sabbatius

The Ascension Orsha Convent is one of the oldest monastic communities in the Tver region. It was founded as a monastery for men at the turn of the thirteenth century. It was famous for the strict ascetic life of its monks. Among its founders was St. Sabbatius (Savvaty) of Orsha. Abbess Eupraxia (Inber), Mother-Superior of the Ascension Orsha Convent, speaks about him: 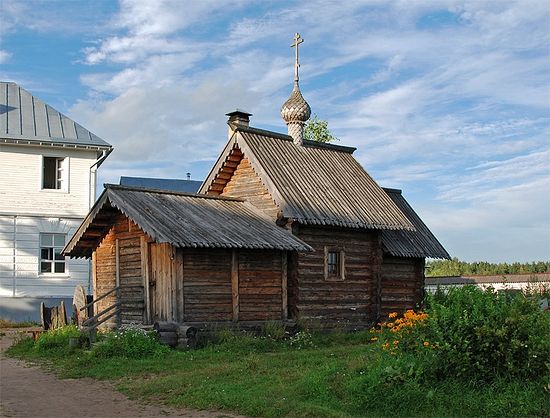 —St. Sabbatius was a contemporary or probably a disciple of St. Sergius of Radonezh. Seeking the solitary life, the saint made himself a dug-out hermitage six versts [a Russian measure of length, about 1.1 kilometers or 0.66 mile] away from the monastery and lived there. Now the village of Savvatyevo is located there. He used to visit the brethren, give them spiritual guidance and then return to the forest. This site was not desecrated in the period of persecutions. Metropolitan Juvenaly of Krutitsa and Kolomna erected a cross there and prayer service are regularly performed. Our convent has a small wooden Church of St. Sabbatius, so we are protected by his prayers to this day.

The importance of the monastery in days of old is confirmed by the fact that Archimandrite Joseph of Orsha Monastery was invited as a delegate from Tver to the Land Assembly (“Zemsky Sobor”) in 1613, when Michael Fyodorovich was elected to be the first Russian tsar of the Romanov Dynasty. In the first half of the sixteenth century the magnificent Ascension Cathedral was built at the monastery. In the seventeenth century, during the Polish-Lithuanian invasions, the monastery was more than once ravaged, almost all monks were killed, and the church was desecrated. In 1649 the monastery was attached to the Tver Hierarchal Residence. By the beginning of the twentieth century it had only seven monks. In February 1903 it was reorganized as a convent. The first abbess, Mother Eudoxia, came with eight sisters from the Resurrection Convent in Torzhok [also in the Tver region]. Ten years later the number of the nuns rose to 140, the church and the abbess’ residence were restored, and cells were built. The sisters painted icons, and used a special rite to pray for all people. Peasant children were taught at the convent’s school. A hospital ward for outpatients was opened, and during the First World War they opened an orphanage for children of fallen soldiers.

Terrible trials befell the convent after the Revolution. Sister Elizabeth (Zheltukhina), assistant to the abbess of the Ascension Orsha Convent, relates:

—In 1919 the convent was closed. Mother Vitalia, the last abbess, moved with the sisters to Tver to live at the dependency of the Ascension Unified Faith Old Ritualists Church [a movement of Old Ritualists who recognized the hierarchy of the Russian Orthodox Church]. Archbishop Thaddeus of Tver (secular name: Ivan Vasilyevich Uspensky, 1872-1937, commemorated December 18/31—A.N.) then served there. Unfortunately, no information about the death of the abbess and the sisters is known to date. In all probability they were exiled to Kazakhstan. We hope that the Lord will reveal us their fates as He revealed the location of the last abbess’ grave to us.

How the resting place of Abbess Eudoxia was discovered 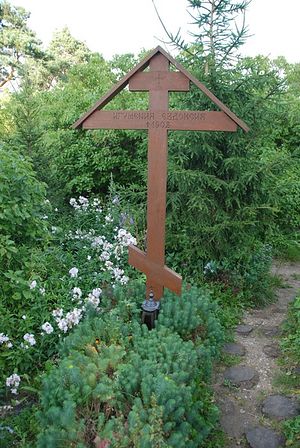 The cross on the grave of Abbess Eudoxia (+1908). Photo by Elena Filippova.
The servant of God Seraphima Mikhailovna came here when the convent’s restoration was beginning. One day as she was passing by that site she made a sign with her hand: “Your abbess lies there, and you are not even aware of this!” I said: “Seraphima Mikhailovna, please, show it.” She answered: “Not for anything! The grass stands tall with dew on it and I will get my feet wet. I won’t show it.” But a year later the abbess persuaded her. She showed us the grave and related how she had memorized its location: “I was born in Orsha in 1912. When bells called worshippers for a service, we first went to the cemetery and only then to the church. We used to come and pray here. Flowers grew here and an icon-lamp burned.” When the sisters resolved to make a mound on this place they discovered the remains of an iron cross with embellishments—it was just like what Seraphima had described. And four years ago we obtained a documentary confirmation: photographs from the U. S. Library of Congress’ archive by the Russian photographer Prokudin-Gorsky, taken in 1910-1913. On one of them a cathedral and a large embellished cross exactly at this place can be seen. So the mother abbess rests here. The sisters pray; they ask for her intercession and feel her help.

Monastic life at the convent was resumed in 1992. Abbess Eupraxia of Orsha Convent of the Ascension relates:

—And what did you see here when you arrived?

—This beautiful church. Providentially, in the Soviet era they decided not to build a road here so the church remained unscathed. Today we already have a road, so next time nothing will probably remain of the church. (Smiles). There was no road, so the church was not completely destroyed. But all was in utter desolation. Birds flew through it, the building was still in scaffolding (the locals had sawn its base and used it as firewood) and it was unclear how the remaining part still hung and did not fall on people’s heads. Everything around was broken and ruined. The abbess’ dwelling stood without windows and doors! At that time our life was difficult, but filled with joy.

—Did God perform any miracles for your consolation?

—Everybody is interested in miracles, while miracles are occurring everywhere at any time! (Smiles). On June 28, 2000, it hailed on the convent’s territory and the hailstones resembled human eyes. 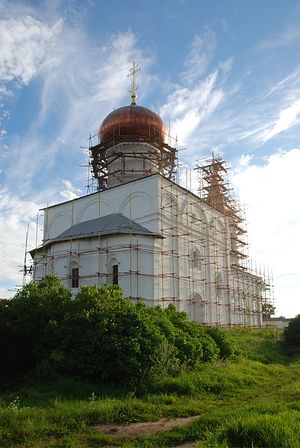 The Ascension Cathedral. Photo by Elena Filippova.
I remember that a car arrived at the convent on June 28. A nice man got out of it and gave us many presents, including a box with books from the Sretensky Monastery’s bookshop. As soon as we started talking with him, it started raining, and then hailing. First hailstones were pea-size, then bean-size, and finally, about the size of almonds. When all calmed down, Sister Elizabeth, the abbess’ assistant, brought me hailstones resembling human eyes in the palms of her hands, with a “pupil” and an “iris” in the middle of each of them. Every hailstone and every “pupil” were transparent, and every “iris” was like a bulged ringlet, where, as if it were a “frost pattern on the glass”; all that can be found on a human iris was “painted”.

All of us saw that miraculous hail. And, as usual, it was only much later that we understood that it had been an extraordinary phenomenon. We went to Tver with that man (who brought us gifts), named Gennady, who became our benefactor. At the same time Sister Elizabeth opened the box with the books that he had given us and took the smallest one out of it. The book was entitled Miracles of God in the Russian Land. When I came back in the following morning, she showed me the page on which she had first opened it—it was a reprint of the cell notes of Archimandrite Anthony (Medvedev) of the Holy Trinity-St. Sergius Lavra, who was canonized (feast: July 6/19). It was perhaps the culmination of the whole story. The following was written on that page under the date, “August 11, 1865”: “I was sitting in my cell and writing my notes, when it suddenly started raining and then it turned into a hailstorm. We had never experienced such a storm at our Lavra. The first walnut-size hailstones hit our windows. The hospital overseer managed to bring me an unmelted hailstone on the palm of his hand. It was a triangular fragment, slightly more than half a vershok [an old Russian measure of length, equal to c. 1.75 inches or 4.4 centimeters] in size, with an ‘eye’ in the center which was so distinctly seen that it could not have been ‘painted’ more perfectly… As the hailstone lay on the palm of the hand, it soon melted.”

This is what our miraculous story was like. Through this sign the Lord marked the moment when something seriously changed in the inner life of our convent. We started restoring the church. New sisters came and joined the community. At last the convent was born.

After that hail with the help of God we succeeded in restoring the central part of the sixteenth-century Ascension Cathedral. The restoration work commenced very late—only on August 3. People usually take down scaffolding at that time, but we then only put it up. And the Lord blessed us with a prolonged late autumn which lasted until mid-November! It was a true miracle performed by God before our very eyes. 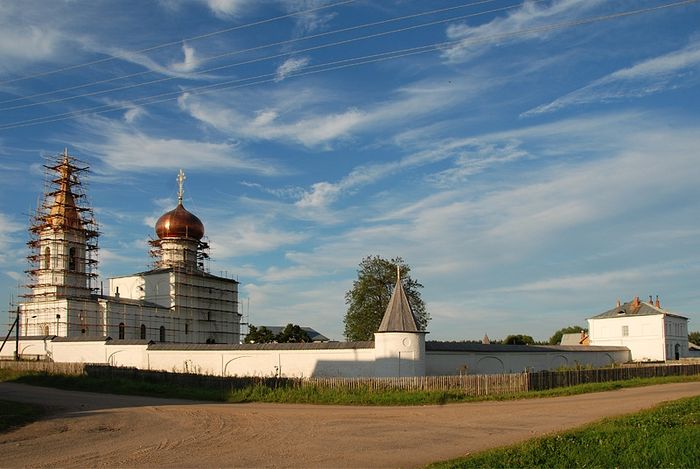 The Ascension Orsha Convent in the Tver region. On the left: the Ascension Cathedral, on the right—the abbess’ residence. 2008. Photo by Elena Filippova.

And in the spring of 2001, on Radonitsa, we decided to celebrate the first service at the cathedral after decades of desolation. In that year, Radonitsa coincided with the 445th anniversary of the repose of Holy Hierarch Barsanuphius, who as a bishop of Tver had consecrated our church. After the service the nuns noticed that the frescoes (which earlier had been faded and dull) started renewing. The first of them was a fresco depicting St. Jonah, Metropolitan of Moscow, who is commemorated by the Church on June 15/28—the day when the miraculous hail had fallen.

Of course, it is repentance that really matters, not miracles. But, nevertheless, there are minutes of sorrow in the life of every single person—then miracles do comfort and strengthen us. Though, beyond all doubt, inner spiritual life is the most important thing. Glory to God for all things. For this and for that—for everything. Mologa. A Story
Nun Evfimia (Aksamentova)
In my youth, when, as things turned out, I was leaving my parents’ house forever, I had a dream that for some reason became fixed in my memory.There was absolutely nothing special in it and it is strange that I memorized it. Antique Wooden Church in Russian Kondopoga
The Karelia region is one of the rare places in Russia where such churches still exist. There is also a well-known Kizhi park where in Soviet times ancient wooden Russian buildings were collected from other parts of the Russian north into one place. A Sunday Walk Through Murom: The Town of Saints Peter and Fevronia
Johanna Hansson
The ancient Russian town of Murom, founded in 862, can undoubtedly be ranked among the pearls of the Vladimir region. It is the home-town of the brave knight Ilya Muromets, the hero of Russian medieval folk poems, and of saints Peter and Fevronia, the holy noble couple who are revered as patron saints of marriage and family.
Comments
×