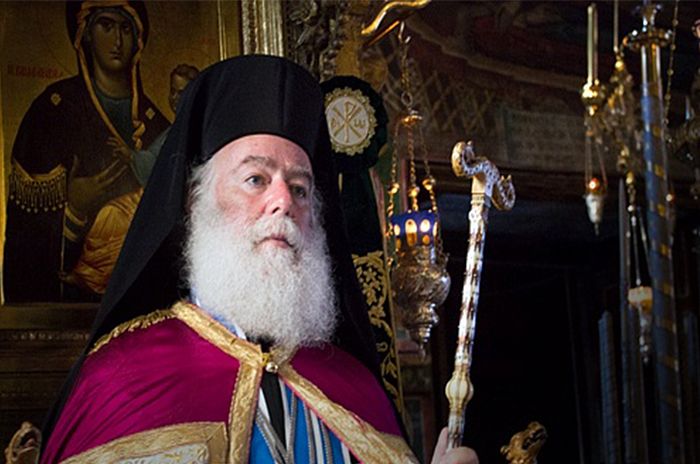 A number of hierarchs throughout the world have expressed their opposition to the two bills recently proposed in Ukraine, that would significantly hinder, if not forbid, the activity of the canonical Ukrainian Orthodox Church of the Moscow Patriarchate. Among the vocal hierarchs have been several primates of Local Churches, as well as local hierarchs.

“We condemn any move that would affect the sovereignty of the Ukrainian people, and we also strongly condemn any step which affects the independence, reliability, integrity, and freedom of the canonical Ukrainian Orthodox Church,” His Beatitude writes.

The proposed laws are “aimed at increasing tensions and changing the identity of Ukrainian society,” the patriarch believes.

Joining his brother bishop, Patriarch Theodoros II of Alexandria and All Africa has also voiced his support for the Ukrainian faithful and his opposition to the proposed parliamentarian bills in a May 23 letter to Pat. Kirill.

“The state cannot adopt laws about the Church on its own without the participation of the Church itself, especially in a country that claims to respect European values,” the African primate writes. In his opinion, Ukrainian leadership needs to “take a neutral position and not be controlled by irresponsible nationalist circles.”

On behalf of the entire Church in Africa, Pat. Theodoros voices his support for the canonical Ukrainian Church “in the struggle for the preservation of the inviolable privileges of the Orthodox communities of Ukraine,” condemning any such legislative decisions by the Ukrainian parliament as “invalid.”

In a letter to the chairman of the Ukrainian Verkhovna Rada, Metropolitan Rostislav of the Czech Lands and Slovakia writes that adopting such laws would undermine the foundations of religious freedom and equality of churches and religious organizations in Ukraine, and would raise tensions and cause instability in Ukrainian Society, reports the UOC’s Information Department.

“The Ukrainian Orthodox Church is the sole canonical Orthodox Church on the territory of Ukraine. Our Local Churches are not connected by territorial boundaries, but they are deeply connected by close historical relations,” the primate writes. “We perceive very close to the heart what is happening with our brothers in Ukraine today, and are worried about the future of holy Orthodoxy and the canonical Church. We are deeply concerned about the intention of the Verkhovna Rada of Ukraine,” he continued, expressing the deep love that exists between the Local Orthodox Churches.

“Your Excellency,” Met. Rostislav writes, “praying to the Lord, we demand the withdrawal of these bills.”

Several other hierarchs, including Metropolitan Pavel of the Belarusian Orthodox Church, and a number of hierarchs in the Ukrainian and Moscow Churches have also spoken out against the dangerous bills. George5/28/2017 6:53 am
Supposedly this is a religious site and not the venue for haters to insult, berate and curse other people. Correct?
If so, read the comment by NP. It includes all of the above and contains swearing to top it all off.
All of this is written in poor English resembles the propaganda post for non-Russian readers. You really should know better.

Nicholas N.Petrochko5/25/2017 6:46 am
The 2 draft bills in the Rada are pushed by the Uniate nationalists and Kievan Patriarchate. They would like to expropriate all church property of the majority faith of the Ukraine, the U O C(MP). If such discriminatory action occurs then blood will flow in this failed state. It is Nazi legislation, do not the ykrops see this? This would be the straw that sets this state into a death spiral (not the high utilities,failed economy,no jobs,little food > shit life).

Anthony5/24/2017 8:20 pm
I'm really surprised that His All Holiness, the Phanar has not added his voice to the outcry. Do we know why? Is he ill? Is he away on business at the Vatican perhaps? Questions, questions. Inquiring minds need to know. As soon as Komrades from Pravoslavie have more info, please update.
×