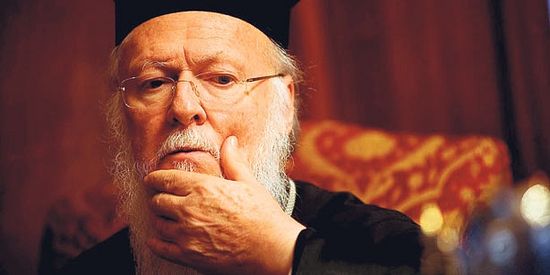 During his visit to the Ecumenical Patriarchate in Constantinople in September 2016, Heinrich Bedford-Strom, Chairman of the Council of German Evangelical Churches, told His All-Holiness that “it would be a special honor” if the patriarch would attend the celebrations for the 500th anniversary of the Protestant Reformation in Wittenberg and Tübingen this month.

Having accepted the invitation, Patriarch Bartholomew will head to Germany next week, reports Sedmitza.

The patriarch will arrive in Stuttgart on Sunday, May 28, and will be awarded an honorary doctorate from the Evangelical Theology and History Department in Tübingen the next day. He will also be presented with the German translation of his book Encountering the Mystery. Then the patriarch will attend a two-day symposium on Evangelical and Orthodox theology.

According to the organizers of the Reformation celebrations, the invitation to Patriarch Bartholomew is intended to remind about the first contacts between representatives of Orthodoxy and adherents of the Reformation, which took place in 1573 between Martin Crusius and Jakob Andreae and Ecumenical Patriarch Jeremias II.

The Patriarchate of Constantinople entered into a bilateral theological dialogue with the Evangelical Church of Germany in 1969. The Breaking of Images

The Breaking of Images
From the perspective of visual art and culture, the Reformation was one of the greatest catastrophes that ever befell Europe. Obviously, there were also cultural gains, in the form of mass literacy, and new forms of visual media, including pamphlets and cartoons. But in terms of paintings, murals, sculpture, architecture, and stained glass, the losses were irreparable.
Comments

Isidora5/30/2017 1:12 pm
"...intended to remind about the first contacts between representatives of Orthodoxy and adherents of the Reformation..."

And those contacts came to nothing because the protestants rejected the Orthodox for the same reasons they reject us today. Protestants believe that Christ's Church had been thoroughly subverted by the devil by the year 300 AD and was only resurrected by them in their reformation. Something about burning crosses and tossing them in rivers, and killing monks and nuns, and letting every guy with with a coffee pot start his own "church" just feels right to them.

Their theology is a mess so, naturally, Bartholomew is fine and supportive of everything that undermines the true faith and leads people into total confusion.

Wittenberg: German archaeologists have discovered the lavatory on which Martin Luther wrote the 95 theses that started the Protestant Reformation.

Luther frequently alluded to the fact that he suffered from chronic constipation and spent much of his time in contemplation on the lavatory.

Experts say they have been certain for years that the 16th-century religious leader wrote the groundbreaking theses while on das Klo, as the Germans call it.

But they did not know where the object was, until they discovered the stone construction after recently stumbling across the remains of an annex of his house in Wittenberg, south-west of Berlin, during plans to plant a garden.

"This is a great find," said Stefan Rhein, the director of the Luther Memorial Foundation.

"This is where the birth of the Reformation took place."

Michael5/29/2017 7:35 am
BTW, D.T., it was Lutheran Swedes who martyred numerous monks and laymen during the 16th century at the Holy Monastery of Valaam in Northern Russia.

As far as my initial post, I never mentioned protestantism directly; only the actions of the heresiarch Bartholomew. And he seems to have made this visit on the Sunday when Holy Orthodoxy commemorates the Fathers of the First Ecumenical Council.

Holy Father Nicholas, pray to God for us.

Here we have an Orthodox Patriarch with a doctorate in Evangelical Theology and History.

Saint Nicholas did slap Arius in the face then; now he will simply let that a laugh bury Bartholomew.

Anthony5/28/2017 1:22 pm
@Brother T.D. - Greetings of the day! Rejoice my beloved! And many, many thanks for taking the time to express your concerns about the alleged ''hatred'' expressed by some of us fundamentalist Orthodox against your former faith. Of course Brother T.D., if we're honest with ourselves, then we must note the fact that Protestantism is no less barbaric or bloodthirsty or greedy or arrogant than the Latin pseudo-Church. We only need to take a look at the nations that adhere to some form of Protestantism or another - Amerika, poodle pseudo ''Great'' Britain or Holland. All of these barbaric imperialist Protestant nations have wrought nothing misery, grief and destruction to many nations across the globe, including my own. Back in the day, when britain was anything significant, it was to bring civilisation to our countries. Now it is for ''freedom'' and ''democracy'' that they destroy us. So whether you like to admit it or not, Protestantism, and its adherents are as false, hypocritical and quite frankly barbaric as the Latins.

And I say once again raise your hands up high and Rejoice! Brother T.D. (now that you're Orthodox).

Alan5/28/2017 5:47 am
Why would any Orthodox celebrate Luther and the Reformation?
The answer, of course, is ecumenism which makes heresy palatable and acceptable. In reality, ecumenism is the work of the devil and must be fought and rejected vehemently.
Do not fall for this evil.

T.D.5/26/2017 9:50 pm
Why all the hatred for protestantism? I am a former Protestant myself. You know the Catholic evil of the Teutonic Order and the Ustasa was real; why do you not believe the horror of the Inquisition in the West committed against Protestants?
I know that protestantism is false, but it is better than the Catholic barbarities.