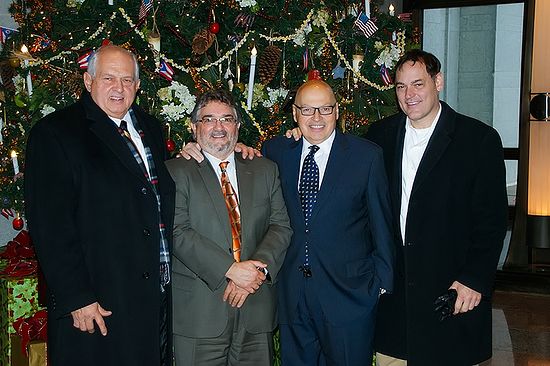 On December 9, 2014, H. Steven Poulos, Aristotle Hutras, Angelo Coutris and former Ohio Congressman Zack Space gather together at the Ohio Capitol–the day of the final passage. Not included in the photograph, but in attendance that day at the Capitol, was Dr. Manuel Tzagournis.

Ohio became the 43rd state to express its support for religious freedom for Orthodox Christianity’s Ecumenical Patriarchate on December 9th when the Ohio House of Representatives adopted Senate Concurrent Resolution 21 in a unanimous 85-0 vote. The Ohio Senate had earlier adopted the resolution in May. SCR 21 is the 53rd such resolution to be adopted in support of the Ecumenical Patriarchate in these states.

The resolution condemned the past and ongoing discriminatory actions of the Turkish government in suppressing the religious freedom of the Ecumenical Patriarchate and practicing Orthodox Christians in that country. The resolution particularly highlighted the government’s refusal to reopen the Halki Theological Seminary, which it closed down in 1971.

The resolution garnered over 30 co-sponsors and was ably and passionately guided through the legislative process by Senators Schiavoni, Hughs, Gentile and Oelslager, Speaker of the House Batchelder, and Representatives Schuring, Letson, Slesnick, Dovella, Clyde, Stinziano and Gerberry.

The State Religious Freedom Resolutions Project is an initiative of the Archons of the Order of St. Andrew the Apostle under the leadership of Archon Stephen Georgeson. Turkey to offer course on Christianity at schools

Turkey to offer course on Christianity at schools
Religious freedom expert Mine Yildirim told World Watch Monitor there were concerns that the course will not take place in reality.