The Historical Role of Personalities

A Homily on the Feast of Blessed Xenia of St. Petersburg 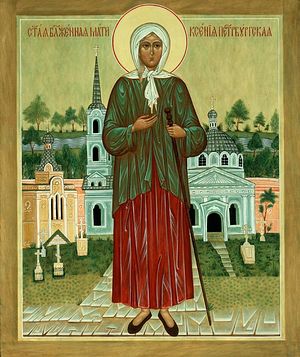 St. Xenia of St. Petersburg
In the name of the Father and of the Son and of the Holy Spirit.

There’s probably no history textbook that talks about Blessed Xenia of St. Petersburg, whose memory we are celebrating today. But on the other hand, every history textbook will necessarily talk about Napoleon and his acts. These two lived at about the same time, at the turn of the eighteenth-nineteenth centuries. But are their contributions to history really so incommensurate?

Napoleon’s acts are well known: hundreds of thousands killed (some of them were buried here, in Sretensky Monastery); churches robbed and ruined, and not just in Russia, but also, for example, in Venice, and indeed, throughout all of Europe; the lives of many destroyed. The spiritual influence of Napoleon was huge in his time, to which the works of Tolstoy and Dostoyevsky in particular bear witness. Raskolnikov, tormented by doubts, asked, “whether I am a trembling creature or whether I have the right…”1 and hacked an old woman-moneylender with an axe, with, we can say, the name of Napoleon on his lips…

The life of Blessed Xenia is also well known to us: At twenty-six years of age, quite a young woman, she suddenly became a widow and took upon herself the asceticism of foolishness-for-Christ, abandoning her home, wandering in her unchanging red coat and green skirt or green coat and red skirt, exposing herself to constant ridicule and insults, and abiding in unceasing prayer. For her many years of ascetic labor, so incomprehensible to the world, Blessed Xenia received from God the grace to quickly and effectively help people—her part in the destiny of thousands was manifested brightly and triumphantly.

Her special gift was arranging family life for many people. Thus, once, coming to the Golubev family, she explained to the seventeen-year-old girl, “You’re making coffee here, and your husband is burying his wife in Okhta. Hurry there!” The confused girl didn’t know how to answer such strange words, but Blessed Xenia literally forced her with a stick to go to the Okhta Cemetery in St. Petersburg. There burying his young wife who had died in childbirth was one doctor, inconsolably weeping, and finally deprived of all sensation. The Golubevs tried as they could to comfort him. This is how their acquaintance began. After a little while it continued, and a year later the doctor proposed to the Golubev daughter, and their marriage was extremely happy. Such cases of Blessed Xenia’s help in arranging families are innumerable—she truly became a creator of human destiny. 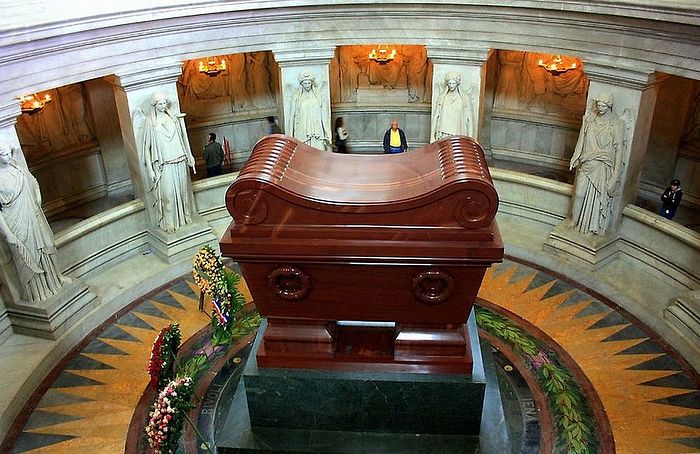 Napoleon is buried in the center of Paris, at the Hôtel des Invalides, and tourists eagerly go to there to look at his sarcophagus made of red porphyry, mounted on a green granite pedestal. No one goes there to pray or ask him for something; for modern man, Napoleon is just a museum piece—a relic of the past. Today his influence is negligible—at best, hackneyed material for movies or pseudo-historical exercises for a novice pulp-writer.

But the grave of Blessed Xenia has been a fountain of healing, of effective help in difficult circumstances, and of the resolution of irresolvable problems for more than 200 years now. Blessed Xenia appeared to one man suffering from alcoholism, and sternly said, “Quit drinking! The tears of your mother and your wife have flooded my grave.” Do I even need to say that this man never touched a bottle again? 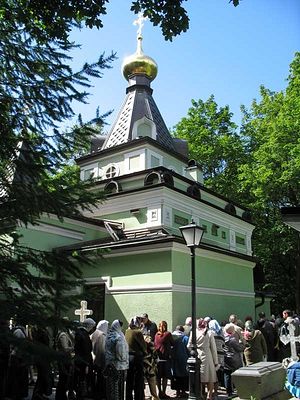 Blessed Xenia’s chapel
Every day, thousands gather at Blessed Xenia’s grave to ask her for help, leaving notes with a cry for help, and these notes like garlands always adorn the saint’s chapel. Hundreds, thousands, millions of notes call upon her name—and was there ever one such note at the red-porphyry-on-a-green-pedestal tomb of Napoleon?

We don’t need to think that history is dispensed by the powerful of this world, in the political sphere; history is certainly not that which we see on TV. True history takes place in the human heart, and if the person purifies himself with prayer, repentance, humility, and patience in suffering, then his participation in his own destiny, and in that of those around him—and in all of human history—will increase immeasurably.

Blessed Xenia did not run the government, did not gather thousands of armies, and did not lead them on aggressive campaigns; she simply prayed, fasted, humbled her soul, and endured all offenses—but her influence on human history is incomparably greater than that of any Napoleon, although history textbooks don’t talk about it…

However, Christ speaks to us about it in the Gospel: For what is a man profited, if he shall gain the whole world, and lose his own soul? (Mt. 16:26, Mk. 8:36, Lk. 9:25). These words gain further credibility with the examples of Napoleon and Blessed Xenia.

History is determined neither in the Kremlin, nor in the White House, nor in Brussels, nor in Strasbourg, but here and now—in our hearts, if they are open to God and man. Amen. We’ve Come to Matushka… Remembering Blessed Xenia
Alexei Maximov
It is amazing! These people don’t have the mark of “religiosity” that we are accustomed to seeing—that customary piety, studied prayerfulness. People are not dressed too piously, but in their eyes and on their lips is a prayer that’s not taken from a prayer book—it is a prayer that breaks forth from the heart. Should I start a conversation with them? But they didn’t come here for discussion.

Anthony 12/2/2017 1:13 pm
Whilst we're on the subject of historical figures, is it not time for the Russkies to get rid of that ghastly mummy in Red Square?
×