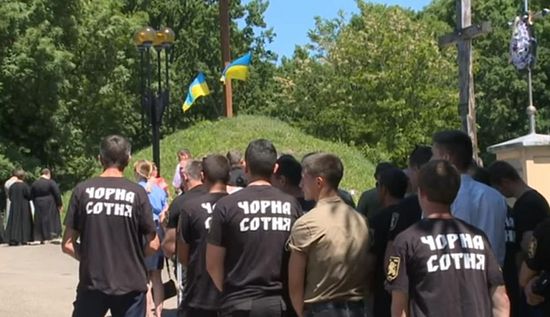 On June 4, 2017, the feast of Pentecost, Uniate priests with the support of soldiers of “the Black Hundred” group made a raider siege of a church of the Ukrainian Orthodox Church of the Moscow Patriarchate (UOC-MP) at Kolomiya in the Transkarpatya region, reports the Information and Education Department of UOC-MP.

According to the head priest of the Church of Annunciation Archpriest Vasily Kobelsky, the Uniates fraudulently entered the church and celebrated their liturgy there.

“On that day activists and priests of the Ukrainian Greek Catholic (also called Uniate) Church organized a traditional procession to the grave of the streltsy [Russian military corps in the sixteenth to seventeenth centuries] of Sech, not far from our church. A representative of the Ukrainian Security Service approached me and asked me to allow them to come into the church to pray. We gave them permission. But the Uniate priests—and there were thirteen of them—immediately proceeded to the sanctuary to serve their liturgy. We did not expect that…” he related.

According to these activists, their primary aim was to persuade the religious community to voluntarily leave the jurisdiction of the Moscow Patriarchate and to transfer their church (which had been lawfully handed over to the UOC-MP by the state) to the Uniate Church. Having enlisted the support of “the Black Hundred” soldiers, they moved from propaganda to action—verbally insulting not only the clergy of the UOC-MP, but also the women who were present there.

The parishioners were indignant at the Uniate clergymen’s irreverent acts and impertinent suggestions.

“Why are you, priests, sowing discord among people? You are setting people at odds with each other,” a parishioner addressed one of the instigators.

Other women, commenting on the situation for the press, noted in astonishment: “We think it is wrong to act like this. Couldn’t they have chosen another day? Today is a great feast of the Church and they have caused a scandal here. And they call themselves Orthodox Christians?” Barging into a church with the aim of taking it over on the great feast of Pentecost is an outrage that defies explanation.

On May 23, deputies at the city council’s session nearly decided to take over the UOC-MP’s church and to transfer it either to the schismatic “Kyiv Patriarchate” or to the Uniates. Then the head of the city council assured everyone that there would be no forcible seizure of the church and the opinion of the parishioners of the UOC-MP’s religious community would be taken into account.

At the moment the situation with this church remains tense. Representatives of the Uniate church are still stirring up hatred and dissension on the territory of the church while the priests and believers of the UOC-MP are praying inside. According to the information from the scene of the incident, the faithful have been inside the church without water for several hours, and are hesitant to leave the church unguarded out of fear that the Uniates will continue their efforts to take over the church. Ukrainian parish rebuilds church after theirs seized by schismatics

Ukrainian parish rebuilds church after theirs seized by schismatics
Rector of the St. Andrew’s Church in the Khodosy village Archpriest Andrei Tizhuk related construction commenced on the new church soon after the forcible seizure of the original church. Russian Church likens attacks on Orthodox Ukrainians to Soviet-era persecutions
The Moscow Patriarchate has expressed concern over the seizing of Orthodox churches in Ukraine and criticized its law enforcement authorities for inaction.
Comments

Valiseon6/8/2017 7:25 am
These Roman Catholics are very confident in their errors, and want to impose upon the Orthodox their delusions. However, they have corrupted the Holy Creed with the Filioque!
×