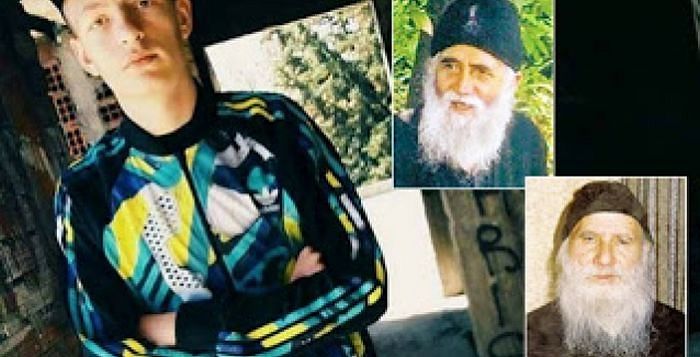 On April 22, Demetrius Nikolopoulos, 16, fell off the roof of an indoor swimming pool in the Greek city of Xanthi and was in coma for eight days. Doctors of the central hospital of the city of Kavala (where the injured youth was immediately taken) assumed that the young man was at the point of death and were pessimistic about his prospects for recovery.

The popular Greek newspaper Espresso contacted Demetrius’ father, Vasilios Nikolopoulos, and Fr. Ioannis Marelis. Fr. Ioannis had blessed the teenager when he was in the intensive care unit and prayed for his recovery. Having questioned these and other eyewitnesses, the journalists provided comprehensive coverage of the boy’s miraculous healing.

It all began when his parents, who had lost all hope, heard from some acquaintances about Fr. Ioannis Marelis, rector of St. George’s Church in Xanthi, who keeps a skufia (skull-cap) of Venerable Paisios of Mt. Athos.

“I realized that I would not have time to bring St. Paisios’ skufia, as it was in the city of Alexandroupoli, very far away, at that moment. In that situation, it was better to ask Abbess Anna of St. Porphyrios Convent, located near the city of Xanthi, to give me the epitrachelion of Venerable Pophyrios, which is kept at their community. I went to Kavala where Demetrius was at hospital and began to pray for his recovery. There wasn’t a clean spot on the boy; he was badly disfigured,” Fr. Ioannis recounts.

The priest asked the doctors and nurses to allow him to put the saint’s epitrachelion on the injured teenager’s head. Many people were praying for a miraculous healing for Demetrius at that time.

“I uttered: ‘Christ is Risen!’, as it was during the Paschal period. At that very moment, the medical apparatuses attached to the boy began to emit sounds resembling an alarm system, as if something had happened to the patient,” the priest said, continuing his account.

The following day, Vasilios Nikolopoulos, who was very moved and excited, called Fr. Ioannis. The boy’s father related the details of the conversation to journalists: “A miracle has occurred! The boy started moving his arms and legs! The doctors have admitted that it’s an unexplainable phenomenon! Because of his serious brain injuries, medics had practically no hope for the patient’s recovery. However, Demetrius has completely regained consciousness. All brain functions have been restored. We have experienced a true miracle. We have been praying for him all together. Our son has been saved!”

Information on this miracle has also been confirmed by nuns of the Convent of St. Porphyrios of Kafsokalivia.

Nearly two weeks before the above events, another miracle had occurred at a hospital in the city of Kavala.

A twenty-two-year-old man was hospitalized and diagnosed with “clinical death.” The young man’s parents set their hope in God and the heavenly intercession of Venerable Paisios. After a skufia of the holy elder had been brought to the hospital the patient’s health was fully restored.

The hospital in Kavala has confirmed this miraculous event. What St. Porphyrios of Kavsokalyva and St. Paisios the Athonite Said About Each Other
Hieromonk Christodoulos the Athonite
One morning in 1981, when I was a young monk, I went to see Elder Paisios, to ask him if there was another contemporary holy elder through whom Divine Grace was at work...
Comments

Lorraine kavalkovich 6/9/2017 10:09 pm
I read this article at the dr.'s office where my husband will begin radiation after cancer surgery. By the grace of God, he has been healed of cancer many times, but God allows him to go through the struggle for the salvation of his soul. Saint Paisios and Saint
Porphyrios pray for Andrew.

Matthew6/9/2017 7:43 pm
Thank you for translating this. Just this morning I read the Russian version and thought, 'I'd love to share this story, hopefully it will get translated soon.'