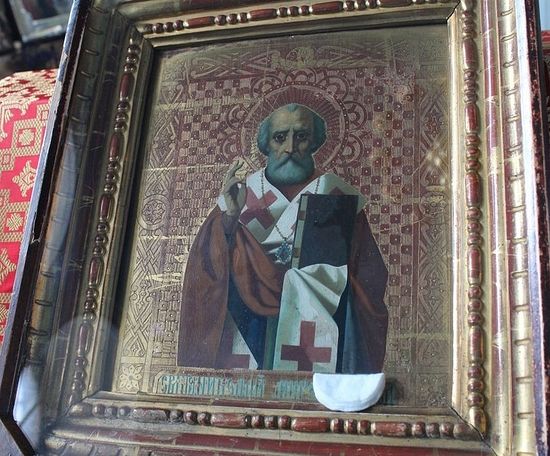 An icon of St. Nicholas the Wonderworker in the Cathedral of the Tikhvin Icon of the Mother of God in Dankov, 200 miles southeast of Moscow, has begun streaming myrrh, reports LipetskMedia.ru.

Droplets have clearly appeared on the image, forming a small stream flowing from the Gospel depicted being held in the holy hierarch’s hand. The faithful have been using a piece of cotton to collect the streaming myrrh.

This rare phenomenon is a truly special sign for the Orthodox faithful of the local town. If the icon continues to exude the blessed myrrh, then a special diocesan commission will be sent to Dankov to investigate the myrrh-streaming icon.

According to the cathedral rector Fr. Vladimir Myasoedov, the unique occurrence coincides with two significant events. The first is the approaching celebration in honor of the finding of the Tikhvin Icon of the Mother of God, which has been the Heavenly protector of the Dankov people for exactly 200 years. Second is the presence of the relics of St. Nicholas, brought from Bari, Italy, in Christ the Savior Cathedral in Moscow from May 21 to July 12, and in the St. Alexander Nevsky Lavra in St. Petersburg from July 13 to 28. More than 500,000 Orthodox faithful have already stood in line for hours to venerate the relics of St. Nicholas.