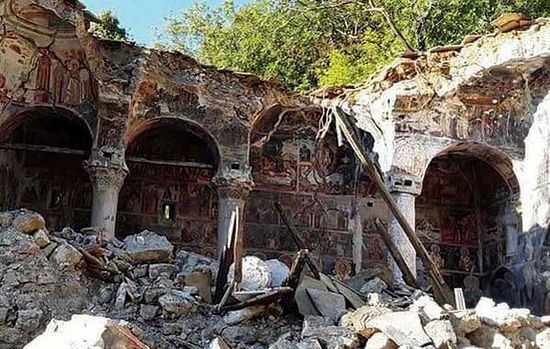 The Orthodox heritage in Albania has suffered another blow with the decay of the Monastery of St. Athanasius in Kato Lenitsa, founded in 1797. Due to the idleness of authorities, who confiscated the monastic buildings but undertook no measures to restore the landmark, the monastery sustained irreparable damage in the winter of 2017. The monastery currently lies in ruin, reports AgionOros.

Attacks on Orthodox churches have become common practice in modern Albania. In a number of cases, the confiscation of valuables and the destruction of holy sites have been carried out by the state itself. In August 2013, hired government thugs attacked an Orthodox Church in the southern Albanian town of Përmet, smashing icons and crosses and beating up worshipers. In early 2015, the government unilaterally decided to destroy the fencing around the Tirana Cathedral of the Resurrection of Christ.

Another church of St. Athanasius, in the southern Albanian town of Dhërmi, suffered two incidences of vandalism in late August, 2015, which the local media attempted to justify. A few days later the church was again attacked, this time being completely destroyed.

Many holy objects from Orthodox monasteries and churches have been stolen and taken abroad and sold on the black antiques market. Police were able to track down and arrest two members of a band of smugglers in Tiran in 2013, who had over 100 icons and works of art that had been stolen from churches to be sold abroad.

Unique frescoes of the noted 16th century iconographer Onuphrios were destroyed some time ago in central Albania.

A few months ago, unknown assailants stole 18 Byzantine icons from the Church of St. Marina in Lambovo. In the city of Përmet, under the pretext of “collecting old debts,” civil servants stole icons, sacred vessels, and even a bell from the Orthodox Church of the Entrance of the Theotokos into the Temple.

Metropolitan Andrei of Konitsa, Greece, near the Albanian border, has underlined that not only the Orthodox Church, but also the Greeks living in Albania experience serious pressure. Their private property is confiscated, and Greek communities are persecuted and closed. “The Albanians make no secret of their plans to create a ‘Greater Albania,’ which, in their plans, will include large areas of neighboring Orthodox states,” the bishop said. Panepirotic Federation Condemns Brutal Attack Against Greek Orthodox Christians in Albania
The Panepirotic Federation of America (POA) strongly condemns the brutal attack on a Greek Orthodox church in the city of Premet in southern Albania on August 16 by hired government thugs who smashed icons and crosses and beat up worshippers trying to defend the only Christian house of worship in the city.
Comments

Alan6/16/2017 5:43 am
Albania has come under the influence of Islam again. Unfortunately, it is NOT the religion of peace.
×