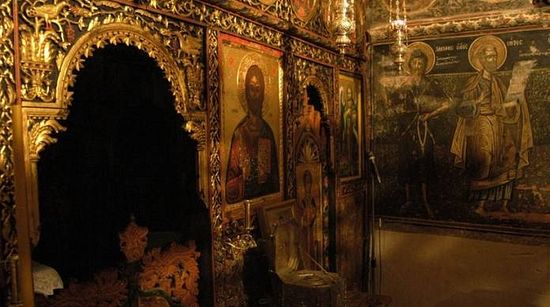 Two churches and four houses were recently attacked by night in the Greek mountain village of Xirovalto in the Pogoni municaplity, near the Greek-Albanian border, 195 miles southwest of Thessaloniki, and other villages.

“We will not become slaves in our homes,” is the cry of despair of the few guards living on the border, living in fear of the Albanian thugs who easily pass into Greek territory.

Police were called late in the afternoon on Sunday when local farmer Sophia Demetriou and another villager noticed that the Church of St. Parasceva had been attacked, reports Romfea. They then locked themselves in their houses, afraid to come out until the police arrived.

“We saw that the church’s windows had been broken and were opened… Although we have a key to the church we didn’t open it until the police came, because we were afraid to find someone inside. We wanted to go to the other houses in the village to see what was happening, but we were afraid… A month ago a pair of breeders in the next village over, Pontikates, found some Albanians outside their home with Kalashnikov machine guns. We are in a panic,” Demetriou said.

“We don’t want to leave our homes that we built with our own blood,” she exclaimed.

When police arrived it was discovered that two icons had been stolen from the church. The same parish of St. Parasceva was also attacked a year earlier, when thieves removed icons from the iconostasis and stole the epitaphios (plashchanitsa).

It was also reported that on the night of Friday to Saturday houses were burglarized in Ioannina. An icon, embroidered epitaphios and two metal candlesticks were also stole from the Church of St. Nicholas in Xirovalto. Similar cases have been reported just over the border, in small Greek villages in Albania.

Pogoni mayor Kostas Kapsalis believes it is likely the same group looting on both sides of the border. “The villages are at the mercy of Albanian criminals,” he said. “Despite the commitments repeatedly made by those responsible to reopen military posts and that police presence would be strengthened at the border, with thermal cameras, we have as yet seen nothing.” The lack of security has the villagers sleeping with guns and afraid to leave their homes, the mayor lamented. A mosque to be built in Athens – Parliament amends law
The Parliament of Greece has made amendments to the state’s legislation allowing the building of a mosque in Athens.
Comments
×