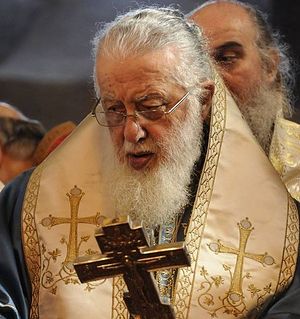 Photo: Patriarchate.ge
The idea of establishing a constitutional monarchy in Georgia was one of the issues discussed by Patriarch-Catholicos Ilia II and Speaker of Parliament Irakli Kobakhidze and the Chairman of the Legal Affairs Committee Eka Beselia at a recent meeting, reports RIA-Novosti.

His Holiness took the initiative on Sunday during the Divine Liturgy, stating in his homily that “Georgia has a monarchical tradition. A constitutional monarchy would bring peace to the country.” He added, however, that such a decision could not be made soon.

In his homily delivered at Holy Trinity Cathedral in Tbilisi, the primate also stated, “Perhaps we should think about who we were in the past, who we are today and who we want to be. We must remember that Georgia has a monarchical tradition that draws its origins from the Hellenistic period,” reports Romfea. “We have to look at our past, our present and our future,” the patriarch underlined.

“The patriarch’s position was that he looks upon the subject of a constitutional monarchy with hope, and believes it will introduce a special role into the history of the state, if, of course, the idea proves acceptable to society,” said Botkoveli.

The patriarch’s attitude towards restoring the country’s monarchy was welcomed by the ruling “Georgian Dream” party, according to party chairman Mamuka Mdinaradze, as micetimes.asia reports.

“The restoration of the constitutional monarchy, perhaps, would give the country a certain feature of individualism and charm from many points of view,” said Mdinaradze, commenting on the patriarch’s Sunday homily. “The patriarch’s position always deserves great respect,” he added, noting that it’s too early to talk of such a revival, but perhaps the country could be ready for it in 10-20 years. The most popular person in Georgia is Catholicos-Patriarch Ilia II
DNI research in Georgia is financed by the Swedish International Development Cooperation Agency (SIDA). Polls are conducted by the Caucasus Research Resource Center (CRRC).
Comments