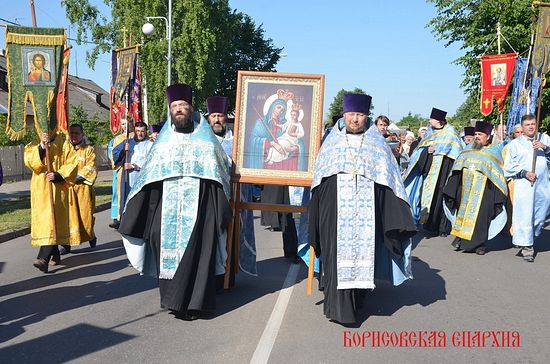 The Marinogorsk Icon of the Mother of God, commemorated on the second Thursday after Pentecost, was festively celebrated in the Belarusian city of Marina Gorka on June 15 this year, reports the Borisov Diocese.

The service began on the town square with the praying of the Moleben and Akathist to the Marinogorsk Icon, celebrated by His Grace Benjamin of Borisov and Marinogorsk with the clergy of the Borisov Diocese. After the moleben, the prayerful gathered processed to the St. Alexander Nevsky Cathedral, where His Eminence Metropolitan Pavel of Minsk and Zaslavl celebrated the Divine Liturgy, concelebrated by several other Belarusian hierarchs, and a number of local clergy. 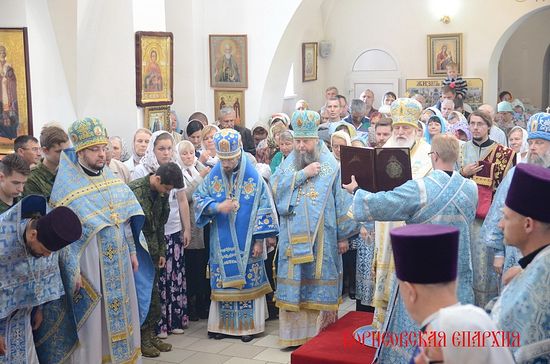 At the prayer behind the ambo, patriarchal exarch Met. Pavel celebrated the Magnification to the Marinogorsk Icon of the Mother of God. After the service all present were gifted with copies of the miraculous icon and invited to a common meal organized for the pilgrims.

Bp. Benjamin welcomed His Eminence Pavel, commenting on the significance of the feast for the local diocese, saying, “This feast is very important for us. Many people have received consolation… People have shared their cases of miraculous help; we have them recorded. We know that as the Mother of God has given help, so she will continue to comfort all those who come to her icon.”

Met. Pavel in turn spoke of how the icon reminds us of the ever-present grace of God: “Today’s commemoration of the wonderworking Icon of the Marinogorsk Mother of God is another Divine sign for us to remember that the Lord is always near, and that the Mother of God is always near and ready to help us. Most important is that we not lose our faith in God and the meaning of man’s life on earth.”

One parishioner of the St. Alexander Nevsky Cathedral, Ksenia Maiko, recalled how God healed her mother of stage four cancer of the spine through the wonderworking Marinogorsk Icon. She was diagnosed on May 29, six years ago, and doctors expected her to die by August—chemotherapy did not work. Ksenia and her children went to pray before the miraculous icon and beseech the intercession of the Mother of God, and her mother lived past August. In October, a doctor at the traumatology institute looked at her spine, saying, “Look, on this MRI she has stage four cancer, so it’s bright red. The July MRI shows a lighter color, meaning there is only inflammation. Today’s MRI shows nothing on this place.” “Glory to God. My mama,” Ksenia continues, “is still alive today. She had surgery, and she walks on crutches, but she takes care of herself, and with God’s help is alive and well.”

A pilgrim from Berezino, Lyubov Ivanovna, also recounted how prayers before the miraculous icon healed her 3-year-old grandson who had been suffering from a 104 degree temperature. “It’s just a miracle,” she said. “The whole family arrived here on Sunday and prayed a moleben to thank the Mother of God. I came here again today with hope—my ear is very sore. I came to pray before the icon of the Mother of God, to ask her help and intercession.”

The Marinogorsk Icon of the Mother of God has a long history, with the local people venerating the Mother of God since ancient times. Local tradition says the wonderworking icon appeared to a certain Isidore during a serious illness. In gratitude for his healing, he built a hill chapel and placed the icon inside, spending the rest of his life in prayer there. The building was burned by Napoleon’s army in 1812, although the icon survived and the soldiers were struck blind. The chapel was rebuilt after the war. 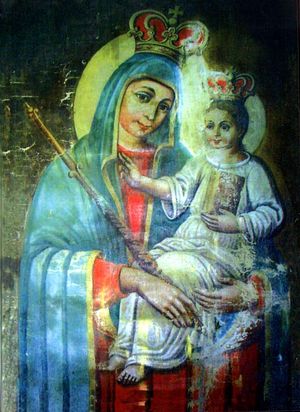 Locals began to especially venerate the Marinogorsk Icon from 1863, carrying it in three cross processions annually: February 19 in memory of the liberation of the serfs; August 30 for Tsar Alexander II “the Liberator’s” name’s day; and the ninth Thursday after Pascha (the second after Pentecost) in memory of the reunion of certain Uniates with the Orthodox Church.

In 1871, the construction of the magnificent stone church of St. Alexander Nevsky, a national monument to the abolition of serfdom, was completed, becoming the new home of the miraculous Marinogorsk Icon. The temple was built in part by donations from local peasants. The church was blown up by the godless Soviets on November 7, 1939, with many other churches of the Pukhovich deanery. However, by the providence of God, one church survived, in the village of Blon, to where the icon was then moved.

The people continued to honor the icon during the dark years of communism, although its history and miraculous stories began to fade in the people’s memory. The icon was lost at some point, although found again in 2001. Metropolitan Philaret of Minsk celebrated the Divine Liturgy that year on the feast of All Saints of Russia in the Church of the Holy Trinity in Blon, establishing the icon’s feast on that day, the second Sunday after Pentecost. The icon was transferred to the newly-built St. Alexander Nevsky Cathedral in Marina Gorka on September 8, 2010. An akathist, magnification, troparion, kontakion, and prayer were composed in honor of the icon. Met. Philaret later returned the icon’s feast to the second Thursday after Pentecost, in connection with its historical commemoration. Albazin Icon of Mother of God miraculously saves woman from deadly disease
The Blagoveschensk Diocese has been collecting true stories of healing associated with the Albazin Icon since December 2015. Among them is the story of a woman who had been cured by cancer by rubbing oil from the icon on the spot of her tumor, and a woman to whom the Mother of God predicted the birth of her son.