Only the Orthodox Church can be called apostolic—Met. of Nikaia 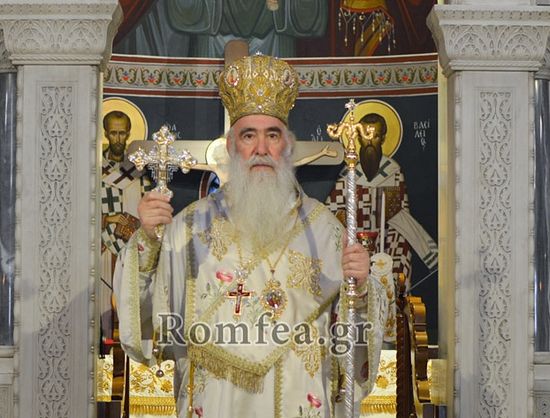 Metropolitan Alexios of Nikaia, Greece celebrated the Divine Liturgy today for the new calendar feast of the Synaxis of the Twelve Apostles in the church of the same name in Nikaia. Recalling the labors and teachings of the holy apostles, the hierarch emphasized in his homily that only the Orthodox Church has true apostolicity, reports Romfea.

Met. Alexios was joined in celebrating the Divine Liturgy by parish rector Fr. Iakovos Delli and other clergymen of the holy metropolis.

“We all know that one of the four attributes of our holy Church which are referenced in the Nicene Creed is apostolicity,” the Greek hierarch noted in his homily. “Our Church is called apostolic,” he continued, expanding upon the creedal affirmation read by the faithful at every Divine Liturgy, because, “the ministration of the Church’s Mysteries comes from ordination through a continuous and unceasing succession from the holy apostles.”

However, while the Roman Catholic confession also has such succession, tracing the lineage of Roman bishops back to apostolic times, His Eminence distinguished the true apostolicity of the Orthodox Church, which it alone possesses “because throughout the centuries the Orthodox Church keeps the authentic teaching as it was handed down by the apostles intact.” That is, the Orthodox Church has faithfully and earnestly contend[ed] for the faith which was once delivered unto the saints (Jude 1:3). Orthodoxy is a Way of Life

Orthodoxy is a Way of Life
A talk with Marilyn Swezey, the secretary of Bishop Basil (Rodzianko)
My interviewee has had an extremely interesting and unusual life for an American woman. Charming, intelligent, she looks some 15 years younger than she really is. And behind her there is a long life full of the hard labors of a noble, self-sacrificing person who seeks to see Divine providence in every turn of her life. Here she is: secretary of Bishop Basil (Vasily) Rodzianko, assistant to Metropolitan Jonah (Paffhausen), an expert in the Russian literature and arts, honorable parishioner of the Cathedral of St. Nicholas the Wonderworker, Marilyn Pfeifer Swezey.