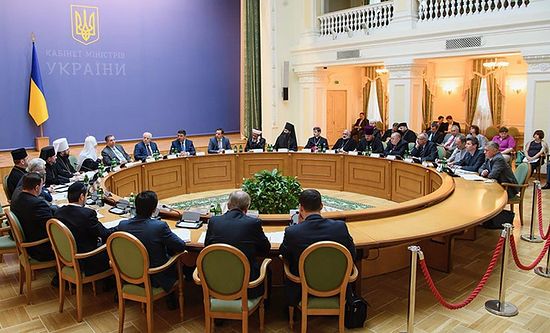 A meeting of members of the Ukrainian Council of Churches and Religious Organizations with Prime Minister Volodymyr Groysman was held yesterday, in which a number of issues in the Church-state sphere were discussed, including the possibility of introducing foreign gender terminology into the Ukrainian legal field, reports the Information-Education Department of the Ukrainian Orthodox Church.

With the blessing of His Beatitude Metropolitan Onuphry, vicar bishop of Kiev Varsanuphy of Borodyansk and deputy chairman of the Department for External Church Relations of the Ukrainian Orthodox Church Archpriest Nikolai Danilevich participated in the meeting.

During the meeting, the various sides discussed a number of issues touching upon Church-state relations, in particular, issues of family and moral values. The representatives of the Ukrainian religious organizations unanimously reaffirmed their opposition to the possibility of adopting the Istanbul Convention, which introduces new terms, foreign to the Ukrainian legal world, including the terms “gender,” “gender identity,” “gender sensitivity,” “sexual orientation,” which go beyond what is acceptable in Ukrainian society and distort the understanding of gender equality as equal rights for men and women.

Participants also raised the issue of legal regulations in the sphere of defense, chaplaincy, and mobilization. In particular, Bp. Varsanuphy expressed concern about the limitation of the chaplaincy ministry of the Ukrainian Orthodox Church in the Ukrainian National Guard. According to the primate’s statistics, at least a third of military personnel in law enforcement agencies are members of the canonical Ukrainian Orthodox, and therefore the limits placed on the Church’s ministry are discriminatory. The prime minister promised to deal with the situation.

At the end of the meeting, it was agreed to maintain permanent dialogue between the council and the government to solve current issues in the field of Church-state relations. Poll: Most Parents of Public School Students Oppose Obama's Transgender Bathroom Policy
Among Americans with elementary and secondary school age children, those most directly impacted by the Obama administration's latest order, 55% are opposed.

A French court recognizes a “neuter” gender
For the first time in history a French court has recognized existence of “a third gender”, complying with the request of a 64-year-old man who wished to remain anonymous.
Comments

Roman7/6/2017 9:42 pm
If the clergy of the UOC-MP are not loyal to the Ukrainian State and People - there have been several instances in the past where the UOC-MP chaplains urged the soldiers at the front to throw down their arms and refuse to fire at the enemy; and of others urging young Ukrainians to refuse to be mobilized into the Armed Forces of Ukraine - how can anyone allow them to serve as chaplains in the National Guard. In most countries, such conduct is called TREASON.
×