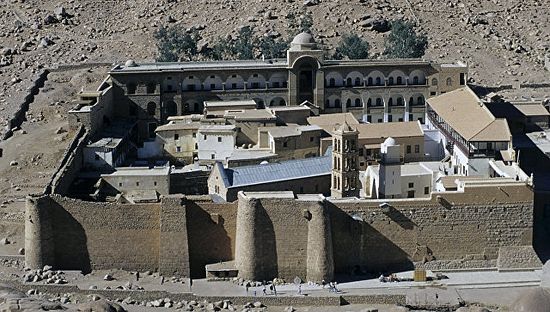 A 6th century AD manuscript containing recipes of the “father of medicine,” the ancient Greek physician Hippocrates, was recently discovered in the library of St. Catherine’s Monastery on Mt. Sinai, reports RIA-Novosti, with reference to the Egyptian newspaper Ahram.

The manuscript was discovered during restoration work in the library. The discovery was publicly announced by the Egyptian Minister of Antiquites Khaled El-Anani. The manuscript also contains three other medical recipes written by an anonymous scribe. One of them is illustrated with drawings of medicinal herbs.

The discovered artifact belongs to the body of manuscripts known as “palmezit,” created out of skin, with two layers. The inscriptions on the first layer were removed before the recipes were recorded on them. “This was done because of the very high cost of skins in those days,” explains Akhmed Al-Nimer, the head of the department for Coptic archaeological documentation of the Ministry of Antiquities.

The second layer of the palmezit manuscripts contains the Biblical text, known as Codex Sinaiticus. This was very common in the Middle Ages.

There are more than 6,000 manuscripts in the St. Catherine’s library. The most ancient of them dates to the 4th century AD. About 600 of the manuscripts are written in Arabic, Greek, Ethiopic, Coptic, Armenian, and Syrian, mainly concerning history, geography, and philosophy. Climbing Holy Mount Sinai
A photo gallery
Mount Sinai is a special place for Christians. Here God appeared to Moses, spoke with him and gave him ten commandments; here St. John the Climacus, Abbot of Mount Sinai, lived at the Monastery of St. Catherine, at the foot of the mountain. And the mount itself with its steep steps is a visible symbol of asceticism. The Ladder of Heavenly Unity: St Catherine’s Monastery of Sinai

The Ladder of Heavenly Unity: St Catherine’s Monastery of Sinai
Continuing Orthodox monasticism’s oldest unbroken tradition, Sinai monks still liturgize, shoeless, over the roots of the Burning Bush. On the holy ground where Moses was commanded to remove his sandals – together with all earthly logic – monks turn diversity’s polarizing forces to unity – some of the ways St. Catherine’s Monastery of Sinai brings Byzantium’s patristic spirit into the modern era as living tradition. St. Catherine's Monastery on Sinai becomes Muslim organization's ISESCO world heritage site
This step of ISESCO has become the most important "milestone" in the process of the formation of a modern pilgrimage route for Christians from Europe through Alexandria to Sinai and then, to Jerusalem.
Comments

Lynette L King-Donnelly7/7/2017 6:49 pm
Blessed be to God whoever thought to keep these a thank you and God Bless you. amen
×