Schedule for Glorification of St. Mardarije of Libertyville and All-America announced 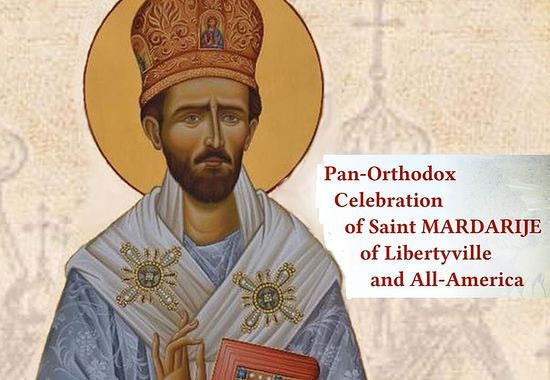 The schedule for the upcoming ceremonies surrounding the official glorification of St. Mardarije of Libertyville and All-America on July 14-16 is now available on the site of the Serbian Orthodox Church, as well as the site of St. Sava Monastery in Libertyville, where his incorrupt relics lie.

The weekend will begin with a symposium on “The Life and Times of St. Mardarije,” to be held at Holy Resurrection Serbian Orthodox Cathedral in Chicago. Presentations include “Russia in Mardarije’s Time: From Reform to Abyss” by Srdja Trifkovic, PhD, “Reflection on the Newly Published Memoires of Bishop Mardarije” by Nicholas Groves, PhD, and “St. Mardarije's Russian Context: Reflections on Intellectual and Religious Developments in Late Imperial Society” by Nicholas Ganson, PhD, to be followed by Vespers, dinner, and the keynote address, “St. Mardarije: Wondrous is God in His Saints” by His Eminence Metropolitan Amphilohije of Montenegro and the Littoral.

“This Symposium will be a fitting start to the Glorification weekend because it will show the times and events that shaped the life of St. Mardarije, how he was in dialogue with them, but also how he responded to them and attained that true measure of purpose which is sainthood,” said His Grace Bishop Longin.

The weekend continues on Saturday at the New Gracanica Serbian Orthodox Monastery in Lake Villa, Illinois, with the celebration of the hierarchical Divine Liturgy, an oratorical festival, lunch, and the glorification Vigil for St. Mardarije at 5:00 PM.

Finally, on Sunday, the glorification Divine Liturgy will be celebrated by His Holiness Patriarch Irinej of Serbia at St. Sava Monastery, where worshipers will have the opportunity to venerate the incorrupt relics of St. Mardarije. The Liturgy will be followed by a banquet for hierarchs and honored quests and a picnic style lunch for all pilgrims, with the glorification program beginning at 2:30, and traditional Serbian festivities at 4:00.

St. Mardarije labored tirelessly in America, and personally founded the St. Sava Monastery where he was buried after his repose on December 12, 1935. The Holy Synod of the Serbian Orthodox Church added his name to the diptych of saints on the Church’s calendar at its May 29, 2015 meeting. His relics were discovered to be incorrupt on May 5, 2017. Holy Missionaries MARDARIJE (Uskokovic) and SEBASTIAN (Dabovich) Newly Proclaimed as Saints of the Orthodox Church!
The Holy Assembly of Hierarchs of the Serbian Orthodox Church during its regular session on May 29, 2015, added the names of Archimandrite Sebastian (Dabovich) and Bishop Mardarije (Uskokovic), clergymen and preachers of the Gospel, God-pleasing servants of the holy life, and inspirers of many missionaries, to the Dyptich of Saints (Calendar of Saints) of the Orthodox Church
Comments