Muslim refugees on island of Lesbos terrifying and driving out Christians 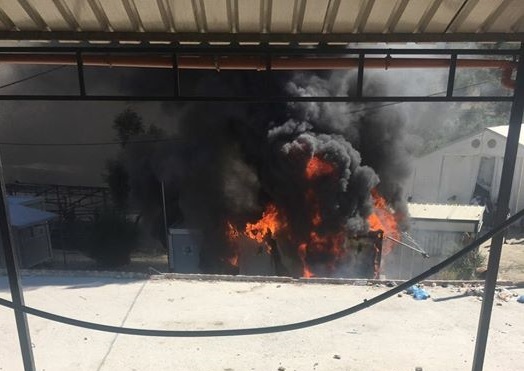 Several clashes have broken out in recent days at Lesbos Island’s Moria Camp for refugees, with Greek authorities arresting 35 Muslim rioters who threw large rocks at police officers and set fire to tents both inside and outside the bounds of the camp. A disabled Christian was nearly burnt alive while sleeping in one of the shelters, reports Pakistan Christian Post.

Rioters were protesting another asylum seeker’s recent deportation back to Turkey, according to Greek Reporter.

Very few Christians are currently taking refuge at Moria Camp, as most flee the island after experiencing persecution at the hands of Muslims. Moreover, Greek government policy prevents homeless Christian refugees fleeing persecution at Moria from applying for asylum and getting help from the United Nations. A “geographical restriction” essentially blocks asylum seekers from applying with authorities on the mainland without returning to the camps where they were persecuted, excepting only those with a severe health condition. According to the Pakistan Christian Post, the policy is meant to facilitate refugee tracking by limiting their movement.

“Christians are being prevented from holding church services, worshiping and praying by their Muslim neighbors. Moreover, reports of tents being burned down, violence, bullying, harassment and severe threats paint a very bleak picture of the quality of life for Christians caught up within the camp,” reads a plea from the British Pakistani Christian Association to the Greek ambassador to the United Kingdom. “We are seeking your help in obtaining a change in the current Greek policy in which the risk of proven re-persecution of Christians counts as a mitigating factor for asylum assessment for escapees of Moria Camp,” the message continues.

Some Greek hierarchs have spoken out against the influx of refugees and the damage it is causing to Greece and Greek culture. In March 2016, Metropolitan Ambrose of Kalavryta stated “No! We cannot shelter so many Islamists who are forcibly being sent to our country in order to seize it and change its identity! We sympathize with the refugees and accommodate them, feed and clothe them, protect them and so on. But we cannot allow them to stay in Greece forever!”

Having fled their homelands to escape such persecutions, Christians are again faced with attempts at forced conversion and bans on their worship. Such problems exist not only at Moria Camp, but in camps on the mainland as well. In addition to persecution, the camps are also kept in poor condition and many women complain of sexual harassment.

Such conditions also exist throughout Europe. In January 2016, Igumen Daniil (Irbits), abbot of the St. George the Victorious Monastery in Gotschendorf, Germany, wrote in a letter to the Federal Minister for Special Affairs and Head of the German Federal Chancellery Peter Altmaier that, “Christian refugees from Syria, Eritrea and other countries are exposed to humiliation, manhunts and brutal harassment in the camps for refugees by Muslim neighbors. This also relates to the Yazidi religious minority. There are frequent cases where humiliation comes to injuries and death threats.”

“Many Christians who came from the Middle East are suffering from such strong harassment that they want to go back home, because their situation there seems a lesser evil as compared to the circumstances at the German refugee accommodation centers,” the priest said.

On Saturday, April 15, 2016, Pope Francis, Ecumenical Patriarch Bartholomew and Archbishop Ieronymos of Athens visited Lesbos, including the Moria camp. The three religious leaders signed a joint declaration that calls on the international community to “respond with courage in facing this massive humanitarian crisis and its underlying causes through diplomatic, political and charitable initiatives.”

More than 14,000 migrants are currently stranded on Lesbos and other Greek islands near Turkey, as a European Union-Turkey agreement last year bans their travel to the Greek mainland to limit migration to Europe. ‘The human heart is surviving’: the woman giving sanctuary to refugees in Lesbos

‘The human heart is surviving’: the woman giving sanctuary to refugees in Lesbos
Activist Efi Latsoudi is one of the founders of an open, self-organised camp for vulnerable refugees who arrive on the Greek island. She has just been awarded UNHCR’s Nansen award for her humanitarian efforts On Lesbos, Today's Refugees Are Met by the Children of Refugees From a Century Ago

On Lesbos, Today's Refugees Are Met by the Children of Refugees From a Century Ago
Constantina Mesisklis and her friends, women in their 80s and 90s, are a fixture on the bench in Skala Sykaminia, the tiny seaside village on the northern coast of Lesbos where 1000s of refugees have been arriving from the nearby Turkish coast every day for months on end.
Comments

T.7/24/2017 6:35 pm
What has happened to the Hellenes? They were destroyed by islamic forces in 1453. Now, they have liberated a small portion of their former lands (the modern Greek state with Athens as its captial), but they behave as if they hate God and the Church and want to live like they are in Paris or Brussels like the "world" that Paul talks about. They rail against God and jail those who even gently entreat the immoral to repent.

I am at a loss for how they expect to be taken serious as modern nation, but at the same time do nothing to stem the tide of medieval barbarians into their land. They have already lost Cyprus, Do they want to lose Lesbos too!!??

Alan7/23/2017 9:55 pm
Chiral and CHristopher both have very prescient comments.
This is another Muslim invasion that Europe cannot and will not win. Within one generation, Sharia Law will be throughout Europe.
They must be repelled NOW!

ChiRho7/23/2017 7:13 am
Only a year ago Pravoslavie sung the praises of Efi Latsoudi and "the human heart." It's linked here at the bottom of the article. An "activist" trained in international law, winning Humaitarian awards from the UN no less. She and her cohorts permanently "occupied" a children's summer camp to facilitate the invasion of muslims from around the world flooding in from Sultan Erdogan's Caliphate. Now we are supposed to be surprised that Christians are being persecuted there? The phoney refugees were trashing Lesbos and harassing the locals long before last year's article on Latsoudi "giving sanctuary" on someone else's property. The evidence has been on Youtube since the first year of the manufactured crisis.
So we are supposed to believe it's Christian to facilitate invasion and takeover by heretical pagans? HA! Tell me what happened to the ancient Christian Middle East? Look up the early Christian cities named in the Holy Scriptures and tell me who controls those places now and what religion they are? And how did they get that way?
Internationalism, Democratic Socialism, Humanism, and Ecumenism are not Christian values. Their fruit is death and destruction, and the evidence is everywhere.

Send the infidel back to where they came from!!!! Do you not remember what they have done to the Byzantine Empire and now to Greece!!!??? Their only goal is to destroy our Holy Orthodoxy!!!