‘The human heart is surviving’: the woman giving sanctuary to refugees in Lesbos 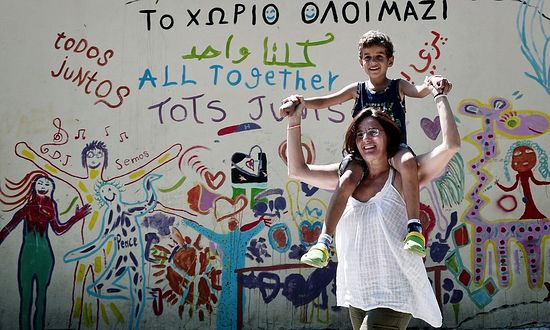 “Leaving the refugees unprotected means you leave your country and society unprotected, and we have to do something,” says Efi Latsoudi, a Lesbos resident who’s seen her hometown engulfed by the worst humanitarian crisis of our time.

Originally from Athens, the 48-year-old human rights activist moved to the Greek island in 2001, and for the past four years has been one of the founders and administrators of an open, self-organised refugee camp, Pikpa. The camp has been run, through all the tumult of the last few years, entirely on the efforts of volunteers and donations.

Pikpa, on the south-east corner of the island, grew out of a solidarity network of local NGOs and volunteers, and started sheltering refugees in 2012. Though the Greeks have been hit by their own economic crisis for eight years, many such as Latsoudi have re-focused their worries on alleviating the urgent needs of refugees.

Latsoudi’s response to the refugee crisis was partly political. “We had refugees starting to arrive on the island in August 2012. I thought that if we don’t do something for these people, we are giving an advantage to the fascist party to raise their power,” Latsoudi says. She felt the neo-fascist party, Golden Dawn, would use the refugee crisis to instil fear and discrimination among Greeks.

“We know people get afraid but we have to work on this. This is the important thing, we can’t say this fear does not exist – of course society, and the volunteers and the refugees were affected by this crisis. But we wanted to create an open, self-organised camp that the local society will participate in, and the refugees will not be detained, but will be recognised in a human way.” 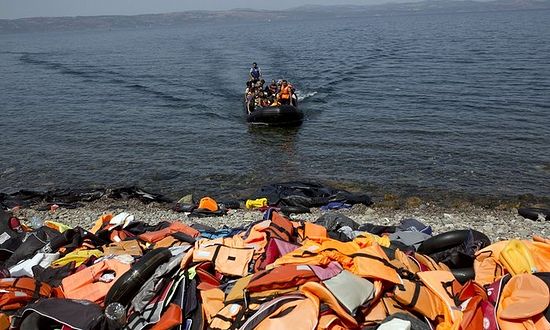 Migrants arriving on Lesbos after crossing the Aegean from Turkey. Photograph: Angelos Tzortzinis/AFP/Getty


As the number of refugees on the island increased, Latsoudi and other volunteers occupied an old children’s summer camp near Mytilene airport. Initially, the camp operated as a hostel, but it has responded to the changing nature of the refugee crisis, and temporary shelter has become permanent.

“I couldn’t imagine this [reaching this point]. But I think if you’re in this refugee solidarity work, you have to be prepared for anything. Because it’s not an organised trip to Europe, there’s always a situation of crisis that can change any minute.”

For Latsoudi, the unity of Greek people and refugees is vital, especially on an island which has a very personal history of migration. Approximately 60% of the 90,000 or so residents in Lesbos are descended from Greek Orthodox Christians expelled from Turkey in the 1920s. “Citizens from Greece are doing this even though they are facing an economic crisis – they are affected by all the uncertainty that it brings to them. But we believe the solidarity of people can be part of the solution. And this is a great thing,” she says.

The Pikpa camp offers shelter, activities, food, and medical support for the most vulnerable refugees, and the families of those who have died at sea. What makes this camp different, Latsoudi says, is humane treatment and an “idea of community”.

She has taken on a monumental task: at the peak of the crisis, this time last year, Pikpa was hosting 600 refugees a day, despite a capacity of just 150, and distributing more than 2,000 meals each day. Lesbos has welcomed 93,600 refugees by sea this year alone – equal to the island’s own population. Though Latsoudi believes the government response has been poor, the reaction of Greek people has been positive. 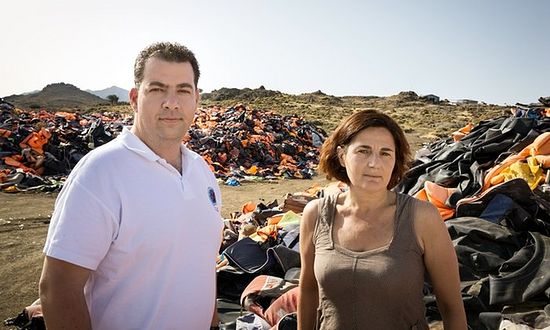 Latsoudi seems to have taken the last few years in her stride. After studying international law at university, she worked in Athens at detention centres for minors. Though nothing could prepare her for the plight of the Syrians, Afghans, Iraqis and other hundreds of desperate people who have passed through Pikpa’s doors, her dedication is unquestionable.

Latsoudi, along with Konstantinos Mitragas, a sea captain and the Hellenic Rescue Team’s secretary general, have both just been announced as recipients ofUNHCR’s Nansen refugee award, a prize running for 61 years, acknowledging the work of humanitarians across the world in helping displaced people. She is humble about receiving the award: “I don’t think that when you act in this field you can have something like this in mind.”

For Latsoudi, the whole island, indeed, the whole of Greece, is equally affected by this crisis. She feels the volunteers are also victims: “Volunteers are traumatised. It’s really dangerous for the people involved. I believe that’s why that we have to change these policies about refugees, because we [the volunteers] are also traumatised several times by what has happened. But we cannot leave them [refugees] alone.”

In the future, Latsoudi hopes the government policy towards refugees will change and there will be a safe passage for those coming across the Mediterranean. This could be a long time coming; in the meantime, what keeps her motivated are the “small things” – “the way that people are laughing and having a good time, and finding ways to overcome difficulties”, she says. “The human heart is surviving, and that’s very powerful.” To help the refugee crisis on the island of Lesvos

To help the refugee crisis on the island of Lesvos
The island of Lesvos has long been a home for refugees, be it Greeks themselves fleeing the Turks on the mainland towards the end of the Ottoman Empire, or those fleeing from the more recent Afghanistan and Iraqi wars, but the situation in the last few years and months has grown increasingly demanding and serious. Now the island, the third largest in Greece, sees thousands of refugees arrive every day, fleeing from Muslim violence and wars in the Middle East and Africa.
Comments

Gavril11/1/2016 4:45 pm
You are absolutely correct, Brother Anthony. I moved my family to Kiev from Germany after two "refugees" tried to separate my 9-year-old daughter from her mother on their daily walk. There is a such thing as pathological altruism, and while Latsoudi my think she is doing God's work, she is simply facilitating the destruction of the Christian West by aiding and abetting Islamic invaders.

anthony9/9/2016 6:13 pm
Whilst it's Christian to be helping others, I think the major concern for a lot of us is with the belief system involved. None of them seek to integrate. They simply seek to conquer. Look at Lebanon as an example. What sickens me even more is that Greece has borne the brunt of this influx - some 60 000 are currently in Greece whilst a recent article in the Mail stated that britain - one of the major protagonists of this crisis has taken in a total of 61! They together with the USA are responsible for this mess. They should sort it out along with the looney bin in berlin. Leave us out of it.
×