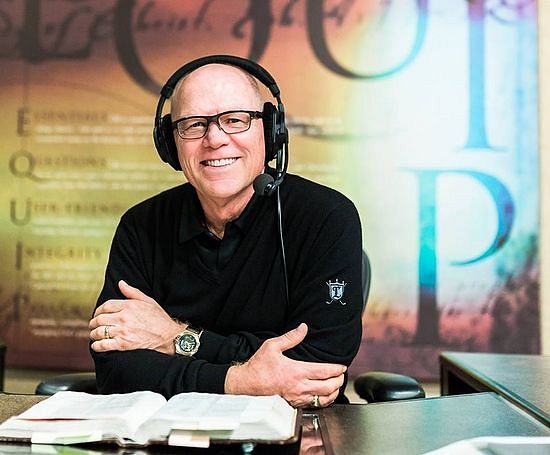 A majority of family members of Dr. Walter Martin, the founder of the Christian Research Institute and original Bible Answer Man, have written and signed a statement asking current Answer Man and recent convert from Evangelicalism to Orthodox Christianity to step down from his position, reports The Christian Post.

67-year-old Hank Hanegraaff and his wife were received into the Orthodox Church this year on the great feast of Palm Sunday, at St. Nektarios Greek Orthodox Church in Charlotte, NC.

Jill Martin Rische, eldest daughter of Dr. Martin and co-leader of Walter Martin Ministries stated that she and many other Evangelicals were “shocked and surprised” by Hanegraaff’s conversion, noting that he has since been teaching a blend of Orthodox and Evangelical theology on the “Bible Answer Man” show, which she believes is “fundamentally dishonest,” despite Hanegraaff’s contention that his theological beliefs have remained largely the same.

Speaking of his conversion of his April 9 broadcast, he stated, “In fact I believe what I have always believed, as codified in the Nicene Creed, and as championed by mere Christianity,” and elsewhere he has stated, “So I stand shoulder-to-shoulder with Evangelicals, with Roman Catholics, with Orthodoxy around the essentials of the Christian faith—meaning the main and plain things.”

The statement also includes the signature of Rische’s husband Kevin, Martin’s widow Darlene, and his children Daniel, Elaine, and Debbie.

Rische has pointed out that her father started CRI in 1960 as a Protestant ministry, and said it is therefore problematic for it to be run by a member of the Orthodox Church, pointing to an article on waltermartin.com that emphasizes the differences between Orthodoxy and Evangelicalism.

“It is not OK for an Eastern Orthodox believer to run a Protestant ministry,” she said, adding, “You have to be one or the other. It is fundamentally dishonest from a theological standpoint for Hank Hanegraaff to be teaching Eastern Orthodoxy on the ‘Bible Answer Man’ program.”

The statement goes on to claim that Dr. Martin “would be appalled” by Hanegraaff’s conversion, and thus he must step down as president of CRI: “To do anything less, from a Biblical perspective, is unethical and profoundly dishonest.”

For instance, on his May 18, 2017 broadcast, while stating, “I joined an Orthodox Church because I believed in the Real Presence of Christ in the Eucharist,” Hanegraaf went on to say, “Can you partake of the Eucharist properly-administered in other contexts? I think the answer is ‘yes,’ and ultimately remember that I’m a champion for mere Christianity… ‘In essentials unity, non-essentials liberty, and in all things charity.’”

Out of step with the rest of her family, Cindee Martin Morgan, another of Dr. Martin’s daughters declined to sign the statement, stating, “My father, Dr. Walter Martin, taught that the Catholic Church has the essential ‘core’ doctrine of Christianity. He didn't agree with some of the teaching added by the Church and warned against it… Given the fact that the Eastern Orthodox Church is very similar in ways to the Catholic Church—and holds to the essential core doctrine of Christianity—I believe Dr. Martin would view this Church (Eastern Orthodox) the same way.”

“He would never declare that someone had ‘left the faith,’ in either of these churches, if the person professed faith in Jesus Christ demonstrated by the fruit of their life,” she added.

Having carried the program for more than 25 years, Bott president Richard P. Bott II has stated that he dropped the show because “we want to make sure our listeners know that the programming that we have on Bott Radio Network is thoroughly biblical.” Hanegraaff responded that he found the statement painful, revealing “an ignorance about Orthodoxy.”

Hanegraaff announced to supporters of his ministry via a May 6th video on his “Bible Answer Man” Facebook page that he has been diagnosed with mantle cell lymphoma, a rare form of cancer.

Despite calling for the Answer Man to step down from his post, Rische has stated that she continues to pray for Hanegraaff, especially as he battles cancer: “I wouldn't want anyone to go through cancer. I've seen it up close, and it's a terrible thing, extremely painful. I would never want to see anyone suffering that, and I would pray for him and his family, and have.” Perry Robinson6/26/2018 10:55 pm
A point of fact. The Martin Family and many former employees have been calling for his resignation for over twenty years, long before he was received. The issues then really have nothing to do with Orthodoxy.

Isidora8/4/2017 1:19 pm
Hank is blessed by God with these inevitable persecutions from the Protestants. There are many things for which they hate the Orthodox, one being our veneration of the Theotokos whom they stubbornly insist is dead and was no big deal--she could have been anybody! As Hank grows in Orthodoxy, which does take time, he will realize the futility of attempts to "blend" truth with heresy. As a convert of many years myself I say it is good that God sends you this strong signal to accept the divorce from Protestantism and learn to love the Theotokos and all the saints. Welcome, Hanegraaffs!

MC7/26/2017 1:12 pm
Also, the Orthodox thing for Hank to do would be to talk to his spiritual father about whether or not to go on, and also ask his advice about the content. If he gets the blessing, then through his spiritual father's prayers, things will go as they should. (Of course, that doesn't mean no attacks will follow from the evil one!)

MC7/26/2017 1:11 pm
I have unfortunately not taken the time to listen to the program or podcast, so no comment about the content. However, how about leaving the Evangelical platform and starting a Bible answer man program on an Orthodox platform with a new title that would not enrage the Evangelicals? They would still have the option of listening or not listening, but perhaps would then leave poor Hank alone.

Panagiota Giakoumis7/25/2017 8:25 pm
I believe a lot of people are ignorant about orthodoxy. A lot of people who hear "orthodox" automatically think "Jewish". How hypothetical these Protestants are. Their religion started over a thousand years after Chist died. Outside of Isreal,the first Christians were Greek and they continue to believe strongly. The first Christians churches were Greek. They,the Greeks, translated the bible. If anyone has Christianity correct..it would be the Greeks. Eastern Orthodoxy is the correct church of Christ. Even Christ himself warned about the deviation of the true Church.Orthodoxy is the only religion that had remained true to the teaching of Christ.

Joanna Valerioti 7/25/2017 5:05 pm
Glory to God that Hank & his wife found Orthodoxy and entered into The Holy Orthodox Church. If it is true that he has been blending Protestantism & Orthodoxy in his broadcast, then I would have to agree that it is best for him m to step down from "The Bible Answer Man" or any other broadcast until his "pnevma" becomes more clear & it is wrong to blend the two, that is heresy. Very often converts wantto quickly write books & teach because they have new zeal,joy. However, I have seen & found that one needs time to truly "experience" actually living the Orthodox Faith before teaching others about it, other than the basics. I speak as a convert of 23 years, living it is best. God be w/Hank.
×