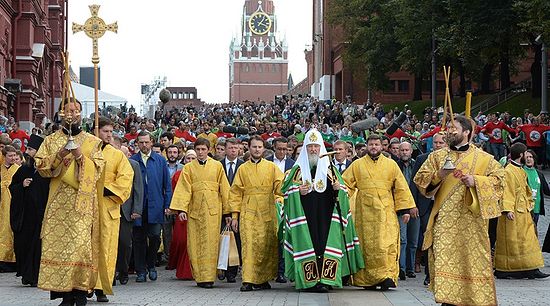 Christianity remains the dominant religion in Russia, and the vast majority of Russians—92-93%—have respect and goodwill for Orthodox Christians in the country. Only 1% expressed a dislike for Orthodox Christians. These results are only slightly different than those of December 2013. 74% responded with respect and good will towards Catholics, with only 5% confessing a feeling of hostility or fear.

Only 13% of Russians responded that they have a feeling of hostility or fear towards Muslims.

However, the increase in number of believers is not necessarily accompanied by a deep faith or a sense of importance attached to religion. The number of those willing to adhere to the Great Lent restrictions has decreased 1.5-2 times in recent years, with 73% responding that they did not change their diet in Lent this year. 9% responded that they fasted in Holy Week, 15% partially fasted, and only 2% responded that they strove to keep the entire fast. Number of Orthodox increase, Catholics decrease in Central, Eastern Europe
The majority of residents of Central and Eastern Europe are Orthodox Christians, their numbers increasing while those of Catholics have been decreasing, according to new findings of the Pew Research Center. Many atheists believe in God
Fr. James Guirguis
One of the worst ideas that has ever been circulated about Christianity is this idea that God is full of wrath and that He is actively seeking people to punish and throw into a place called hell.