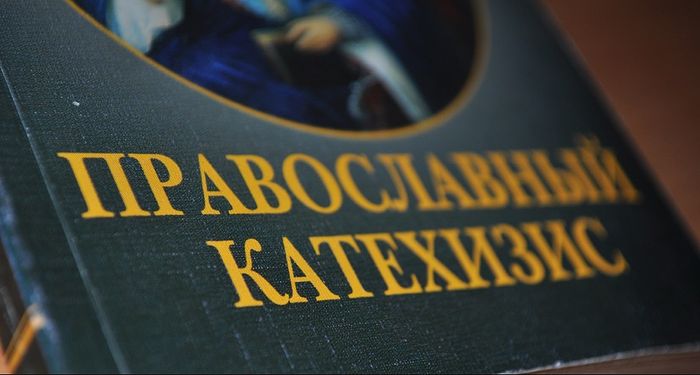 With the blessing of His Holiness Patriarch Kirill of Moscow, the Synodal Biblical-Theological Commission has published a draft version of the Catechesis of the Russian Orthodox Church for Church-wide discussion, reports patriarchia.ru. The final section on the Russian Church’s attitude towards the non-Orthodox has caused some consternation.

The idea of creating a modern catechism was first raised at the Bishops’ Council in 2008, and the Holy Synod instructed the Synodal Theological Commission to being preparing the project a year later. Prominent theologians of the Russian Church, as members of the Biblical-Theological Commission, as well as professors of various theological academies, and specialists in various theological fields have been involved in the project. The first version of the text was completed in January 2016.

The commission unanimously adopted the draft at a plenary session on January 29, 2016, after which it was submitted to the Council of Bishops session on February 2-3, 2016. The council decided to forward the draft to the permanent members of the Holy Synod, the primates of the patriarchate’s autonomous Churches, the first hierarch of the Russian Orthodox Church Outside of Russia, the heads of Synodal institutions and theological schools, and diocesan bishops who expressed a desire to participate in reviewing the text.

The latest version of the text was crafted with the input of those who have been reviewing the text. The new text is now open for Church-wide discussion.

The catechism has the following structure:

Guest reviews are being accepted for Parts I-III, while Parts IV-VI are non-negotiable, as texts already adopted by the Council of Bishops of the Russian Orthodox Church.

Concerns have been raised about the final section, especially as it pertains to ecumenical organizations and meetings. The document “Basic Principles of Attitude to the Non-Orthodox” maintains that Russian representatives to bi- and multi-lateral discussions with other Christian confessions have always unerringly maintained the purity of the Orthodox faith (4.3), and moreover, quotes a Pan-Orthodox meeting in Thessaloniki in 1998:

During Orthodox participation of many decades in the ecumenical movement, Orthodoxy has never been betrayed by any representative of a Local Orthodox Church. On the contrary, these representatives have always been completely faithful and obedient to their respective Church authorities, and acted in complete agreement with the canonical rules, the Teaching of the Ecumenical Councils, the Church Fathers and the Holy Tradition of the Orthodox Church (7.3)

Therefore the document states that, “The Church condemns those who, by using inauthentic information, deliberately distort the task of the Orthodox Church in her witness before the non-Orthodox world and consciously slander the Church authorities, accusing them of the ‘betrayal’ of Orthodoxy.” Such sowers of temptation, according to the document, ought to be subjected to canonical sanctions. The statement included from the Thessaloniki meeting refers not only to schismatics, but also to “certain extremist groups within the local Orthodox Churches,” who “[use] the theme of ecumenism” to criticize Church leadership, “thus attempting to create divisions and schisms within the Church,” seemingly accusing all who oppose Ecumenism as being among those who use “inauthentic information” in the fight against it.

Not all accept the view that Orthodox representatives have never, without exception, compromised any matter of Orthodoxy at ecumenical gatherings and dialogues. Many prominent voices within the Orthodox Church, including St. Justin Popovich, Elder Ephraim of Katounakia, St. Paisios the Athonite, St. Seraphim of Sobolev, Fr. Seraphim Rose, Metropolitan Hierotheos (Vlachos), and many others have been very vocal about the dangers posed by the Ecumenical movement, and following last year’s council on Crete, entire Local Churches have raised the flag, including the Bulgarian and Georgian Churches.

The February 2016 joint declaration between Pat. Kirill and Pope Francis also garnered criticism. For instance, Fr. George Maximov wrote that the document contains expressions “which are by no means indisputable, and sometimes erroneous,” and Dcn. Vladimir Vasilik wrote, “The joint declaration signed by the Pope and the Patriarch leaves one with mixed feelings… there are a whole series of formulations in this document that evoke well-founded anxiety… this meeting was in many points unsatisfactory.” Fr. George also wrote a critical response to the September 2016 gifting of a particle of the relics of St. Seraphim of Sarov to the Pope of Rome.

Most recently, Archpriest Artemy Skripkin of the Tikhvin Diocese has announced that he is invoking Canon 15 of the First-Second Council in order to cease commemoration of Pat. Kirill, as well as Metropolitan Barsanuphius of St. Petersburg and Ladoga, and his own hierarch, Bishop Mistislav of Tikhvin, after unsuccessful attempts to receive clarification on a recent statement from Pat. Kirill at a children’s hospital in which he said, “I know that there are Christians and Muslims here, each addressing one and the same Creator God, and in response to this we receive real help from God.”

Canon 15 of the First-Second Council, held in 861 in Constantinople under the chairmanship of St. Photios the Great, states that if a bishop openly declares a heresy previously condemned, a priest may cease to commemorate him without ecclesiastical sanction. This “walling off” is not considered a schism, but the same canon states that if a priest ceases to commemorate a bishop over a heresy not previously condemned, then his action is considered one of schism.

Having received no explanations over the course of two months, Fr. Artemy writes that he is ceasing commemoration of and thereby breaking communion with the three bishops, and any others who agree with the patriarch’s words, and that the decrees and punishments of the mentioned bishops are accounted as nothing to him.

The full text of the draft catechesis can be found at theolcom.ru, and reviews are being accepted at catechism@theolcom.ru until November 1. Abbot Gregory of Dochariou: Orthodox Church receives no benefit from dialogues with heterodox
Archimandrite Gregory (Zumis), abbot of the Dochariou Monastery on Mt. Athos, has released another article, this time devoted to topical problems of Church life, including persecutions against monks who do not accept the Crete Council, and ecumenical dialogues. Patriarch Kirill: At the present stage of drafting the catechesis, the priority is its Church reception

Patriarch Kirill: At the present stage of drafting the catechesis, the priority is its Church reception
After all the responses are received, the Synodal Biblical-Theological Commission will thoroughly analyse them, introduce the necessary amendments and submit the ready draft to the Holy Synod. The decision concerning the further fate of the Catechesis text will be made by the Synod.
×