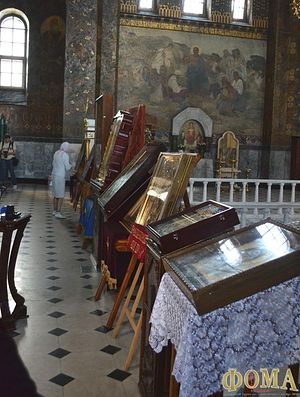 Photo: foma.in.ua
Nearly a million believers have visited and venerated the 11 miraculous icons which traveled throughout Ukraine from July 1 to 26, according to Ukrainian Orthodox Church Chancellor Metropolitan Anthony of Boryspil and Brovary. This was stated at a press briefing at Kiev Caves Lavra before the moleben at Vladimir Hill on the eve of the commemoration day of St. Vladimir and the Day of the Baptism of Rus’, reports Foma in Ukraine.

As a blessing for those who cannot travel, miraculous icons appearing in Western Ukraine were taken to the East, and vice versa, and icons from the North to the South, and vice versa, and throughout the whole country, “And thus we have united all of our Ukraine,” said Met. Anthony. 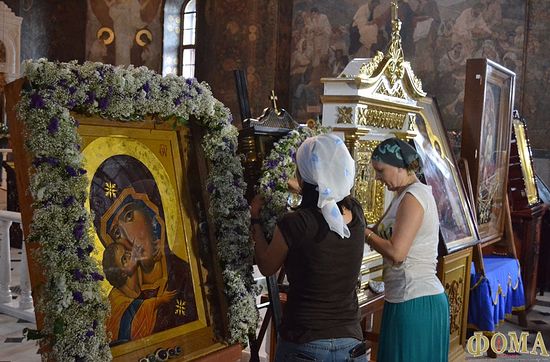 The icons were available around the clock for veneration, and were carried in numerous cross processions. “According to our calculations, about a million people visited the churches where the icons were kept during this time,” the hierarch stated. No provocations have been noted.

The icons will be returned to their home dioceses following today and tomorrow’s events in Kiev in honor of St. Vladimir and the Day of the Baptism of Rus’.

Archpriest Vasily Stetsiyak, who accompanied the Kasperovskaya Icon, recalls, “There were so many people that they couldn’t all fit into the cathedral. People were reverently venerating the holy image late into the night. The flow of people never stopped during the Liturgy… Some people, because they did not have time venerate the icon, knelt down, and we carried the icon over them.” The same thing has happened in other dioceses, the priest said.

“I can’t speak of any miracles or healings, because none have been recorded. The most important thing in the Church is when people, having visited the icon, are freed from their sinful addictions and passions,” Fr. Vasily added.

Fr. Vyacheslav Bronich, who accompanied the Radomyshl Iveron Icon, spoke of when the icon was taken to the Bethlehem children’s camp in the village of Vlasovka in the Kiev Region on July 25. “You should have seen these children’s joyful eyes, heard the children singing—how they glorify the Mother of God… We all need to open our hearts and turn to the Mother of God as children, and she will come and help,” said Fr. Vyacheslav. Annual moleben in Kiev to take place with 11 wonderworking icons
At the end of July, 11 miraculous icons of the Theotokos will be gathered from all corners of Ukraine for the traditional moleben to be celebrated on Vladimir Hill in the capital city of Ukraine.