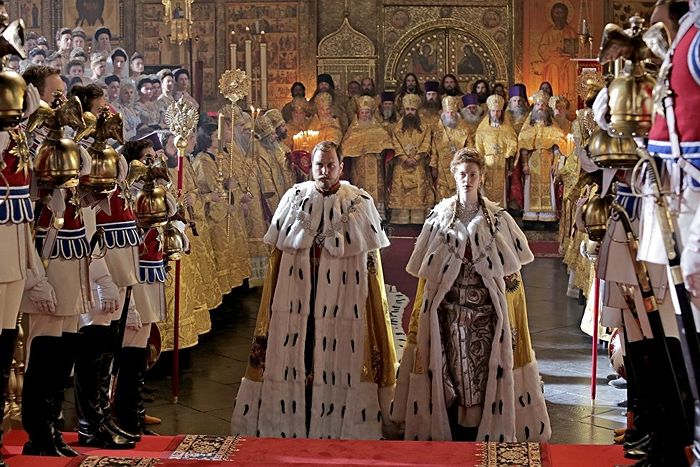 Orthodox activists of the Forty Times Forty movement protested against the new film “Mathilde,” which deals with the early life of the Royal Martyr Tsar Nicholas II, on Friday, standing with banners near the State Duma, the Public Prosecutor, and the Ministry of Culture, reports RIA-Novosti.

“Today, Orthodox believers stood with placards against the film ‘Mathilde’ at the main state buildings—the Ministry of Culture, the State Duma, the Presidential Administration, the Prosecutor’s office, and also the studios of the director Uchitel in St. Petersburg and of the Cinema Fund in Moscow,” a representative of the movement reported.

Movement coordinator Andrei Kormukhin earlier stated that the pickets were planned at those agencies with the authority to make a decision about the film project.

The movie is dedicated to the history of the life of the ballerina Mathilde Kschessinska, who once had a relationship with the future tsar and Royal Martyr Nicholas II. The main role is played by Polish actress Mikhalina Olshansky, and that of the then-tsarevich Lars Eidinger from Germany. Many believe the film is historically inaccurate, provocatively distorting the truth of the pious and holy emperor.

“The pickets were held to express the opinion of the people, who for some reason want to remain on the sidelines of the controversy over ‘Mathilde.’ Each participant made his own poster with his own hands and wrote what he wanted to convey to the decision-makers. We are not against Alexei Uchitel; we are against the blasphemous film which insults the holy tsar, Russian history, and the sensibilities of Orthodox believers with its content,” the activists proclaimed. 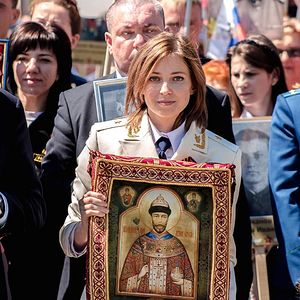 Photo: angelfire.com
The cause against the film has also been championed by State Duma Deputy Natalia Poklonskaya, well known for her great veneration of the Royal Martyr Nicholas II and his family. She has gathered 100,000 appeals and signatures from citizens standing against the film, and has made an inquiry with the Prosecutor General, the Ministry of the Interior, and the Ministry of Culture, she wrote on her Facebook page.

According to her, 37 State Duma deputies have also signed a request to take measures to prevent “insults to the religious sensibilities of believers and the profanation of Orthodox saints,” including the Duma Vice-Chairman.

Although the film has caused a scandal among believers, the chairman of the Synodal Department for Church and Society and the Media Vladmir Legoyda believes it is misguided to organize against the film. Responding to Metropolitan Paul of Khanty-Mansiysk and Surgut’s June 18 call to collect signatures in his diocese against the film, Legoyda wrote on his Facebook page, “I can understand what many do not like in the director’s idea… However, I consider the centralized collection of signatures in parishes of the diocese to ban the film to be a mistake.”

The head of the House of Romanov Grand Duchess Maria Vladimirovna has stated that she is upset with the upcoming release of the film “Mathilde,” but at the same time, that she thinks it is pointless to try to ban it, and other films, as it only draws undue attention.

“The head of the Russian Imperial House of the Romanovs, Her Imperial Highness the Grand Duchess Maria Vladimirovna is disappointed that in the centenary year of the tragic events of the 1917 revolution, and on the eve of the centenary of the regicide, the release of a film is planned, representing the Emperor Nicholas II, the Empress Alexandra Feodorovna, and a number of other historical figures in a completely distorted light, as amoral and mentally unbalanced people,” stated Alexander Zakatov, the director of the Imperial House’s chancellery.

“Mathilde” director Alexei Uchitel has stated that there is nothing in the film that should offend Orthodox Christians. “There is nothing there that can offend the sensibilities of believers. There is no vulgarity there,” he said, although the Imperial House believes he knew full well what the reaction to his film would be.

In contrast to Legoyda, abbot of the Athonite St. Panteleimon’s Monastery Fr. Evlogy and the brotherhood stand behind Poklonskaya and her attempt to ban the film: “We wholeheartedly support you and share your attitude to the project, which dishonors the memory of the holy Royal Martyrs.”

Responding to the deputy’s request for a statement concerning the film, Fr. Evlogy terms the film “deliberately provocative,” saying it “evokes abhorrence from anyone who reveres the history of the Fatherland and preserves the whole of its moral sense.” Noting that the memory of the Royal Martyrs is reverently celebrated with love on the Holy Mountain, the abbot writes that the fact of such a film being released in an Orthodox nation “is deeply distressing and depressing.”

“We cannot characterize this film other than as a mockery of the sensibilities of the faithful,” Fr. Evlogy writes on behalf of his brotherhood.

Metropolitan Hilarion (Alfeyev) had earlier told Uchitel that he did not like his film, characterizing it as “vulgarity.” He also said that he would make his opinion publicly known. Uchitel stated that he respects the metropolitan and his evaluation and thanked him for his honesty.

For his part, Bishop Tikhon (Shevkunov), abbot of Sretensky Monastery and head of the Patriarchal Council for Culture has called the film a “vulgar fraud” and “slander,” stating that it belongs to the genre of fantasy. Speaking in an interview with Russian Gazette, he asked rhetorically, “Why do they make audiences believe in the historicity of these contrived heartbreaking scenes of a ‘love triangle’ in which Nicholas, both before and after marriage, is melodramatically torn between Mathilde and Alexandra?” adding, “What is that? The author’s vision? No—it is slander against real people,” in sharp disagreement with the director.

While the film depicts an ongoing relationship with the ballerina even after Nicholas’ marriage to Alexandra, Imperial House representative Zakatov notes that from the diaries of Nicholas II, his correspondences with Alexandra, the memoirs of Mathilde Kschessinska, and a number of other authentic and reliable sources, it is known that the then-tsarevich’s relationship with the dancer ended in 1894, when the decision was made to marry the future Tsarina Alexandra. According to Zakatov, the 1892-1894 relationship is used as a springboard for “groundless fantasies, capable of harming the good name of the holy royal Passion-bearers and of Mathilde Felixovna Kschessinska in the public mind.”

The film’s premiere is set for October 6 at the Mariinsky Theater in St. Petersburg, with general release slated for late October. Meanwhile, work on a documentary film “Mathilde's Lies,” directed by Sergei Aliev, has begun, to “debunk the myths” surrounding the historical personality of Tsar Nicholas II.

Updated July 31, 8:57 PM to provide more information on the question of the film's historical accuracy.

Castrese Tipaldi8/1/2017 2:30 pm
It's not about money, it's about those who control money, the open worshipers of the devil, who are terrified about the restoration of the Christian Emperor; the only thing that can delay, even for centuries, their planned incoronation in Jerusalem of the antichrist, the one who will come in his own name.

It's not a question of censoring, it's a matter of truth. In a Christian country, there should be not right to publicly lie.
This film is a lie!

A very simple law proposal for the Duma members:
"The conscious public lie is a criminal offence punished with three years of imprisonment, ten years for public officials and a life sentence for justices and public prosecutors. It carries a perpetual banishment from every public office and cannot be pardoned.

No ownership greater than 15% must be allowed in press and media enterprises for any individual or corporation. News and information are always considered public domain."

Alan7/31/2017 9:53 pm
This unholy film is trying to make money from a seedy rumour about the Tsar. This is all about that money, not the truth.
Your protestations are free advertising for this trash. Ignore it and it will go away.
×