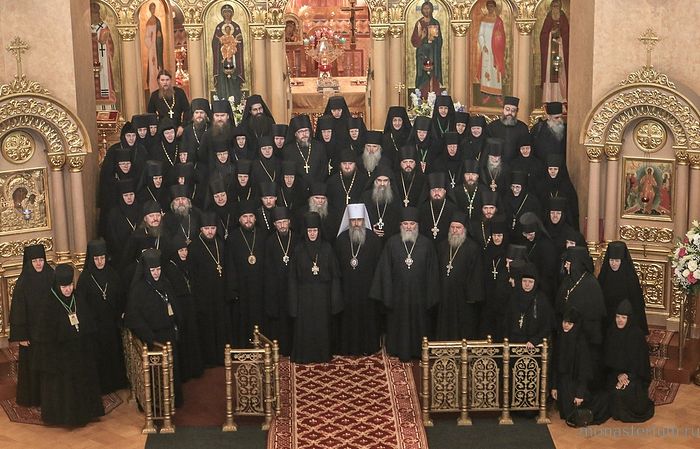 On August 9, 2017, a round-table monastic forum finished its second and final day with four presentations on the theme: “The inner life of a city monastery”, reports Patriarchia.ru. The forum was held in the Novodevichy Convent, St. Petersburg. Participating in the forum where 5 bishops, 42 archimandrites and igumens, 45 abbesses, hieromonks, monks, and ryassaphore monks—160 monastics in total from 65 dioceses of the Russian Orthodox Church. This included Russia, Ukraine, Belorussia, Kazakhstan, Uzbekistan, Tadzhikistan, Kirgyzstan, and the Russian Church Abroad. There were also monastics from the Local Churches of Romania and Greece.

In his presentation entitled, “From the morning watch until night,” Hieromonk Iakov (Stepkin) from the St. Nilus of Stolbensk Monastery in Tver province talked about how the monasteries of the city of Tver arrange their church services to include laypeople and pilgrims. He noted that the spiritual climate in the city has noticeably changed (assumedly for the better) in the city of Tver thanks to the three monasteries functioning there.

Hieromonk Daniel (Konstantinov) of the Zaiconospassky Monastery in the center of Moscow talked about the realities of monastic life for monks whose cell windows overlook a touristy pedestrian zone. One way for the brothers to have some solitude is to go regularly to the monastery sketes located outside of the city. The larger part of their monastic rule is read in the morning, since the daytime brings a load of impressions that make evening prayer more difficult. The brothers also have a separate church for their own services, apart from the parishioners. They also try to go frequently to confession, to defray the damage done to their spiritual state by their location in the very center of a huge metropolis.

Abbess Elizabeth (Pozdniakova), the abbess of the Martha and Mary Convent in Moscow, gave a presentation entitled “Enter your chamber and pray in secret: creating conditions for cell prayer in the monastery.” The abbess of this convent, the obediences of which include social activities of mercy, stressed the importance of providing conditions and schedules to enable monastics to read their prayer rule daily, since monastic life loses its meaning without prayer.

Igumen Arseny (Mosalev), the abbot of the Metochion of Optina Monastery in St. Petersburg, made the observation in his presentation that monks in metochia often have more time for prayer than their brothers in the main monastery, since the flow of pilgrims in those monasteries lasts all year. He noted that it is up to the abbot of the metochion to regulate the monks’ spiritual life and amount of social service. 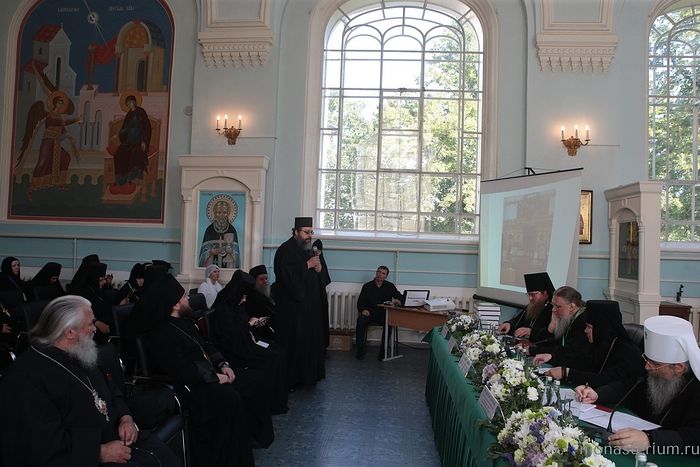 The forum produced the following conclusions:

City monasteries are deeply rooted in monastic tradition. In as early as the fourth century, St. John Chrysostom began the practice of opening monasteries in the capital city. The saint viewed monasticism as the ideal Christian society, the example of which is potent to inspire laypeople for spiritual labors.

In our times, the city monastery can and should be a place of salvation, where there is hope and joy, the struggle with the passions, prayer, and repentance.

Throughout the history of the Russian Orthodox Church, monasteries have always been the “salt of the earth”, centers of spiritual enlightenment, education, and culture. While caring for suffering people, the monastery must also remember the danger of becoming worldly that threatens monastic life.

Ways to avoid this danger could be:

Hospitality and spiritual care for laypeople should not disrupt the inner life of the monastery and its rule.

It must always be remembered that any layperson who visits a city monastery is a pilgrim, and does not have the right to interfere with the monks’ inner life. Services and matters of domestic order are the direct responsibility of the brotherhood.

Modern transportation and communications systems have mitigated the essential difference between monasteries in the city and those farther away from metropolises. Monasticism and Life in the World: A Single Path
Alexei Sidirov

Monasticism and Life in the World: A Single Path
Alexei Sidirov
We are used to drawing a clear dividing line between monasticism and family life, but there is no fundamental difference between them, because they are one and the same path—the path to God. Monasticism is Not a Retirement Hobby
Met. Anthony (Pakanich)

Monasticism is Not a Retirement Hobby
A talk with Metropolitan Anthony (Pakanich) of Boryspil and Brovary (the Ukrainian Orthodox Church of the Moscow Patriarchate)
Such decisions as whether to take up monasticism can only be made after serious and sober reflection. And you need to have an earnest desire and be convinced (following a long period of testing) that this is really your vocation.

On Contemporary Monasticism
Interview with Archbishop Mark (Arndt)
Kristina Polyakova
One of the main problems faced by Christians and especially monastics today is that people are not used to restraining themselves, to enduring, or forcing themselves to do anything, to assume obligations, first and foremost to prayer. For some reason we stubbornly and persistently chase after sin, but good deed—alas!
Comments