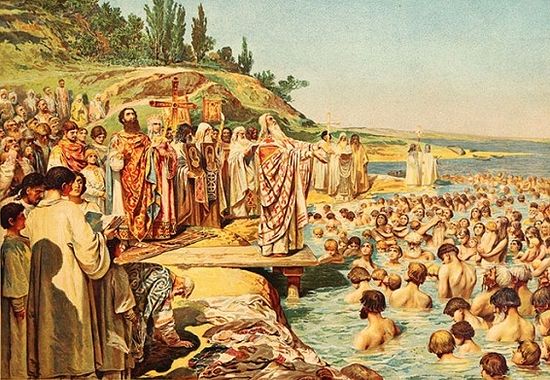 The Baptism of Rus'

How can someone best assimilate into the “culture” of Orthodoxy, even picking up other national customs, without losing their own nationality (being from the USA for example)? How do we find that middle balance of taking the good and leaving the bad from our own culture? Fr. John Whiteford talks about the experience of a convert to Orthodoxy in the cultural context.

There is no such thing as a generic Orthodoxy. Our faith is handed to us by particular people, who come from particular cultural expressions of the faith. Consequently I think a convert can only embrace the particular expression of the faith as they receive it, in the context that they have converted in. Some converts have gone so far as to actually try to adopt the ethnic identity of whatever Orthodox Jurisdiction they convert into—I have even heard of cases in which people Russified their surname. This is of course ridiculous, and is neither necessary, nor helpful.

When I first encountered the Orthodox Faith, it was in the Russian Orthodox context. I was never under any illusions that I could become a Russian, nor did I have any great desire to do so. When the Orthodox Faith was brought to the Slavs, they embraced many aspects of the Orthodox Byzantine culture that brought them the Faith, but they remained Slavs, and with time, they in turn made the Faith their own, and a new Orthodox culture developed. You could go back one step further and talk about the Jewish culture of the Apostles, and the interaction that the Greek converts had with it, which ultimately developed into the Byzantine Greek culture. So while I am not a Russian, nor could I ever become a Russian, my experience of Orthodoxy came in a Russian package, and so I am Russian Orthodox, and love and appreciate the best aspects of Russian culture.

And while we have to embrace the expression of Orthodoxy as we receive it, since we live in a context were we have many other cultural expressions of Orthodoxy, we should resist the temptation to look down on other practices that are no less authentic, but nevertheless different than what we are familiar with.

Someday, God willing, we will see a distinctly American Orthodox culture, but attempts to force that into existence prematurely have met with bad results, and I think this fails to understand how Orthodoxy changes a culture. The Russians did not decide one day that they were going to toss out Greek culture, and concoct a Russian version of it. It happened naturally, as their national Church matured. The American Church has a very long way to go.

However, none of this means that those of us whose language is English need to have the services in a foreign language. The texts of the services have all been translated into English, and so there is no reason why we should not use them.

What a convert should do is try to learn what they can from the most pious and mature Orthodox Christians they encounter in their parish, and emulate them. You will inevitably find some faults in such people, and so those things you should not follow. And you certainly should not emulate the bad habits of those who have grown up on the Church. For example, many Orthodox Christians have a bad a habit of coming to Church late, or coming to Church inconsistently. Ignore the bad example of those people, and imitate the ones that are doing what they should be doing.

One temptation for any convert is to take things to extremes, and so finding the balance is something that you have to work towards. For example, while we can and should learn from monasticism, unless and until you go to a monastery, you should not try to live like you are an Athonite monk. For one thing, it's not going to work, and you are likely to have the wheels of your faith come off at some point. Keep your focus on trying to live like a normal pious layman, and if God leads you to a monastery eventually, you will be a lot more likely to work out your salvation there, if you have learned how to work it out in a balanced way, while living in the world.. We should always remember the wise words of St. Poemen the Great:

“Everything that goes to excess comes from the demons”[1] About Still Being Here: On Converts
Archpriest Andrew Phillips I like the Christian life: Chris Hillman talks about his faith
This is the coolest thing I’ve seen all day. Conversion to Christ—Inside and Outside the Church
Fr. Thaddaeus Hardenbrook

Conversion to Christ—Inside and Outside the Church
Fr. Thaddaeus Hardenbrook
As Orthodox Christians, we conform ourselves to the Church’s apostolic understanding that man is a creature of time and space who sets about ‘redeeming the time’ (Eph. 5:16) and who is created to ‘fill and subdue the earth’ (Gen. 1:28). Thus, our salvation is not momentary but eternal. We do not simply think about Christ, nor does He simply ‘do’ something to us. We choose to desire to pursue Him; therefore we ‘deny ourselves, take up our cross, and follow Him’ (Matthew 16:24).
Comments

T.8/27/2017 8:00 pm
Yes, a preference for the language of the region among converts is not in ayn way an attempt to "reform" or anything of that sort, simply a wish to undrstand exactly what is being said an any given time.

JJ8/25/2017 11:32 pm
In America the situation might be better than in Europe. The Orthodox churches most frequently active / established in Europe, hold their services in Slavonic and Old Greek. Few attendees understand the old languages, clearly. There are many Orthodox living in Europe from various Orthodox communities - Bulgarian, Georgian, Romanian, Moldovan etc - it would make sense to use the common language of the country in which the churches are - French, German, English - at least 50% of the time. With the exception of St Nicholas of Japan, it seems that protestants are far ahead of the Orthodox on this issue - in that the protestants have emphasised using and learning local languages when establishing churches. St Nicholas of Japan, immersed himself in Japanese and established a substantial, solid Orthodox Church in Japan. Orthodox churches need to speak the language of the community in which they find themselves.
×