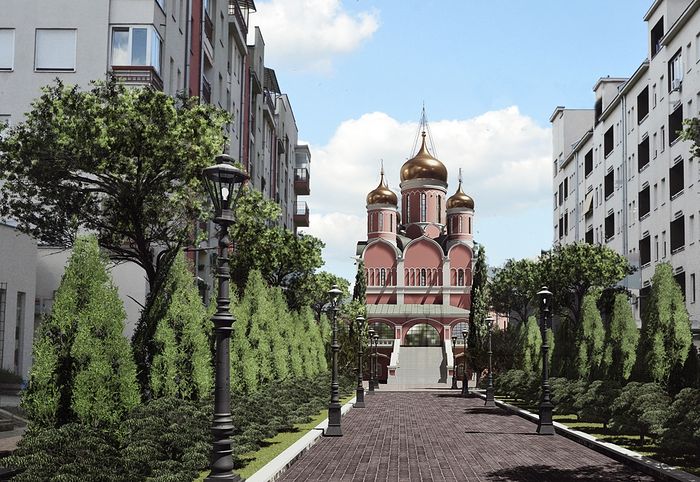 Construction on a Russian-Serbian church is beginning in the city of Banja Luka in Republika Srpska (Bosnia and Herzegovina), which will be executed in the Russian ecclesiastical architectural style. According to Bishop Ephraim of Banja Luka, the foundation of the new church is planned to be consecrated on July 17, 2018, the centenary of the martyrdom of the last Russian tsar Nicholas II and his family, reports pravoslavie.ru.

An agreement was signed in April 2017 with construction company Krajina on the transfer of a plot of land for the construction of a Russian church and cultural center. The project will largely involve local workers, but participants from Serbia and Russia are also expected. Republika Srpska president Milorad Dodik stated that he is proud to be part of a people who are realizing such a project, and Krajina director Borko Djuric expressed a special joy that his employees would have the opportunity to take part in the project. “We, as builders, will try to execute it in the best way,” Djuric said.

The city of Banja Luka is taking upon itself the utility and other expenses for running the church and cultural center.

The draft of the five-domed church with a steepled bell tower is based on the architectural style of an ancient Russian church. The church will have three altars: in the name of the Transfiguration, the Royal Martyrs, and Sts. Symeon and Sava of Serbia, the patriarchs of the Nemanjić dynasty.

Vladyka Ephraim stressed that despite the fact that the idea of building such a church in Banja Luka has been around for 100 years already, it has now gained special importance because the temple will be dedicated to the memory of the Russian Royal Martyrs, glorified by the Russian and Serbian Churches, and not just as a token of gratitude to the Russian emperor.

The first initiative to build a church-memorial in gratitude to Russian Emperor Nicholas II was articulated by Serbian veterans of the First World War. Many Serbs from Bosnia and Herzegovina were drafted into the Austrian army, and, once on the front, died or voluntarily surrendered to the Russian army. Many of them became part of the formed Slavic and Serbian corps and ended the war in the ranks of the liberators of the Motherland. These veterans were eager to build a temple in gratitude to the protector of fellow Slavs Nicholas II, murdered by the Bolsheviks in 1918.

However, this idea did not materialize due to economic difficulties and the outbreak of the Second World War. The project was impossible to carry out for political reasons during Socialist Yugoslavia, and the next attempt at its implementation was interrupted by the war of 1992-1995. Victims of 1992 Trnovo massacre commemorated in Bosnia
A memorial service was held on Tuesdya, August 1, in the Church of St. George in Trnovo (Bosnia and Herzegovina) in honor of the 124 Serbian civilians and Orthodox priest Nedelko Popovich, who were brutally murdered 25 years ago by members of the Croatian-Muslim military units. Ipatiev House Recreated in 3D by Ekaterinburg Museum
Paul Gilbert
A new 3-dimensional computer mock-up on a 50-inch screen of the Ipatiev House has been developed by the staff of the Sverdlovsk regional local history museum in Ekaterinburg. Emperor Nicholas II and his family lived out their final 78 days in the Ipatiev House, as captives of the Bolsheviks after the revolutions of 1917. Church of St. John of Kronstadt consecrated in Bosnia and Herzegovina