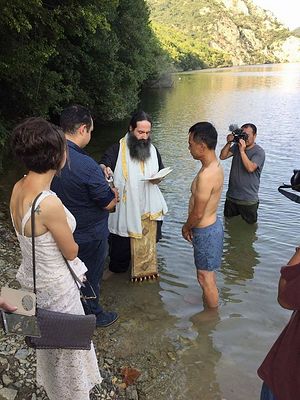 Photo: facebook.com
Another adult Baptism recently took place on the banks of the Haliacmon River, the longest river contained entirely in Greece, flowing 185 miles through the Greek regions of West Macedonia and Central Macedonia, reports Romfea.

This time the new convert traveled thousands of miles from far away China to be baptized at the humble Monastery of the Virgin Kallipetras, in Veria, in northern Greece. The monastery is a male coenobium, dating back to at least 1100 AD. The name of the monastery is connected with a huge rocky column nearby, known as “Kallipetra.” St. Gregory Palamas is among the many saints who have lived and struggled there.

The former Su, now Constantine, received the gifts of the Holy Spirit with exemplary devotion, fasting, and prayer, on Saturday, September 2. The Baptism was celebrated by the abbot of the monastery, Archimandrite Palamas, reports inveria.gr.

Three members of his family traveled to Greece together with him. Interview with Marina Madej, a former Catholic from Poland who Converted to Orthodoxy through Baptism First Group Baptism in South Africa
Deacon Stephen Hayes
On June 4/17 eight people were baptised at St. Thomas’s Church by Father Pantelejmon (Jovanovic) with the blessing of His Eminence Metropolitan Seraphim, Archbishop of Johannesburg and Pretoria. They are Margaret Mphela of Klipfontein View, Midrand and her four children, Nina (Joyce) Aphane and her daughter Sophia (Sophie), and Margaret Mphela’s niece, Mary (Valencia) Semenya of Mamelodi.
Comments

george Barsoum Youssef9/9/2017 11:16 am
Hello Dear,s Happy Weekend Dear,s Am Happy See Your Today . George Hope Vist Your And Pray With Your For The LORD Keep The World From Any Dingers Anything . It,s Good Saterday For Me . Thanks George Barsoum +2012 22 15 23 67 I Use Vaiber And Watssapp