Testimony of an unknown miracle of St. Paisios the Athonite 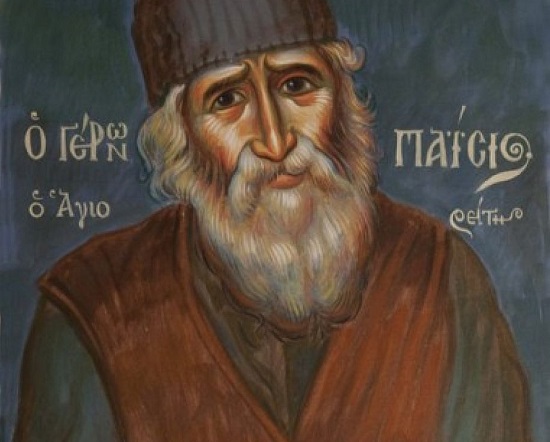 A previously unknown miracle of the great St. Paisios the Athonite has been reported by Spyros Symeon, who himself learned the story on Mt. Athos, at the Panagouda cell where the saint himself had lived. The story has been posted on AgionOros:

There was a couple in Athens that had a daily conflict. The husband was a gambler and a drunk, and his unhappy wife cleaned stairways in apartment buildings from morning till evening to somehow provide for the family. The situation grew worse with each passing day, and then one evening, the woman fell into a frenzy, grabbed a knife in the kitchen and was about to kill her sleeping husband. Suddenly there was an unknown monk blocking her path:

“What are you planning to do? You’ll regret it. Be patient, and God…”

The frightened woman didn’t let him finish his sentence:

The monk answered, “I am from the Holy Mountain. I live in Souroti, not far from Thessaloniki, and I visit Athens too.”

At this point, the mysterious visitor disappeared.

The woman, filled with wonder and trepidation, hid the knife and started to wake her husband up. He did not wake up immediately, because he had gotten seriously drunk the night before. His wife told him that she had just seen an unknown monk in the room:

“He said that he lives on Athos and not far from Thessaloniki, but sometimes he comes to Athens.”

The angry husband answered, “It’s the middle of the night, and you’re telling me these stories. Who can get into our house when all the doors and windows are closed? You imagined it all. Leave me alone with your nonsense.”

He turned over to the other side and fell asleep.

The woman didn’t close her eyes all night. She couldn’t understand what happened, and it bothered her all night.

When dawn broke, she left for work. Not far from her house there is a kiosk where they were just then bringing the latest newspapers and magazines. The woman’s gaze fell upon the cover of one of the publications—the mysterious monk was depicted on it. With tears in her eyes, she read about the monk who hadn’t let her commit this terrible sin and prevented a murder.

This story became known by the monks of St. Paisios’ Athonite Panagouda cell, and that’s where I learned about it.

Wondrous is God in His saints! Closer Than My Own Father: Elder Paisios and His Spiritual Children, Part 1
Ekaterina Stepanova

Closer Than My Own Father: Elder Paisios and His Spiritual Children, Part 1
Ekaterina Stepanova
The path to Athos is open to men only. But in Greece there is a women’s monastery where they live according to strict Athonite rules and serve without electricity, by candlelight. This monastery, in the village of Souroti, was founded by Elder Paisios the Athonite, whose books have been so popular in the past few years in America and Russia. A correspondent of “Neskuchnii Sad” headed to Souroti to meet with people who remember Elder Paisios. Elder Paisios: Defend the Christian Faith, the Family, the Church
Elder Paisios Agiorit
Today there are many who strive to corrupt everything: the family, the youth, the Church. In our day it’s a true witness to speak up for one’s people, for the state is waging war against divine law. It’s laws are directed against the Law of God.
Comments
×