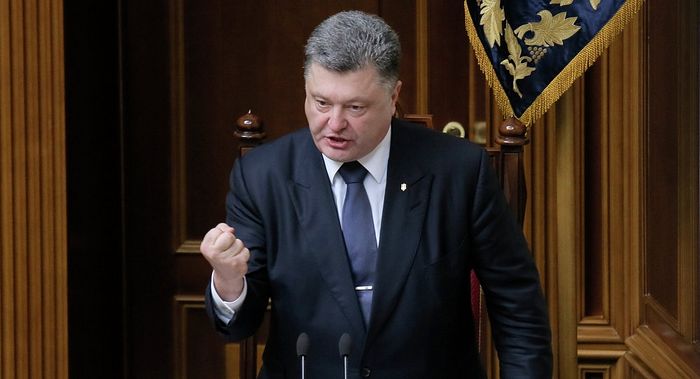 Ukrainian president Petro Poroshenko has said that Ukraine has the right to an autocephalous Local Orthodox Church, and that he will push for its establishment. However, he also stressed that the presence of an autocephalous Church in Ukraine will not mean the banning of any other Orthodox confession within the country, reports Interfax-Religion.

“The recognition of Ukrainian autocephaly by the Ecumenical Patriarch that we are expecting will in no way mean the emergence of a state Church or a banning on the activities of other Orthodox confessions,” the president said in his annual address to parliament on Thursday.

Note that the Verkhovna Rada’s agenda yesterday included eleven bills that relate to Church life, several of which would directly affect and hinder the activities of the canonical Ukrainian Orthodox Church under the Moscow Patriarchate, including legislation that would, in effect, legalize church raids and seizures, which are already regularly happening, often with the participation or consent of local authorities. About 50 churches of the Ukrainian Orthodox Church have been seized by radicals and schismatics over the past three years.

The Union of Orthodox Journalists reports that the president also recalled that the Verkhnova Rada had earlier approved an “historical appeal” to the Ecumenical Patriarchate to grant autocephaly to the Ukrainian Orthodox Church, and that he had also personally written a letter to the patriarch in Constantinople. In 2016, the Ukrainian parliament called upon Patriarch Bartholomew to invalidate the act of 1686 according to which the Kiev metropolitan was, allegedly “in violation of canons,” attached to the Moscow Patriarchate.

“Every citizen chooses his faith and Church, and the state, although separate from the Church, cannot just stand by as other states use the Church institutions dependent on them to achieve their geopolitical goals,” Poroshenko added.

“I want to again draw the attention of His Holiness to the high seriousness of our intentions, to the Ukrainian leadership’s firm political will to solve this problem, which has been on the agenda since 1991. Ukraine has the right to a local Church,” the president affirmed.

Meanwhile, within the Moscow Patriarchate, which includes the canonical Ukrainian Orthodox Church, Poroshenko’s words on creating a local Church with the help of the Ecumenical Patriarch are considered an attempt to gain political capital. “It is obvious that efforts to solve ecclesiastical problems without the participation of the Church itself are doomed to failure, as Patriarch Bartholomew of Constantinople has already stated many times. Perhaps those politicians who are trying to gain political capital should listen to the opinion of the primate sof the local Orthodox Churches and cease interfering in the Church’s internal affairs,” Archpriest Igor Yakimchuk, secretary for inter-Orthodox relations stated today.

For his part, His All-Holiness Ecumenical Patriarch Bartholomew told Archbishop Philaret of Lviv and Galicia of the canonical Ukrainian Orthodox Church at an international theological conference in Bose, Italy yesterday that he will do everything possible to preserve the canonical order of the Ukrainian Orthodox Church. Reports do not include any clarifications indicating how the patriarch intends to help.

The Ecumenical Patriarchate had earlier established a commission for the purpose of examining the Verkhovna Rada’s request for an autocephalous Church. In March of this year, Pat. Bartholomew also told Ukrainian Prime Minister Volodymyr Groysman, “We pray that the Ukrainian people would be united in one Church. The Mother Church of Constantinople will help you find such a united Church.” The patriarch met with former Ukrainian presidents Leonid Kravchuk and Viktor Yuschenko in September of last year, who brought him a petition with 5,000 signatures asking for an autocephalous Church.

It should also be noted that a 2016 poll revealed that a small minority of Ukrainians feel that the creation of an autocephalous Ukrainian Church is necessary. Mikail9/7/2017 4:54 pm
There is already a canonical Orthodox Church in Ukraine. The Patriarch of Constantinople would be very wise to stay out of this political quagmire.

T.9/7/2017 4:02 pm
The man is a western installed neo-fascist puppet. Philaret should not wear an Orthodox Cross but an Iron Cross. That would show his true loyalties.
×