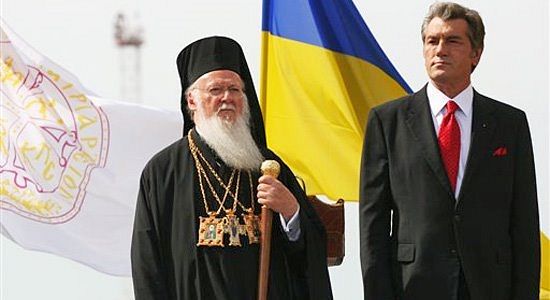 Meeting with the Ecumenical Patriarch in August, two former Ukrainian presidents delivered to him a petition of 5,000 signatures, seeking autocephaly for the Ukrainian Orthodox Church, CatholicCulture.org reports.

Details of the meeting between Leonid Kravchuk and Viktor Yuschenko were not immediately known following the session, but BBC has now reported that the former Ukrainian authorities met with Patriarch Bartholomew seeking the recognition of a Ukrainian Orthodox Church separated from the Moscow Patriarchate which canonically governs the Ukrainian Church headed by His Beatitude Metropolitan Onufry (Berezovsky).

After Ukraine received its independence following the fall of the Soviet Union, then head of the Ukrainian Orthodox Church, Metropolitan Filaret (Denysenko), went into schism as the self-proclaimed patriarch of the so-called "Kiev Patriarchate," which is recognized by neither Moscow nor Constantinople, nor any Orthodox Church in the world. A second schismatic "Orthodox" body, the self-styled Ukrainian Autocephalous Orthodox Church, operates in Ukraine, in addition to the Uniate Greek Catholics. Anthony9/13/2016 4:15 pm
The Phanar has no authority to do so, so they're wasting their time. He should remember his own precarious position in Constantinople before mischief making in other jurisdictions. The only independence required in the Ukraine is the independence of the Russian parts or their reunification with mother Russia. This is the only inevitability and the sooner the better. Let the rest of the western "ukrainians" be subsumed into the morally financially and demographically bankrupt west.
×