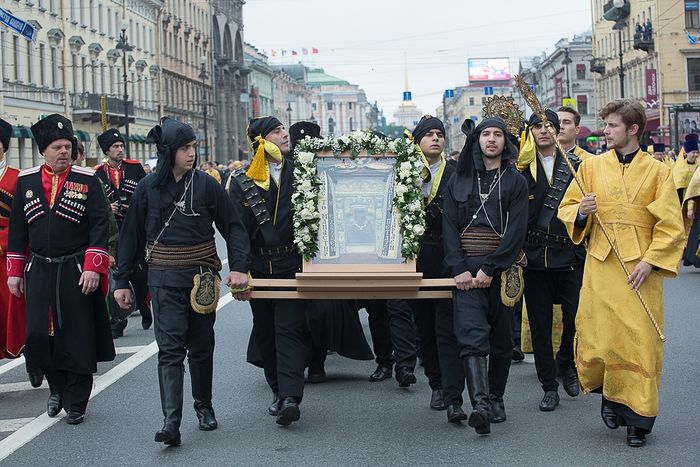 Following the Divine Liturgy, the procession moved along Nevsky Avenue from the Kazan Cathedral to Alexander Nevsky Square.

“The procession was held today for the fifth time. It’s a revival of St. Petersburg tradition. This year the cross procession was headed by the ruling hierarch, Metropolitan Barsanuphius of St. Petersburg and Ladoga. In addition to the wonderworking Kazan Icon of the Mother of God, the revered Greek Panagia Soumela Icon of the Mother of God was carried at the head of the procession,” said archdiocesan communications head Natalia Rodomanova.

The Panagia Soumela icon, by tradition painted by the hand of St. Luke the Evangelist, was brought by the Greek delegation headed by Met. Panteleimon of Veria early Monday morning. The Greek clergy will participate in all festivities dedicated to the day of the heavenly patron of the city, St. Alexander Nevsky. After the procession, the miraculous Greek icon was placed in the Transfiguration Cathedral, where it will be available to the faithful for veneration until September 18. 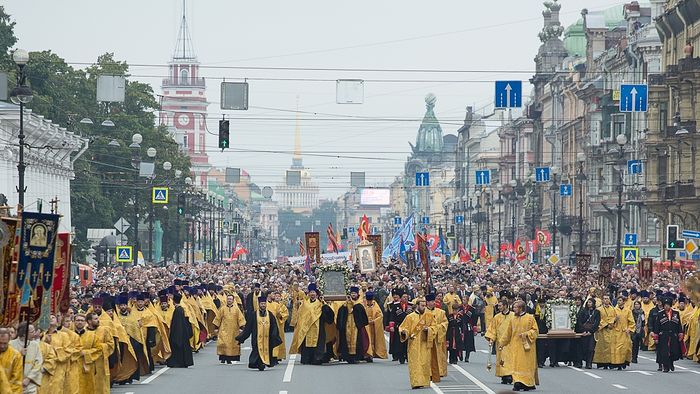 The Divine Liturgy was also celebrated early in the day in the Holy Trinity Cathedral of the St. Alexander Nevsky Cathedral, where the relics of the great saint are housed, by the monastery’s deputy abbot Bishop Nazary of Kronstadt, Bishop Mstislav of Tikhvin, and the brotherhood clergy. Following the Liturgy, the relics of St. Alexander were carried out of the cathedral to the square outside of the lavra where the procession from the Kazan Cathedral came to an end. A moleben was served on the square before the relics of the right-believing prince by Met. Barsanuphius.

The St. Petersburg hierarch also offered a homily following the moleben in which he stressed that the example of the right-believing prince St. Alexander Nevsky is particularly important in this year of the centenary of the tragic events that shook the country in 1917, when the new communist “ideal” of a man who would change the world through his own strength rather than through the grace of God was promulgated. St. Alexander, on the other hand, was a great ruler, statesmen, and warrior, and yet entrusted himself wholly to the protection of God, even taking monastic vows before his death. The archbishop wished all gathered to be inspired by the life of St. Alexander “to grow in faith and oneness of mind, working for the good of the Fatherland and our hometown with diligence and sacrifice.”

“According to tentative estimates, about 100,000 people participated in the cross procession—not only residents of St. Petersburg, but also guests from various regions of Russia, and also the Greek delegation,” Rodomanova stated. The “Savior” Cross procession held in St. Petersburg
This year’s procession was also dedicated to the memory of holy Hieromartyr Benjamin of Petrograd and Gdov and Archimandrite Sergius (Shein), and martyrs Yuri Novitsky and John Kovsharov, who were executed on the night of August 12-13, 1922. The procession likewise commemorated all the New Martyrs and Confessors of Russia who suffered for the faith after 1917. 150th anniversary of birth of Venerable Seraphim of Vyritsa marked in St. Petersburg by city-wide Cross procession
Historically the Cross procession occurred every year on August 1/14, on the feast of the Procession of the Precious Wood of the Life-giving Cross of the Lord around “Savior on Sennaya” in memory of the deliverance of St. Petersburg from cholera. Reviving the lost tradition, this year the Cross procession was organized by the Union of Orthodox Entrepreneurs, and the parishes of Venerable Seraphim of Vyritsa in Bolshoi Gostiny Dvor and of the Dormition on Sennaya.
Comments
×