Saint Simeon the Stylite was born in the Cappadocian village of Sisan of Christian parents, Sisotian and Martha. At thirteen years of age he began to tend his father’s flock of sheep. He devoted himself attentively and with love to this, his first obedience.

Once, after he heard the Beatitudes in church, he was struck by their profundity. Not trusting to his own immature judgment, he turned therefore with his questions to an experienced Elder. The Elder readily explained to the boy the meaning of what he had heard. The seed fell on good soil, and it strengthened his resolve to serve God.

When Simeon was eighteen, he received monastic tonsure and devoted himself to feats of the strictest abstinence and unceasing prayer. His zeal, beyond the strength of the other monastic brethren, so alarmed the igumen that he told Simeon that to either moderate his ascetic deeds or leave the monastery.

Saint Simeon then withdrew from the monastery and lived in an empty well in the nearby mountains, where he was able to carry out his austere struggles unhindered. After some time, angels appeared in a dream to the igumen, who commanded him to bring back Simeon to the monastery.

The monk, however, did not long remain at the monastery. After a short while he settled into a stony cave, situated not far from the village of Galanissa, and he dwelt there for three years, all the while perfecting himself in monastic feats. Once, he decided to spent the entire forty days of Great Lent without food or drink. With the help of God, the monk endured this strict fast. From that time he abstained from food completely during the entire period of the Great Lent, even from bread and water. For twenty days he prayed while standing, and for twenty days while sitting, so as not to permit the corporeal powers to relax.

A whole crowd of people began to throng to the place of his efforts, wanting to receive healing from sickness and to hear a word of Christian edification. Shunning worldly glory and striving again to find his lost solitude, the monk chose a previously unknown mode of asceticism. He went up a pillar six to eight feet high, and settled upon it in a little cell, devoting himself to intense prayer and fasting.

Reports of Saint Simeon reached the highest church hierarchy and the imperial court. Patriarch Domninos II (441-448) of Antioch visited the monk, celebrated Divine Liturgy on the pillar and communed the ascetic with the Holy Mysteries.

Elders living in the desert heard about Saint Simeon, who had chosen a new and strange form of ascetic striving. Wanting to test the new ascetic and determine whether his extreme ascetic feats were pleasing to God, they sent messengers to him, who in the name of these desert fathers were to bid Saint Simeon to come down from the pillar.

In the case of disobedience they were to forcibly drag him to the ground. But if he was willing to submit, they were to leave him on his pillar. Saint Simeon displayed complete obedience and deep Christian humility. The monks told him to stay where he was, asking God to be his helper. 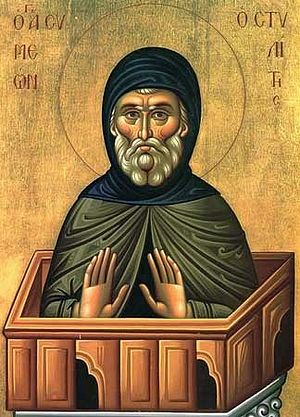 Saint Simeon endured many temptations, and he invariably gained the victory over them. He relied not on his own weak powers, but on the Lord Himself, Who always came to help him. The monk gradually increased the height of the pillar on which he stood. His final pillar was 80 feet in height. Around him a double wall was raised, which hindered the unruly crowd of people from coming too close and disturbing his prayerful concentration.

Women, in general, were not permitted beyond the wall. The saint did not make an exception even for his own mother, who after long and unsuccessful searches finally succeeded in finding her lost son. He would not see her, saying, “If we are worthy, we shall see one another in the life to come.” Saint Martha submitted to this, remaining at the foot of the pillar in silence and prayer, where she finally died. Saint Simeon asked that her coffin be brought to him. He reverently bid farewell to his dead mother, and a joyful smile appeared on her face.

Saint Simeon spent 80 years in arduous monastic feats, 47 years of which he stood upon the pillar. God granted him to accomplish in such unusual conditions an indeed apostolic service. Many pagans accepted Baptism, struck by the moral staunchness and bodily strength which the Lord bestowed upon His servant.

The first one to learn of the death of the saint was his close disciple Anthony. Concerned that his teacher had not appeared to the people for three days, he went up on the pillar and found the dead body stooped over at prayer. Patriarch Martyrius of Antioch performed the funeral before a huge throng of clergy and people. They buried him near his pillar. At the place of his ascetic deeds, Anthony established a monastery, upon which rested the special blessing of Saint Simeon.

We pray to Saint Simeon for the return to the Church of those who have forsaken Her, or have been separated from Her.

You were a pillar of patient endurance, / Having imitated the forefathers, O Venerable One: / Job in suffering, and Joseph in temptations. / You lived like the bodiless ones while yet in the flesh, O Simeon, our Father. / Beseech Christ God that our souls may be saved.

Seeking the things of the Highest, / And having made your pillar a fiery chariot, you were joined to the heights. / Therefore, you have become a companion to the angels, O Venerable One, / And with them you are praying incessantly to Christ God for us all. Saint Daniil the Hermit
Commemorated December 18/31
In thee, oh, Father, the one created in the image of God was saved, for taking up the Cross, thou didst follow Christ and, by thy deeds didst teach us to overlook the flesh, for it is perishable, but to be attentive to the soul since it is immortal. Therefore, oh, pious Father Daniil, your spirit rejoices with the angels. St. Savva the Sanctified and His Return to the Holy Land in 1965
Commemorated December 5/18
When he was seventeen years old he received monastic tonsure, and attained such perfection in fasting and prayer that he was given the gift of wonderworking.
Comments
×