Mathilde is “fabrication of the worst taste”—Moscow State University historians 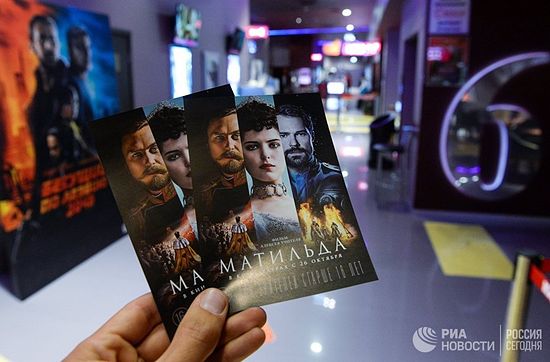 The Moscow Patriarchate issued a report on Monday on the film “Mathilde” from two Russian historians, who, in their conclusion, described the film as having “no relation to the historical events related in it,” reports RIA-Novosti.

“The script of the film ‘Mathilde,’ given to two famous Russian historians for review a few months ago—the president of the history department of Moscow State University Professor and Academician of the Russian Academy of Sciences Sergei Pavlovich Karpov and the supervisor of the Russian State Archives and head of the 19th-early 20th century Russian history department of Moscow State University Sergei Vladimirovich Mironenko—has been harshly criticized on their part,” a message of the Synodal Department for Church and Society and the Media reads.

As the historians noted, the film’s story “has no relation to the historical events related in it, except that only the names of the characters are true, and the heir-tsarevich had a romance with Mathilde Kschessinkaya.” Everything else in the film, is, according to Kaprov and Mironenko a “fabrication of the worst taste.”

“Already the first scene evokes a smile and strong bewilderment. Mathilde Kschessinkaya did not run up to the choir of the Dormition Cathedral in the Moscow Kremlin during the coronation of Emperor Nicholas II, and did not yell, ‘Nicky, Nicky!’ and the emperor himself did not pass out. It’s all a fabrication of the script writer,” the professors write.

According to the historians, the screenplay is filled with inventions, having no relation to the true events or to the feelings of the characters.

“What more can be said about the scene where Nicholas’ father, Emperor Alexander III chooses a mistress for his son from among the ballerinas of the Mariinsky Theatre? Do we have to explain that such vulgarity could be born only in the mind of someone with no clue about the reality of the relationships in the royal family, and in the court environment,” the historians write.

While Tsar Nicholas and his wife Alexandra were not sinless people, as the historians note, their lives and relationship had no place for the vulgarity which is included in the script of the film. “There were different situations in their lives, and their activities are variously evaluated by historians. But one thing they did not have—vulgarity and filth. But it is precisely vulgarity and filth of the lowest order that the script writer gives for historical truth,” Kaprov and Mironenko write in conclusion.

In an article in the Independent Gazette, Bp. Tikhon (Shevkunov) of Egorievsk, abbot of Sretensky Monastery, notes that the relationship between Nicholas II and Mathilde existed only before his marriage to the Empress Alexandra.

“Nicholas was immensely happy. He parted with [Mathilde] without drama or tears: He asked for her forgiveness, and promised to help in everything. They decided to stay good friends… but through distance communication. Communication was broken off once and for all in the same year as [Nicholas and Alexandra’s] engagement, 1894,” writes the head of the Patriarchal Cultural Council.

Moreover, Nicholas II told his bride about the relationship with the dancer, to which Princess Alexandra responded to him in a letter: “I love you even more since you told me this story. Your trust touches me so deeply... will I be worthy?”

As noted by Bp. Tikhon, the period from 1894 to 1896, when Alexandra became Orthodox and was married to Nicholas, “was the calmest and happiest in the life of the young married couple.” Producers planned screening of incendiary film Mathilde on day of Beheading of St. John the Baptist

Producers planned screening of incendiary film Mathilde on day of Beheading of St. John the Baptist
While the film Mathilde, which has proven to be extremely controversial in Russian society, is set to be released in October, it already had a screening in Vladivostok last Tuesday. A second screening was scheduled for a Moscow theater on Monday, but ended up being canceled the same day. Local heads request that film “Mathilde” not be shown in Chechnya and Dagestan
President of the Chechen Republic Ramzan Kadryov sent a letter to Russian Minister of Culture Vladimir Medinsky, which was followed later by a letter from First Deputy Chairman of the government of the Republic of Dagestan Anatoly Caribov.
Comments
×