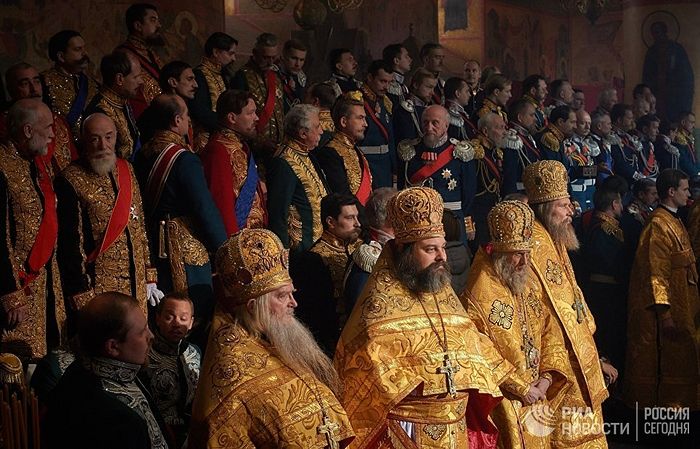 Although he believes the movement to ban the film “Mathilde” is a dead end, Bishop Tikhon (Shevkunov) of Egorievsk, abbot of Moscow’s Sretensky Monastery and president of the Patriarchal Cultural Council, has stated that he personally refused to be a consultant for the filming, and that the trailer of the film “horrified” him, reports RIA-Novosti. The hierarch spoke about this at a recent lecture he gave at the opening of the historical park “Russia—My History” in Ekaterinburg.

“The director Uchitel, who I don’t personally know and whose films I’ve never seen, called me, and asked, ‘Would you like to become a consultant for the film?’ I said, ‘Give me an official request. I will look at the request and then answer you.’ The director Uchitel said, ‘The script is already ready.’ I said, ‘The script?... First you make a request to consultants, and then you develop the script.’ He said, ‘The film is already almost ready.’ I said, ‘That’s great! You want a consultant on a film that’s nearly ready. Why?’”

The bishop noted that he asked the director to send him the script, but, according to him, when it was done he had already seen the trailer for the film. “It horrified me, because there was written in huge letters, ‘The biggest historical blockbuster of the year,’… Then there was written, ‘Secrets of the house of Romanov,’ he stated.

Bp. Tikhon stated that he was outraged by the phrase in the trailer spoken by Emperor Alexander III: “I am the only Romanov who has not lived with ballerinas.” The president of the Patriarchal Council for Culture called it “breathtaking in its vulgarity.” “I told all of this to the director,” he continued, noting that, in the end, he refused to be a consultant.

Bp. Tikhon earlier called the film a “vulgar fraud” and “slander,” stating that it belongs to the genre of fantasy. Speaking in an interview with Russian Gazette, he asked rhetorically, “Why do they make audiences believe in the historicity of these contrived heartbreaking scenes of a ‘love triangle’ in which Nicholas, both before and after marriage, is melodramatically torn between Mathilde and Alexandra?” adding, “What is that? The author’s vision? No—it is slander against real people.”

Despite his strong distaste for the film, Bp. Tikhon believes the movement to ban the film will be unsuccessful. “I think that banning the film is a dead-end. We have no tools for banning… I know it will be impossible to ban it. We do not have censorship, but we must tell the truth of history. It’s a lie about the royal family, a lie about our history, and from an artistic point of view, it’s just an unbearable vulgarity,” the hierarch concluded at his Ekaterinburg lecture.

The movie is dedicated to the life of the ballerina Mathilde Kschessinska, who once had a relationship with the future tsar and Royal Martyr Nicholas II. The main role is played by Polish actress Mikhalina Olshansky, and that of the then-tsarevich Lars Eidinger from Germany. Many believe the film is historically inaccurate, provocatively distorting the truth of the pious and holy emperor. Local heads request that film “Mathilde” not be shown in Chechnya and Dagestan
President of the Chechen Republic Ramzan Kadryov sent a letter to Russian Minister of Culture Vladimir Medinsky, which was followed later by a letter from First Deputy Chairman of the government of the Republic of Dagestan Anatoly Caribov. Orthodox protesting new film’s portrayal of Tsar Nicholas II with support from Mt. Athos
Orthodox activists of the Forty Times Forty movement protested against the new film “Mathilde,” which deals with the early life of the Royal Martyr Tsar Nicholas II, on Friday, standing with banners near the State Duma, the Public Prosecutor, and the Ministry of Culture.

British royal family invited to Ekaterinburg for centenary of Romanov martyrdom
“Inasmuch as the British and Russian crowns were bound by blood, Roizman conveyed through the ambassador an invitation to the members of the British Royal Family to attend the ‘Royal Days’ events in the Ural capital,” reads a message on the mayor’s site.
Comments

T.9/12/2017 9:11 pm
It surprizes my that the west seeks to attack Nicholas II for no particular reason, especially when there were czars, for example Ivan, Peter, or Catharine, whose...cough...idiosyncracies would give much greater material for a muck racking film. Only Nicholas, who, to my knowledge, never engaged in obsurd numbers of remarriages, cutting peoples' tongues out, abolishing the Patriachate, etc, is demonized in western propaganda.
×