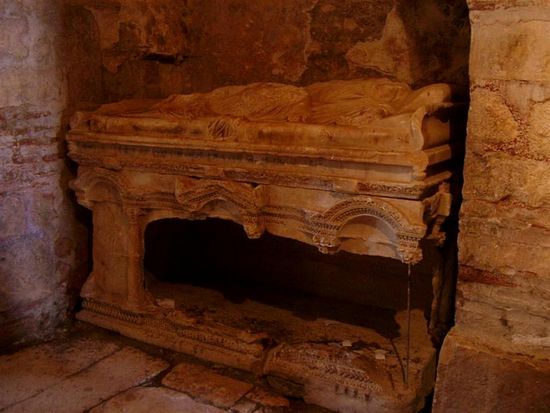 Turkish experts claim that what was believed to be the original grave of St. Nicholas (pictured) was in fact the grave of an anonymous priest. They now believe that his undamaged grave was discovered in St. Nicholas Church, in Demre, Turkey.

Turkish archaeologists believe they may have discovered the tomb of St. Nicholas below a church in the Demre district of Turkey’s southern Antalya Province, reports the Daily Sabah.

Demre is known as the birth place of the great hierarch of Myra. According to Cemil Karabayram, the head of the Antalya Monument Authority, a special section containing a grave site was discovered beneath St. Nicholas Church while conducting digital surveys.

“We believe this shrine has not been damaged at all, but it is quite difficult to get to it as there are mosaics on the floor” Karabayram said, but he remains optimistic about reaching St. Nicholas’ remains. Archaeologists at the site have already conducted groundwork, and a search has begun for researchers from eight different fields of study to continue the work at the site.

“We have obtained very good results but real works start now. We will reach the ground and maybe we will find the untouched body of St. Nicholas. We appointed eight academics of different branches to work here. If our expectations are met, Demre will be at full capacity,” Karabayram said, noting that the discovery may arouse discussions at an international level, according to Hürriyet Daily News.

Excavation leader Professor Sema Doğan was shocked to hear about the finding, Karabayram said, adding that tourism around the region will be positively affected if they manage to find St. Nicholas’ untouched remains:

“The world’s eyes will be set on here. We claim that St. Nicholas has been kept in this temple without any damage. We are at the last stage. If we get the results, Antalya’s tourism will gain big momentum. We will start discussions at an international level after the excavations. The head of the excavations is Professor Sema Doğan and she is in shock, too. We have been working for three months and at the last stage, the excavation field will be extended. We cannot enter there right now because experts have to first work on the mosaics,” Karabayram said.

The archaeologists’ claims over the 1,674-year-old relics of St. Nicholas clash with the history accepted by both the Orthodox and Catholic Church. St. Nicholas was interred in the church in Demre, formerly known as Myra, in 343, where his relics remained until the 11th century, when they were taken during the Crusades to Bari, Italy, where they now lie in the Basilica di San Nicola. However, Turkish experts are now claiming the wrong bones were removed and those taken abroad belong to an anonymous priest. Oldest Christian church in Turkey to be opened to visitors

Oldest Christian church in Turkey to be opened to visitors
The newly-restored basilica was originally dedicated in honor of the Holy Martyr Neophytes who was slain by Roman legionaries in 303 AD precisely on the site of the church. Kallistos10/4/2017 10:50 pm
What interest would they have in an orthodox Saint? How about making a ton of money off tourism. Especially if they can convince people these are St.Nicholas' relics. This story will be milked for whatever it's worth!

Deacon Nicholas10/4/2017 9:49 pm
The Turks have been trying to claim "Santa Claus" (ugh) for years. It's sheer commercialism. They've tried to get Italy to return the relics of St Nicholas in Bari (which the Church has always considered authentic, and given the myrrh exuded and the facial reconstruction, it seems so). That failed, so they're trying this gambit. Let no one be deceived!

Steve Nelson10/4/2017 5:26 pm
The Turks are Muslim. What interest would they have in an Orthodox saint, or even in a church on general? You would think that they would destroy it to gain favor with Allah.
×