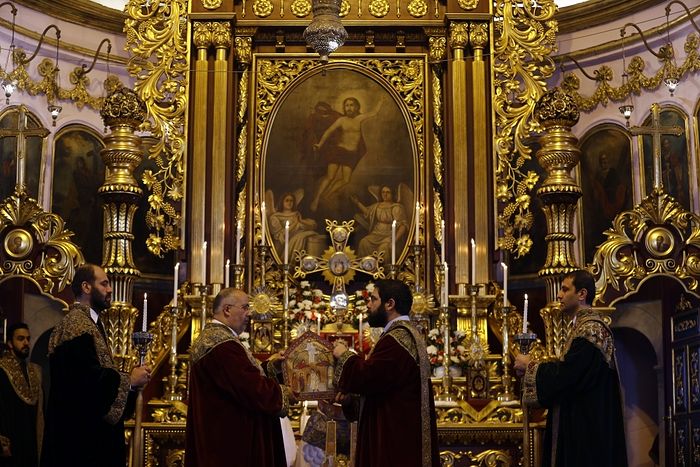 Priests hold a mass at Surp Asdvadzadzin Patriarchal Church in Istanbul, Turkey, April 24, 2015, as part of events to commemorate the victims of mass killings of Armenians by Ottoman Turks.

Turkish archaeologists excavating the world's largest known underground city in the Cappadocia region of central Turkey have found a fifth century underground church with scenes of Jesus rising into the sky.

"This place is even bigger than the other historical churches in Cappadocia. It was built underground and has original frescoes that have survived to this day," the mayor of Nevsehir, Hasan Unver, told Hurriyet Daily News.

"We didn't even think of finding such a structure when we first started works. But excavations and cleaning work are continuing and we hope to find new data relating to the history of Cappadocia," the mayor said.

"It is reported that some of the frescoes here are unique," Unver continued. There are exciting depictions like fish falling from the hand of Jesus Christ, Him rising up into the sky, and the bad souls being killed. When the church is completely revealed, Cappadocia could become an even bigger pilgrimage center of Orthodoxy."

Unver said the church may have been built in the fifth century AD.

The thin walls of the church collapsed because of snow and rain, but can be restored, according to the archeologists.

"We have stopped work in order to protect the wall paintings and the church. When the weather gets warmer in the spring, we will wait for humidity to evaporate and then we will start removing the earth," archaeologist Ali Aydin was quoted as saying.

Aydın also said that the side walls of the church were still underground and the frescoes there are likely to be intact. "Only a few of the paintings have been revealed. Others will emerge when the earth is removed. There are important paintings in the front part of the church showing the crucifixion of Jesus and his ascension to Heaven. There are also frescoes showing the Apostles, the saints and other prophets Moses and Elyesa [Elijah]."

In December 2014, the archeologists found the underground city, consisting of about 3.5 miles of tunnels, churches and escape galleries dating back around 5,000 years. The city was found under Nevsehir fortress and the surrounding area during an urban transformation project carried out by Turkey's Housing Development Administration.

Christianity's spread to Turkey started in the early fourth century, and these discoveries could help archaeologists learn more about the practice of early Christianity in the region. Archaeologists Discover Oldest Church of Medieval City Drastar in Bulgaria's Silistra
The ruins of what was the oldest Christian church from the period of the Middle Ages in the ancient and medieval city of Drastar (known as Durustorum in the Roman period) have been discoveredduring the continuing rescue excavations in Bulgaria’s Danube city of Silistra.
Comments

Edmond2/23/2016 5:10 am
My Grand parents came from near Cappadocia. That whole area was 100% Christian until the massacres by the Turks.

Roseller L. Saga2/12/2016 4:22 am
This proves that nation TURKEY was a former a christian country. PLease preserve those precious materials and the church itself.
Those things will become a national heritage. Thanks to the people responsible for discovering it. God bless!