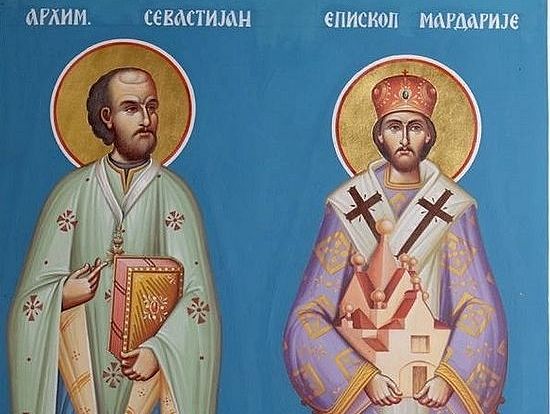 The names of the most recently-glorified American saints, Sts. Sebastian and Mardarije, have been officially added into the liturgical calendar of the Russian Orthodox Church, reports patriarchia.ru.

Local Churches tacitly accept the canonizations of the other Local Churches, but they can be officially adopted into another local calendar by decision of the Holy Synod, with the relevant services being translated for celebration.

At a session held on Friday, the Holy Synod of the Russian Orthodox Church heard the report of the chairman of the Department for External Church Relations Metropolitan Hilarion (Alfeyev) of Volokolamsk on the canonization of the holy hierarch Bishop Mardarije (Uskokovic) and Hieromonk Sebastian (Dabovich) by the Serbian Orthodox Church at its May 29, 2015 session.

The annual commemorations of St. Mardarije of Libertyville, Bishop of America and Canada, and St. Sebastian of San Francisco and Jackson are observed on November 29/December 12 and November 17/30 respectively. Icon with relics of St. Mardarije gifted to Mt. Athos from America

Icon with relics of St. Mardarije gifted to Mt. Athos from America
A pilgrimage group from St. John the Baptist Cathedral in Brooklyn, headed by the rector and dean of the New York district of the ROCOR Eastern American Diocese Archpriest Alexander Belya, gifted an icon of the recently-glorified Serbian saint of the American lands the Holy Hierarch Mardarije of Libertyville to St. Panteleimon’s Monastery on Mt. Athos on September 17.