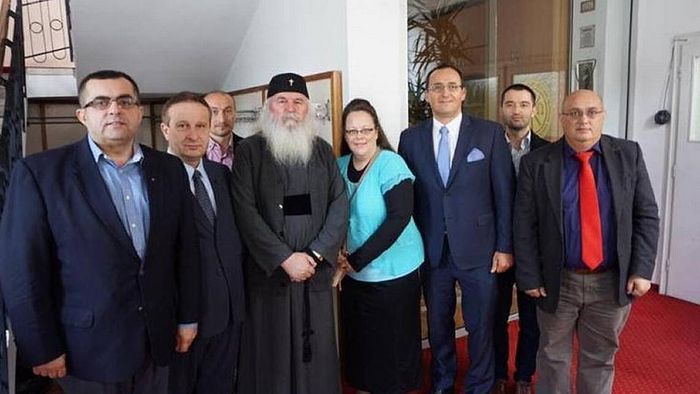 Kim Davis, the Kentucky country clerk who refused to sign same-sex marriage licenses in the wake of the Supreme Court’s Obergefell v. Hodges decision in 2015, is currently on a speaking tour in Romania, sharing her experiences in the battles surrounding same-sex marriage and freedom of religion in the U.S., reports the Lexington Herald Leader.

The 9-day trip comes as a petition signed by more than 3 million Romanians, calling for marriage to be constitutionally defined as between one man and one woman, awaits final approval in the Senate, after which a public referendum can be held. The petition has already been unanimously approved by Romania’s Constitutional Court.

The petition of course enjoys the support of the Romanian Orthodox Church. In America, the Assembly of Canonical Orthodox Bishops released a statement following Obergefell v. Hodges stating their disagreement with the decision to legalize gay marriage nationwide, calling “upon all Orthodox Christians in our nation to remain firm in their Orthodox faith, and to renew their deep reverence for and commitment to marriage as taught by the Church,” and “upon our nation’s civic leaders to respect the law of Almighty God and uphold the deeply-rooted beliefs of millions of Americans.”

Davis, who spent 5 days in jail for her refusal to sign same-sex marriage licenses, is in Romania with Harry Mihet, vice president of legal affairs and chief litigation counsel of the Orlando-based Liberty Counsel, which represented Davis in 2015. Mihet is originally from Romania, according to the Washington Examiner.

Davis, who remains the Rowan Country clerk, was eventually given a religious accommodation that allows her to decline to sign same-sex marriage licenses.

According to a Liberty Counsel press release, Davis and Mihet “are holding conferences in Romania's largest cities, including Bucharest, Cluj, Sibiu, Timisoara and Iasi. Their message is simple and based upon the recent lessons learned in the United States: same-sex ‘marriage' and freedom of conscience are mutually exclusive, because those who promote the former have zero tolerance for the latter.”

Mihet also stated in the release that Davis’ story resonates with Romanians, who “are receiving her tearfully and very warmly, because they can still remember the not-so-long-ago days when they were themselves persecuted and imprisoned for their conscience.”

The pair have already met with two archbishops of the Romanian Orthodox Church and members of parliament, and they are giving a number of television and radio interviews. Christian Clerk Ousted For Stance on Gay Marriage
Linda G. Summers was dismissed from her county job simply for requesting a "religious accomodation" to not be forced to process homosexual marriage license applications.
Comments