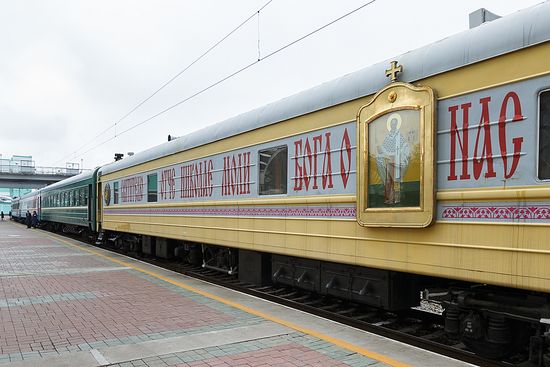 The 22nd social-charitable and spiritual educational campaign of the train “For the Spiritual Revival of Russia” was launched on Wednesday at the station in Novosibirsk, Russia, reports the Novosibirsk Diocese.

This year, the event is dedicated to the 80th anniversary of the central Russian Novosibirsk Province. The more than 200 participants on the train will cover 19 regions throughout the Province.

Missionaries, priests, artists, social workers, doctors, and educational and cultural figures gathered at the train station, accompanied by Metropolitan Tikhon of Novosibirsk and Berdsk, the Deputy Governor of the Novosibirsk Province Alexander Petrovich Titkov, and the Deputy Head of the Novosibirsk railroad George Borisovich Manakov.

Following the moleben for travelers, Met. Tikhon addressed the participants in the missionary activity with a parting word: “You will bring the joy of the holiday—the jubilee of the province to the villagers, and grant spiritual, social, and medical aid, and educational activities. The villagers await you and are preparing a warm reception.”

“This campaign,” dedicated to helping villagers and supporting the residents of the Siberian hinterlands, “makes us a single people, connecting the city and the village,” the bishop added.

“When we talk about the spiritual rebirth of Russia, we understand that it is not just a call to our citizens and compatriots to return to our historical spiritual roots, but it is also a painstaking collaborative work to daily bear the concrete spiritual rebirth of our Novosibirsk Province,” Deputy Governor Titkov stated in his welcoming speech.

The campaign will continue through October 20.

In 2012, medical specialists provided their services at the train stations, and diagnostic rooms were available. Doctors helped about 1000 people. Social and charitable assistance was given to the needy and the poor (in excess of $11,500). There were 60 packages of free medicines transferred to obstetric units. The specialists of the Ministry of Social Development also provided their assistance to 2,500 people.

Spiritual and educational conferences, round table discussions, and meetings with students and parents were held in 65 districts. More than 9,000 people participated. The performances of professional and amateur artists, poets, writers, film screenings, drama performances, and exhibitions were held as a part of the creativity program (a total of 170 events).

The event involved 30 thousand people in 132 villages of 19 districts of Novosibirsk. All services of the missionary train are provided on a charitable basis. Heaven is calling
Photogallery
This story is not about church walls, it is about something irrational and at the same time extremely important for us and local villagers alike. A priest from Naryan-Mar visits a nomadic reindeer-breeding community + photos
Clergyman of the Naryan-Mar Diocese Priest John Malikov visited the Yamb-To nomadic community of reindeer-breeders. His task was to tell the local residents about the Christian faith. Has post-Soviet Russia really morphed into a bulwark of Christian morality?
This willingness to call a spade a spade from a stage visible to the entire world, while the leaders of the West most willing to put up a fight are currently outflanked, has drawn new attention to President Putin
Comments

Josee Allen10/13/2017 6:20 pm
Wonderful! I had hoped that relations between America and Russia would be better, unfortunately it is this renewal of The Faith in Russia which terrifies the Globalists like The Clintons, Obama, Soros, et al and they work tirelessly to destroy our friendship.They also try to destroy Christianity in the West.This picture of the train will remain in my heart...It is such a powerful symbol of The Faith of Our Fathers. Thank you!
×